Currently, Pt electrocatalysts supported on carbon black (Pt/C) are typically used in polymer electrolyte fuel cells (PEFCs). Carbon black has high conductivity for conducting electrons and high specific surface area for supporting Pt catalysts. However，during the PEFC start-stop cycles, the potential of the cathode can reach up to 1.5 V, resulting in a severe carbon corrosion (1,2) . In addition, in the fuel starvation, carbon corrosion may also occur at the anode. To solve this carbon support corrosion problem, we have developed SnO2 and TiO2 supports dispersed on carbon nanofibers acting as the conductive backbone, exhibiting high durability (3-5) . However, also in this case, the carbon material is still used and the possibility of carbon corrosion may remain.

Metallic materials generally have higher conductivity, in comparison with carbon materials and oxide materials. Here, we selected titanium as catalyst supports. The surface of metallic titanium is naturally oxidized to form stable TiO2, so that titanium supports may exhibit high durability under the strongly-acid PEFC condition. In addition, if the porous Ti sheet also acts as the gas diffusion layer (GDL), membrane electrode assembly (MEA) can be prepared just by the heater pressing. In this study, we prepare a carbon-free all-metallicelectrode structure, consisting of Pt electrocatalyst, Ti-based catalyst support, and Ti-based GDL for improving PEFC electrodes with both high activity and durability by using the porous titanium sheet support.

The porous Ti sheet was etched with 5M NaOH solution at 60°C for 1 hour. After that, heat treatment was performed at 500°C in air for 5 hours, or at 400°C in 5%H2-N2 for 30 minutes. Pt nanoparticles were decorated on the porous Ti sheet by the arc plasma deposition (APD). The microstructure of the Pt/Ti sheet was observed by SEM，STEM, and TEM. Electrochemical measurements were made with the half cell and the single cell. 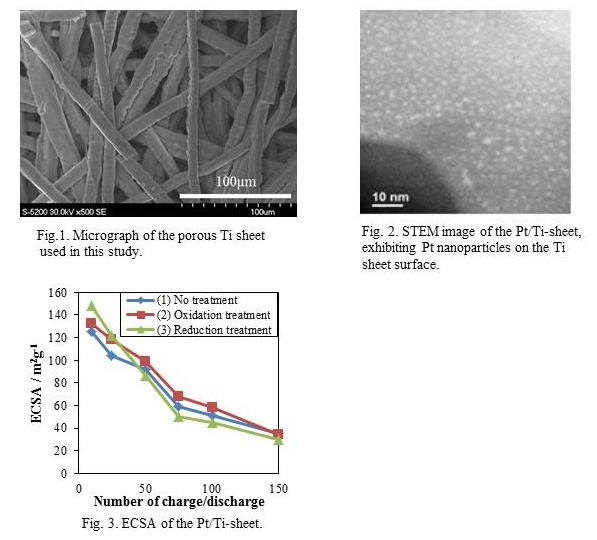