Chesapeake 11 (Gaylord National Resort and Convention Center)
S. Takemura and K. Ogasawara (Department of Chemistry, Kwansei Gakuin University)
[Introduction] It is important for trap levels to capture carriers for persistent phosphors, and the properties depend on the positions of the trap levels within the band gap [1]. It is necessary to estimate the positions of impurity levels which work as trap levels for material design of the persistent phosphors. As one of the ways, the position of the impurity level within the band gap can be estimated by calculating the charge transfer transition energy from the valence band (Ligand to Metal Charge Transfer: LMCT). However, calculation of the LMCT based on quantum theory is exceedingly difficult in d electron system like transition metal and f electron system like rare earth ion because the calculation requires to consider many-electron effect, symmetry and relativistic effect such as spin-orbit interaction. Recently, we successfully reproduced the LMCT energies and their experimental trend of transition metal ions in α-Al2O3 by performing configuration interaction (CI) calculation using the DVME method [2]. From these results, we expect that the relativistic DVME method can be also applied to rare earth ions. In this study, as a first approach, in order to obtain the LMCT energy for various trivalent RE ions in REO813- cubic model cluster, we performed first-principles calculations using the DVME method and constructed the theoretical energy diagram of the rare earth ions, and compared it with the reported LMCT energies in YPO4 [3] and YAG [4].

[Computational Method] We constructed a 9-atom cluster consisting of the central RE ion and the 8 oxygen ions with Oh symmetry (cubic) and 2.4 Å bond length. We considered the ground state configuration 4fn2p48 and one-electron excitation configuration 4fn+12p47, where n is the number of 4f electrons. In order to improve the computational accuracy, the configuration dependent correction (CDC) was considered. The LMCT energy was calculated as the transition energy from the top of the valence band corresponding to the highest one of the MOs mainly consisting of oxygen 2p orbital to the MO mainly consisting of RE 4f orbital based on the MO calculation using the DV-Xα method and the CI calculation using the DVME method.

[Result] The theoretical LMCT energies calculated with CDC are shown as the diagram in Fig. 1 together with the diagram for the reported values in YPO4 and YAG. The figure shows that the reported trend, especially around Eu to Gd, was successfully reproduced by first-principles calculations. The overestimation for Ho to Tm is probably due to the insufficient consideration of electron correlation. 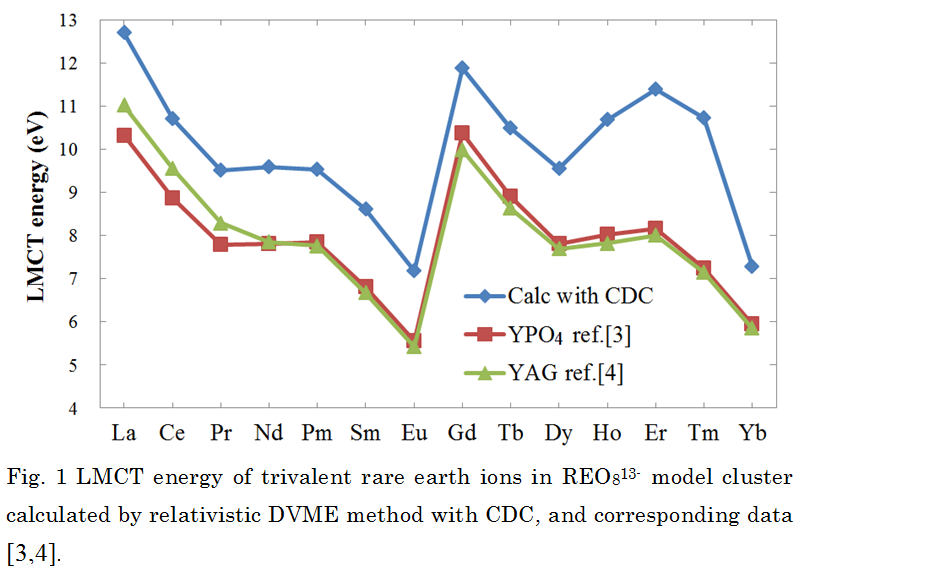