An explosive increasing of renewable energy sources is accelerating the independence of fossil fuel, whereas have brought a challenge to the energy market. Consequently, the development of the system to store large-capacity electric power is now strongly required. Among various technologies for converting electric power to hydrogen, alkaline water electrolysis has a long history in the chemical industry, and is easy to upsize. Therefore, it is the optimal system for combination with large power generations from renewable energies, such as mega solar plants or wind farms. Brushing up the alkaline water electrolysis technology will be able to make the energy market stable.

Alkaline electrolyzer decomposes water to generate H2 and O2 at cathodes and anodes, respectively. The electrolyte is an aqueous solution containing either NaOH or KOH with a typical concentration of 20 – 40 wt% and the operation temperature is between 70 - 90 degrees C. In each cell, a cathode chamber and an anode chamber are separated by diaphragm. Conventional alkaline electrolyzers are mainly operated at low current density (2 kA/m2). This is because of high cell voltage. The cell voltage is calculated according to the following equation.

Where Ecell is cell voltage, Erev is reversible potential (theoretical voltage of water electrolysis), Eov is overvoltage (mainly decided by the reaction rate of electrodes) and Eohm is ohmic loss (mainly caused by the resistance of electrolytes). Therefore, the development for reducing overvoltage and ohmic loss is important for realizing lower electric power consumption system.

Asahi Kasei has already fabricated and started to operate a middle size electrolyzer (0.2 - 0.3 m2/cell) as a demonstrator. The Zero-gap system, the gaps between each cathode and anode are minimized in cells, is adopted in the electrolyzer, and results in reducing the ohmic loss drastically. This enables to operate at 1.0 A/cm2 (around 30,000 A), which is equal to or greater than PEM in efficiency. Cell voltages of the electrolyzer are shown in figure 2. Asahi Kasei electrolyzer is operated less than 1.8 V per cell at 0.6 A/cm2, which is world class performance.

The performance and durability with sources simulated renewable energy are evaluating with the middle size demonstrator. Rapid response to precipitous change of source is already cleared. Continuous running test is also proceeding with various input types, for example, repeated on-off, sine wave current and so on. In order to verify the specification, the test is planning to last over 10,000 hours by the end of 2017.

Furthermore, a commercial size electrolyzer (2-3 m2/cell) has been already fabricated and started to run since the beginning of Nov. 2015. Commercial electrolyzers are designed for 5 MW class, 1,000 Nm3-H2/hr per unit and lower than 5 kW/Nm3-H2 as a system, aiming to receiving orders in 2017.

This work was supported in part by the New Energy and Industrial Technology Development Organization (NEDO) of Japan. 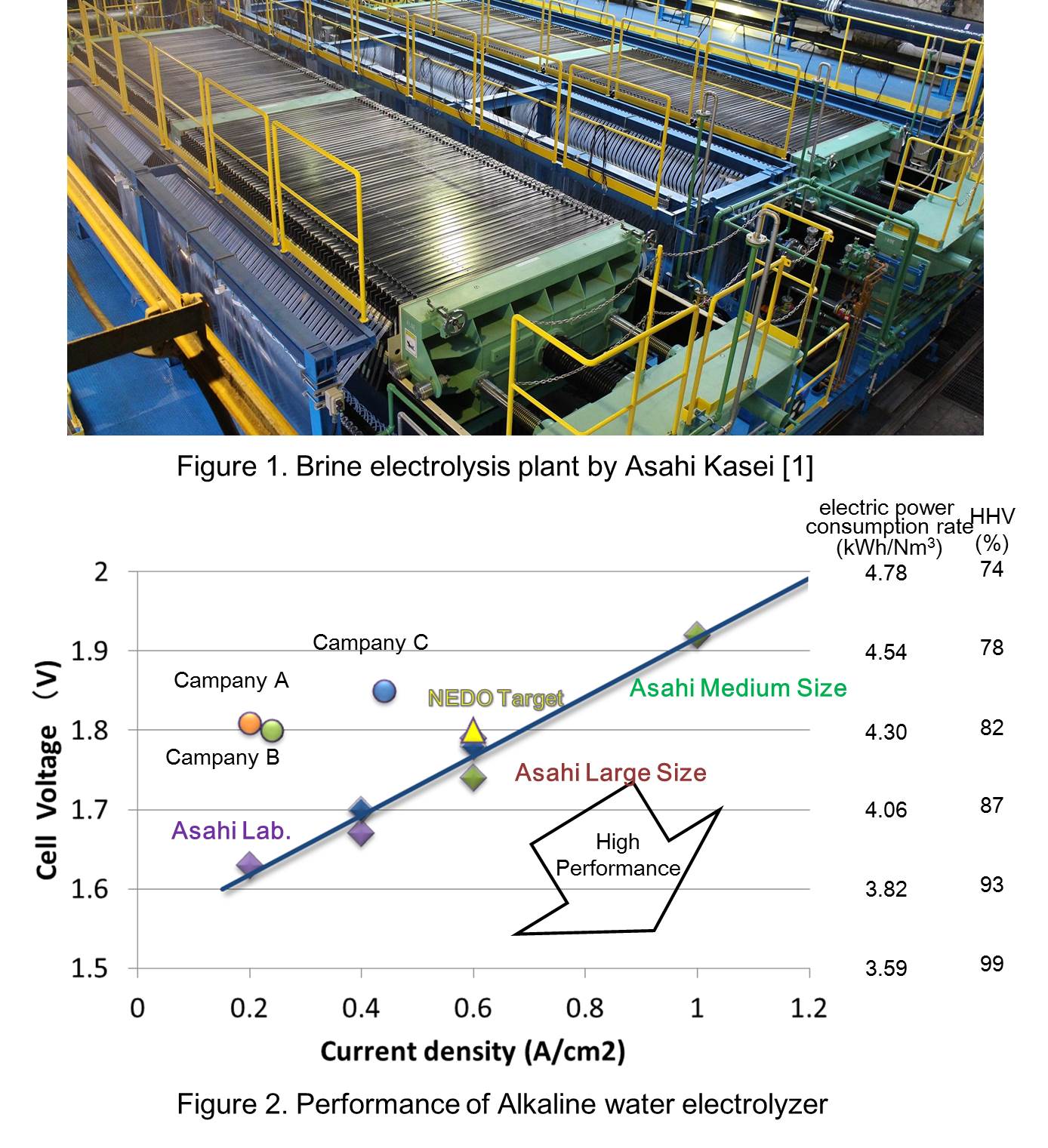