1499
A New Approach for the Synthesis of Composition-Controlled, Fe-Based O2-Reduction Catalysts for Polymer Electrolyte Fuel Cells

Maryland C (Gaylord National Resort and Convention Center)
J. Herranz, K. Ebner (Electrochemistry Laboratory, Paul Scherrer Institut), and T. J. Schmidt (Laboratory of Physical Chemistry, ETH Zürich, Paul Scherrer Institute)
The excessive cost of polymer electrolyte fuel cells (PEFCs) would be significantly reduced if the Pt-based catalysts needed to catalyze the oxygen reduction reaction (ORR) at the cell’s cathode were substituted with inexpensive materials based on abundant metals.1 Such non-noble metal catalysts (NNMCs) have been studied since the 1960s and, in recent years, a refinement of their syntheses has led to initial ORR‑activities commensurate with those observed for Pt-based catalysts.2,3 However, this outstanding performance is accompanied by a fast deactivation that remains poorly understood,4 and that is likely related to the NNMC’s composition. For Fe-based catalysts, the latter typically consists of Fe-N4 like moieties that are believed to be responsible for the material’s ORR-activity, along with side phases (e.g., Fe-oxides, carbides and/or nitrides) that do not participate in the catalytic process.5 NNMC deactivation could in terms be caused by the demetallation of the ORR-active Fe-N4 sites, and/or be related to the inactive side-phases, which could catalyze the formation of the aggressive Fenton’s reagent or get leached and poison the cathode’s proton-exchange ionomer.4

To clarify the contribution of these composition-related mechanisms to the overall catalyst deactivation, NNMC synthesis approaches allowing a fine composition control are urgently needed. With this motivation, we have developed a new NNMC preparation method in which polyacrylonitrile is used as the N- and C-precursor, and an inexpensive, thermally decomposable compound as the porosity-inducing agent. Initially, the precursors’ ratios and the temperature of their heat treatment are systematically modified to yield catalysts with different surface N- and (micro)porous-contents. These features are then shown to be only partially related to the catalysts’ ORR-activity (assessed in rotating disk electrode measurements in 0.1 M HClO4 – cf. Figure 1), which for the best performing materials reaches values of ≈ 1.0 A∙gNNMC−1 at 0.8 V vs. RHE. Additionally, the catalytic performance is related to the relative content of Fe-N4 sites and side phases, which is assessed through transmission electron microscopy and X-ray absorption spectroscopy. To investigate this effect in greater detail, the composition of selected catalysts is further modified by including reducing agents in the catalyst synthesis’ acid washing and / or heat treatment steps, as to favor the removal of Fe-based side-phases.6,7 Ultimately, the performance of selected catalysts with different proportions of active and inactive phases is assessed in PEFC tests which shed light on the impact of their composition on catalytic activity and stability.

In summary, this contribution will introduce a novel NNMC-synthesis approach leading to catalysts with different, well-defined compositions, allowing to draw correlations between this key property and the materials’ catalytic activity and durability in PEFC cathodes.

Figure 1. Relation between mass-normalized ORR-activities at 0.8 V vs. RHE (A), XPS-determined surface N-contents (B) and total / microporous surface areas derived from N2-sorption porosimetry (C), for NNMCs with an initial iron content of 0.1 wt. % Fe and different initial concentrations of the porosity precursor. 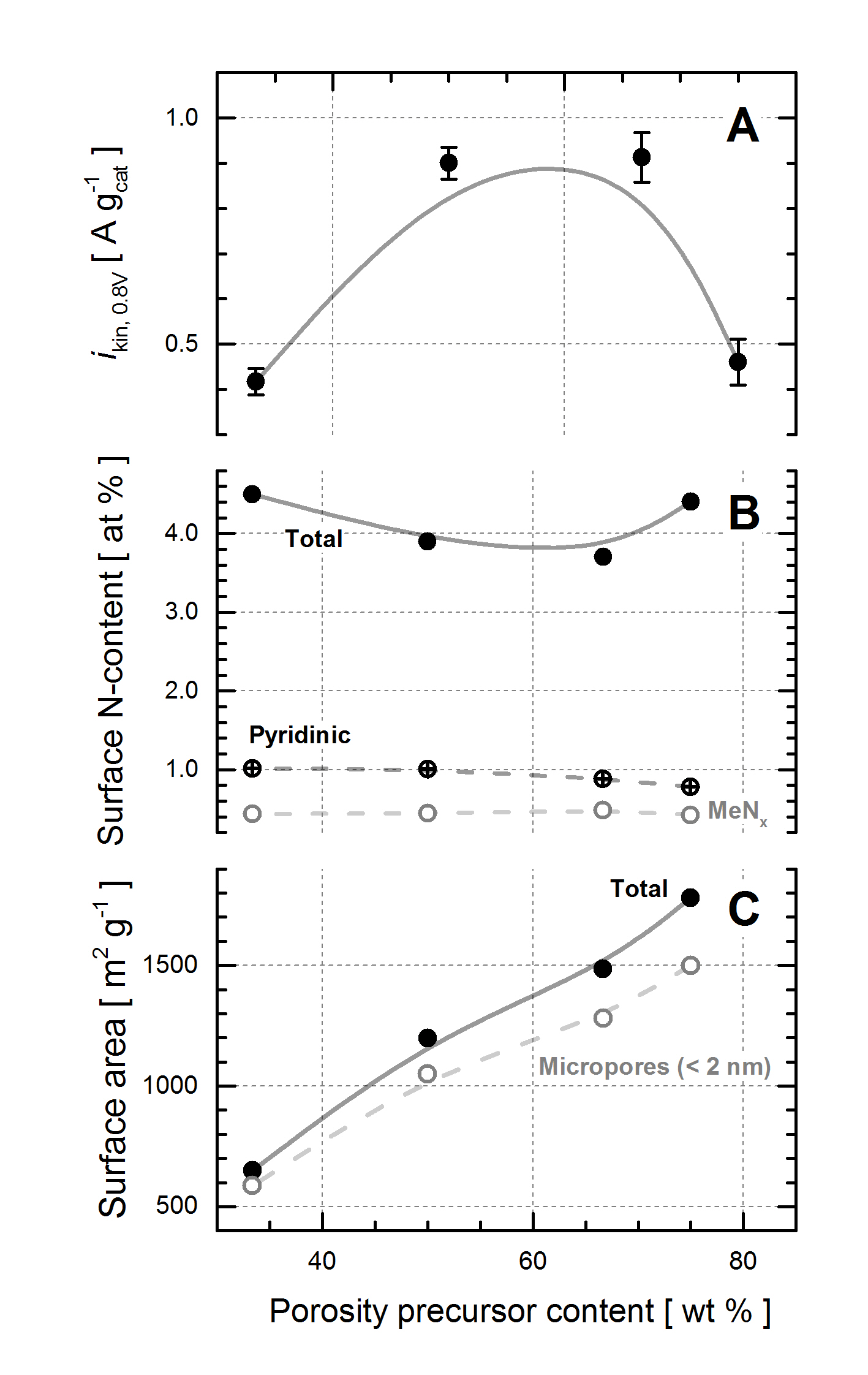