The choice of CNx interlayer was motivated by the higher resistance of the CNx structure as compared to pure C which was determined by a mass-spectrometry analysis of PEMFC exhaust at different cell potentials. Benefits of lower absolute carbon etching rate and at least 0.25 V lower corrosion threshold were found for CNxon both sides of the PEMFC (see Fig. 2 for cathode results).

The anode catalysts with various Pt loadings on all the substrates were tested and compared with a standard state-of-the-art commercial Pt/C reference anode with respect to their efficiency for hydrogen oxidation reaction (HOR; see Fig. 1). Performance up to 1.3 W/cm2 in pure H2 and O2 was achieved for anodes containing Pt loading of 2–10 µg/cm2 on CNx substrate. It is comparable to the performance of a standard commercial Pt/C anode with loadings 200–400 µg/cm2.

The same experiments as for HOR were performed for and oxygen reduction reaction (ORR). In this саsе, cathodes with various Pt loadings were tested. The maximum performance up to 0.54 W/cm2 in pure H2 and O2 was found for cathodes with Pt loadings in the range of 20–100 µg/cm2. The Pt loading of 100 µg/cm2 was found as the limit thickness for the magnetron sputtered thin film, further increase of Pt content leads to efficiency decrease of PEMFC. When PEMFC is switched from H2/O2 to the H2/air, the power is decreased 2.0 to 2.2-times relative to the reference Pt/C powder electrodes and 2.8 to 3.0-times on thin film Pt electrodes.

We have also performed 450-hour durability tests in a pulsed regime of 30min open voltage + 30 min under 400 mA/cm2 load, as well as in the regime of stable 400 mA/cm2load for both anode and cathode sides of the PEMFC with Pt loadings of 2 µg/cm2 and 20 µg/cm2.

Based on our research, the PEMFC with best Pt utilization was found for MEA based on a combination of anode with 2 µg Pt per cm2 and cathode with 10 µg Pt per cm2, yielding the total power density 0.45 W/cm2 for as little as 12 µg/cm2 of total noble metal content. 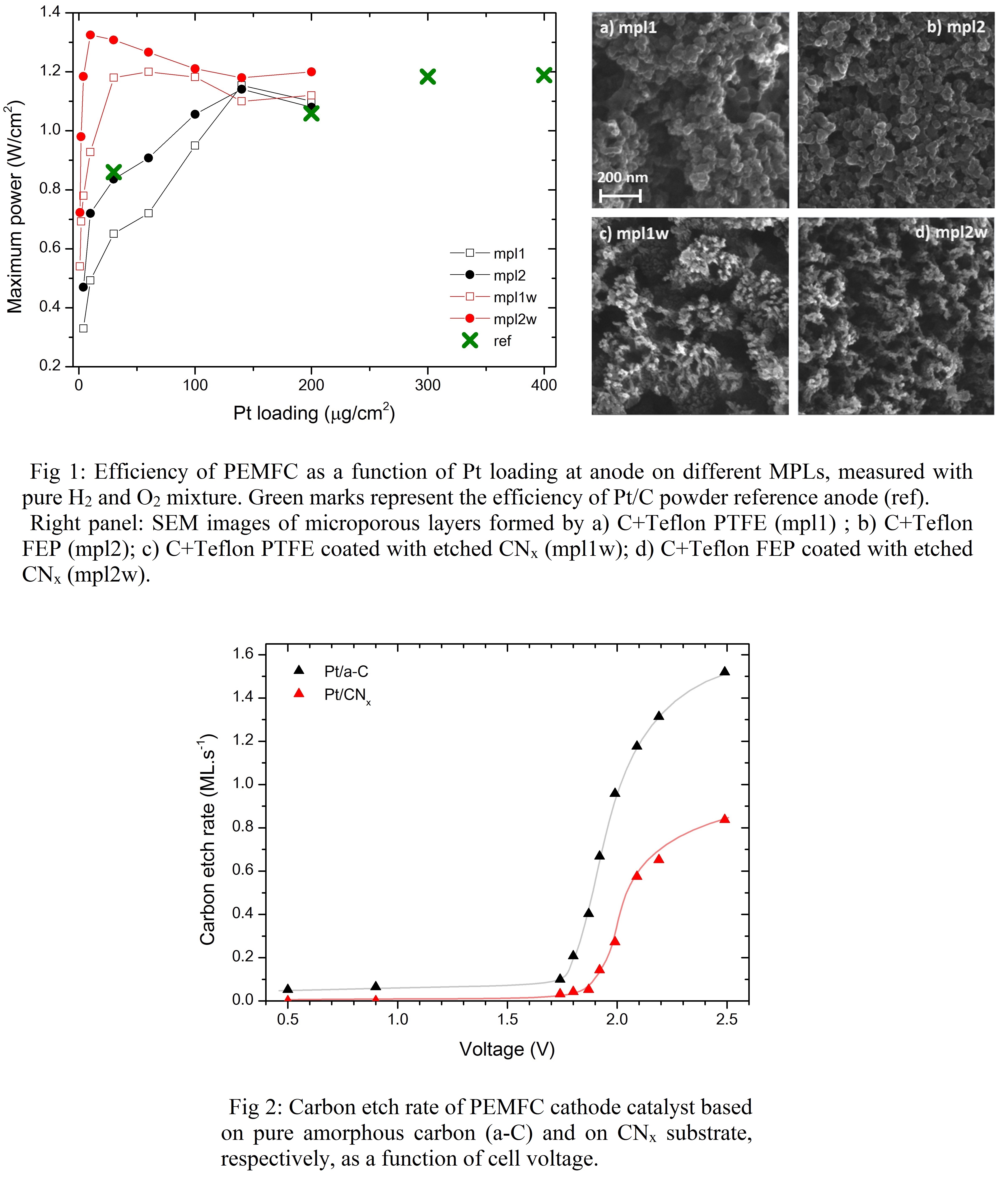