National Harbor 3 (Gaylord National Resort and Convention Center)
S. Sakaida, Y. Tabe, and T. Chikahisa (Hokkaido University)
To improve the performance of a polymer electrolyte fuel cell (PEFC), it is essential to control liquid water behavior in the cell. Gas diffusion layer (GDL) plays an important role for the water transport. As the structure of GDL is quite complex and small with the scale order of 200 mm thickness, measurement of liquid water behavior in the GDL is difficult, and only a few results are reported with X-ray measurement and pore-network simulation. Therefore, the water transport in GDL is still unclear and there may be some room for improving the structure of GDL. The objective of this study is to evaluate the effects of different degree of isotropic fiber directions and uneven hydrophobic and hydrophilic structure of GDL for the water transport. For the analysis enlarged scale model experiment and high-speed Lattice Boltzmann Method (LBM) are applied.

In the previous research of the authors, the effects of the GDL fiber direction on the cell performance was investigated using anisotropic GDL, and the results of the experiments showed that the cells with perpendicular fibers are more tolerant to flooding than cells with fibers parallel to the channel direction (1). The fiber direction is important factor for the water control in the GDL. The fiber direction perpendicular to the channel discharged liquid water under libs more smoothly. Similarly, there is a report which shows that better cell performance was obtained with the GDL with cyclic hydrophobic and hydrophilic lines (2). The fiber direction and wettability of GDL are important factors for the water control in the GDL, but the water behavior in the structures have not been observed and the effect of these factors on water transport is not clear yet.

The authors proposed a scale model experiment with similarity to the actual behavior. In the experiment silicon oil is used for the liquid water and water for air. With this combination of the fluids, buoyancy effects are set similar with the actual system in enlarged models with 300 times of the actual size. Additionally, the authors have developed LBM model with high speed computation to make it possible to simulate the space covering the GDL width and channel. Figure 1 is a result comparing the scale model and LBM simulation. The figure shows the liquid water distribution in GDL. Figure 1 (a) is experimental results with an enlarged scale model and Fig. 1 (b) is simulation result by LBM. The two figures show similar water distribution.

Figure 2 shows two different fiber structures with LBM simulation. Figure 2 (a) is the structure of anisotropic fiber and Fig. 2 (b) is the one of isotropic fiber. The fibers have a diameter of 8μm and orientation is set to give based on electrical resistivity with the actually measured GDLs with different isotropy. Sizes of the each GDL structure is 270μm × 270μm × 200μm and porosities is 75%. Liquid water is introduced from a hole placed at the bottom center of the boundary, which corresponds to MPL boundary. The contact angle of solid wall (GDL fibers, MPL, side wall) is set 130º.

Figure 3 shows the difference in water distributions in two different fiber structures with LBM simulation. Figure 3 (a) shows the result for anisotropic and Fig.3 (b) shows the result for isotropic fiber. The water tends to spread along with fiber direction in the anisotropic GDL, whereas water transports upwards randomly in the isotropic GDL. It is known that water tends to retain in the GDL under ribs and smooth removal of the water is important to avoid flooding. The anisotropic GDL may guide the liquid water toward channel direction from under the rib, when the fiber direction is placed perpendicular to the rib direction. In the final full paper, the water transport characteristics with different fiber orientations and wettability will be demonstrated in detail. 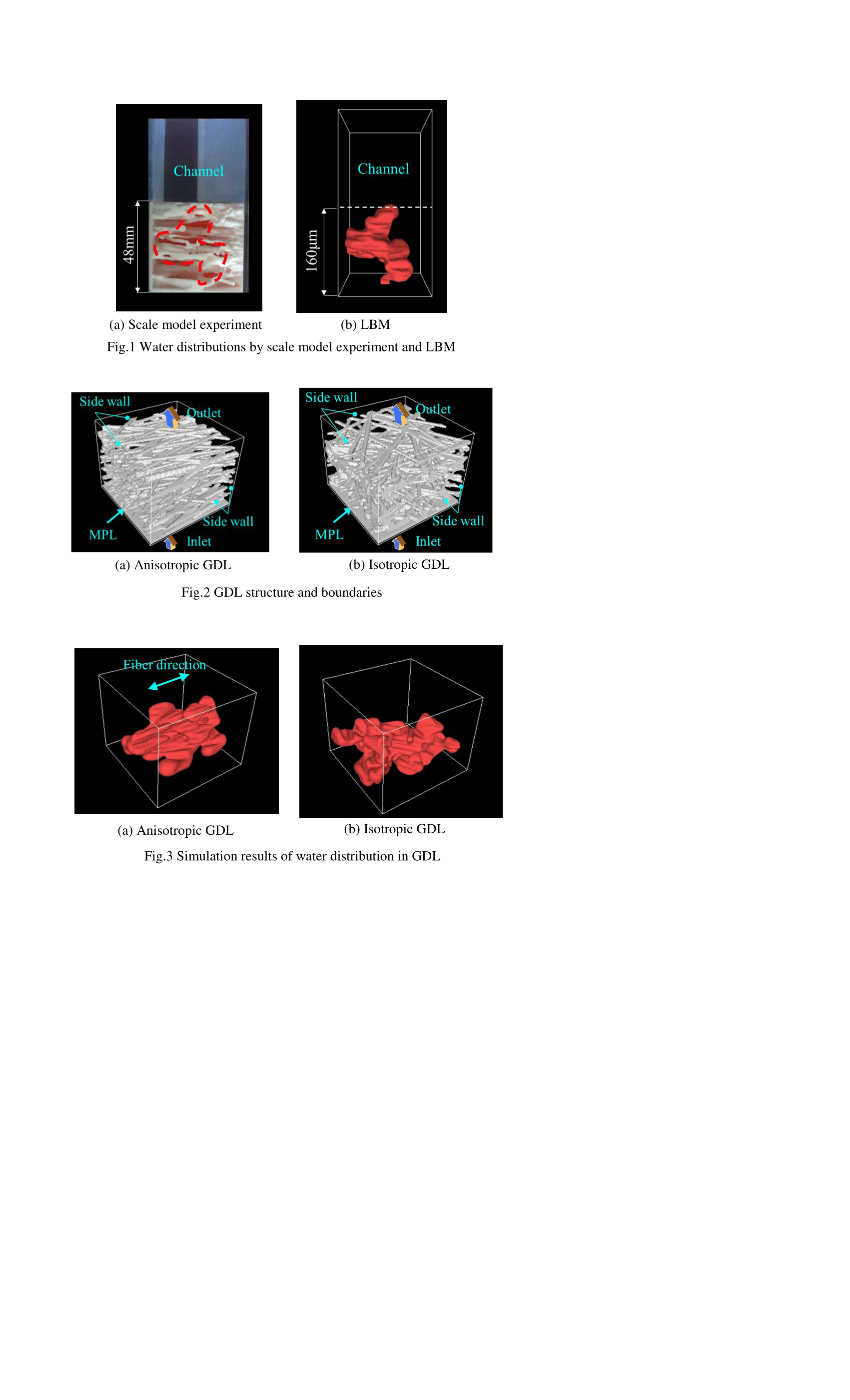