Camellia 2 (Gaylord National Resort and Convention Center)
L. C. Ho, W. W. Tsai, C. B. Lee, Y. H. Hsu, J. F. Wang, and W. Zhou (Electronic Materials, The DOW Chemical Company)
Integrated circuits (IC) are produced by deposition and modification of different dielectric and metal layers on a silicon wafer. Because of the continuing miniaturization of the device dimensions and the requirements of interconnecting an increasing number of devices on a chip, building multilevel interconnections on planarized levels has become an essential part of IC production. Chemical mechanical planarization (CMP) is a process of smoothing the dielectric and metal films in the process of integrated circuit fabrication with the combination of chemical and mechanical forces. For a metal CMP slurry, the key components and steps are as follows: 1. Oxidizing agent is added to the slurry to oxidize the metal surface. 2. Nano-scaled abrasives subsequently remove the dielectric and oxidized metal layer by mechanical force. 3. Inhibitors are added to prevent or minimize undesired corrosion thus controlling the surface quality.

A group of surfactant-like inhibitors have been investigated in this study. Their structures differed by the length of their hydrophobic tails (alkyl groups having 4 to 16 carbon atoms). The molecules were absorbed on metal wafer surface through hydrophilic head and the hydrophobic tail wriggled on top and around. Thus, adjusting the length of tail may change the behavior of the adsorbing layer on metal films, which provided a viable route to interrupt the interactions between slurry components and the metal surface. We found that adjusting the length of tail affected the CMP slurry properties (such as suppression of static etching rate, see Figure 1), longer tail lengths led to better etching inhibition, and also caused distinct modification on the surface of abrasive (mean particle size and zeta potential). Polishing performances including removal rates and topography were also affected by the tail length, but the results with various feature sizes were more complex due to the combined net effect of etching inhibition and modified abrasive properties. The tail length demonstrated an important role on slurry stability and polishing performance.

Figure 1. The decay of etching rates with inhibitors. The indicate-axis tail numbers designate the carbon atoms in hydrophobic tails. 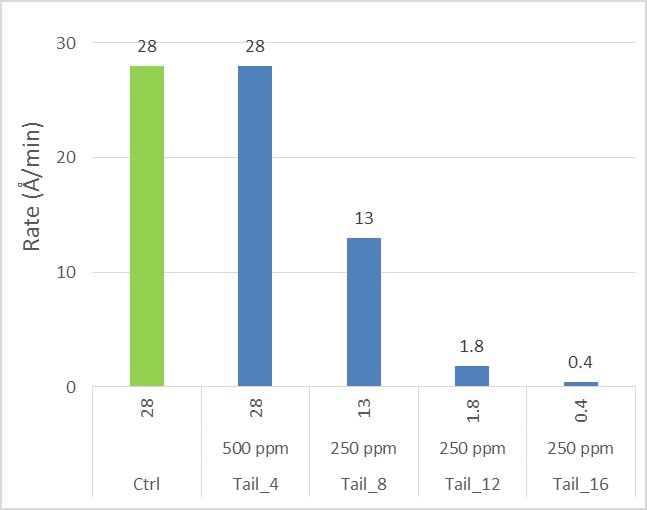