Chesapeake K (Gaylord National Resort and Convention Center)
S. Ivanov, S. Mai, A. Bund, A. Dimitrova, and S. Krischok (Technische Universität Ilmenau)
With specific energies of 400–500 Wh kg-1 Li-Sulphur (Li-S) batteries are promising candidates for energy storage applications. Challenges that still impede their commercialization are the expansion of the cathode during discharge, low conductivity, operational instability due to side reactions and slow Li+ transport [1]. In the presence of Li+, sulphur undergoes a multistep reduction, yielding Li2S as an end product. Practically, however, the highly reactive and soluble sulphur intermediates (polysulfides) inevitably form and start their activity as a redox shuttle or/and participate in side reactions. These processes follow a complicated mechanism, which clarification requires a comprehensive analysis [1-3].

This paper will discuss recent results from the authors' labs on the multi-electron transfer of sulfur as a function of the electrolyte composition. Additionally, we have investigated the influence of cathode binder type (e.g. Polyvinylidene difluoride-PVDF, Carboxymethylcellulose-CMC, Guar gum - GG) on the cycling performance of the cathodes.

To understand the origin of this improvement we characterized the chemical composition of the cycled electrodes by means of XPS. Additionally, the role of small amount 1-butyl-1-methyl-pyrrolidinium bis(trifluoromethylsulfonyl)imide ([BMP][Tf2N]) was also studied. Fig.1C,D compares the Li1s and S2p experimental core level peaks from three different anode samples. Sulphur displays multicomponent spectra, in which Li2S (S2p3/2~160eV), disulfides (S2p3/2~162eV), sulfites (S2p3/2~167eV) and sulfates (S2p3/2~169eV) can be distinguished [4]. Their comparison reveals difference in the composition on the surface and in the bulk of the passivating layer, when lower concentration of Li[Tf2N] was used, independent on the presence of [BMP][Tf2N] (Spectra 1 and 3). The later however, facilitate the overall decrease of sulphur quantity in the bulk (Spectra 3). Contrary, higher Li[Tf2N] concentration shows nearly identical spectral features before and after sputtering (Spectra 2), suggesting homogeneous in-depth elemental distribution in the interfacial layer. We anticipate that the Li1s core level peaks originate from at least three Li-containing species (Fig.1C), which close proximity in the binding energy scale leads to spectral broadening (FWHM ~3eV, Fig1, Li1s-Panel).

By using EPR we studied the paramagnetic species formed at the early lithiation stage, where typically just long chain polysulfide anions are present. Our studies demonstrate generation of at least one sulphur-centered radical, which suggests that disproportionation accompany the sulfur lithiation reaction [6]. We will discuss the quantity, the life-time and the coordination geometry of the detected radicals. 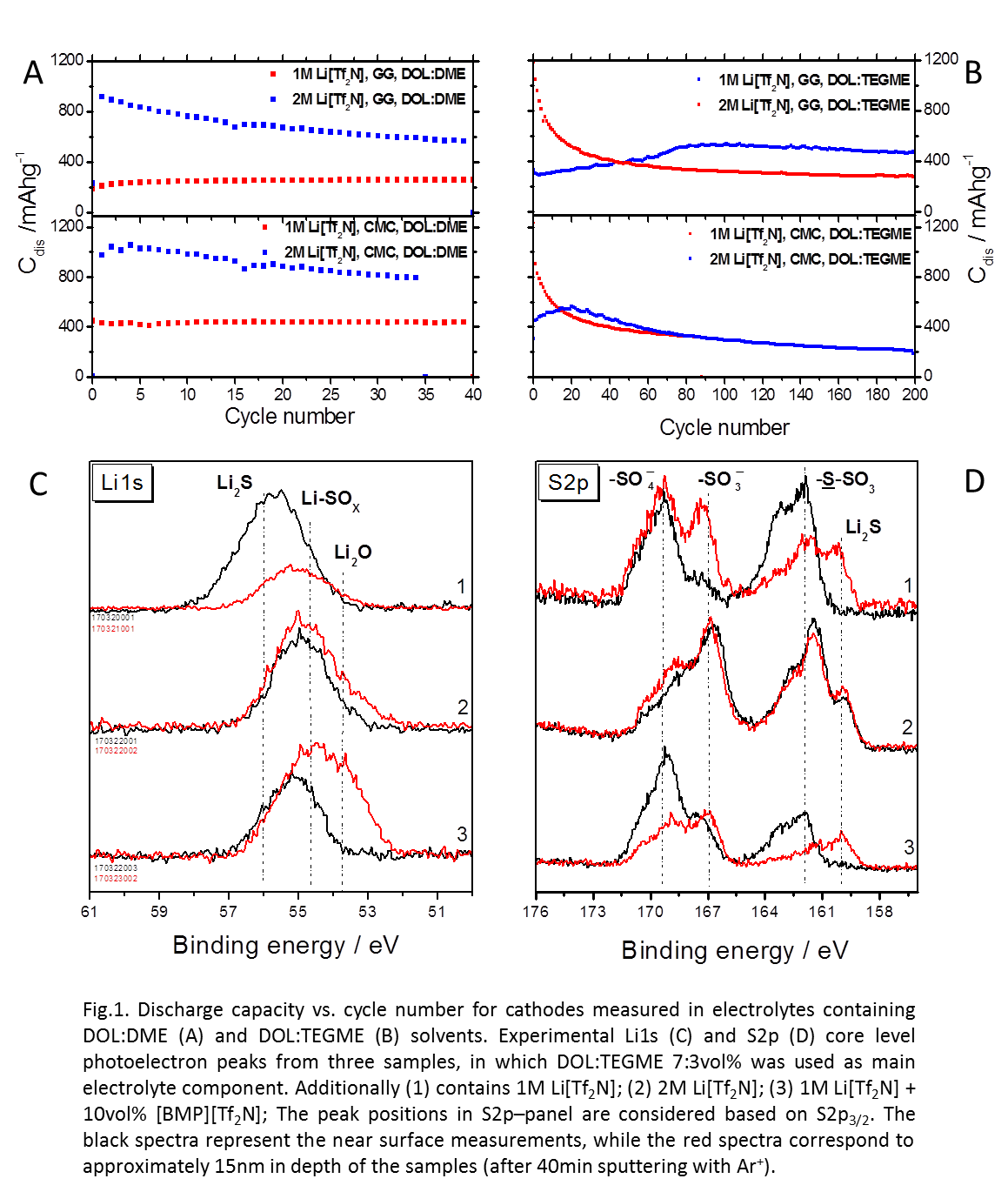