Camellia 2 (Gaylord National Resort and Convention Center)
M. Echeverría Boan, K. Lau, and S. Permeh (Florida International University)
Recent observations of severe corrosion of post-tensioned tendons in Florida Bridges were associated with segregated grout containing high sulfate ion concentrations (Lau et al, 2013). Generally, the role of sulfates for steel initiation in alkaline environments have not been well elucidated. In 1970, Gouda identified steel corrosion initiation in saturated calcium hydroxide solutions (pH=12.1) with sulfate concentrations greater than 0.2%; however, steel depassivation was not observed in concrete samples with sodium sulfate concentrations as high as 8%. Dehwah et al. 2002 reported that sulfates did not affect the time to chloride-induced corrosion initiation, but the corrosion rate increased with sulfate content. Research by Carsana and Bertolini in 2011 indicated a strong influence of solution pH on the anodic behavior of steel in sulfate solutions.

The objective of the work presented here was to identify the role of early presence of sulfate ions on steel corrosion development. The experiments consisted of anodic polarization tests to determine the anodic behavior of steel samples exposed to alkaine solutions with pH 12.6 or 13.3. Those solutions contained sodium sulfate in the range of 0 to 20,000 ppm. The steel samples were preconditioned for 1 day at either the OCP condition or -1VSCE. The intent to pre-condition the sample at OCP was to initially allow any possible passive film growth to occur. The intent to cathodically pre-condition the steel sample at -1VSCE was to maintain the steel at a low corrosion rate but remaining at active corrosion condition prior to polarization. It this way, it was thought any adverse role of sulfate ions to impede stable passive film formation could be identified. Anodic polarization measurements were made initially from -1 VSCE to +500 mVSCE, with a slow scan rate (0.05 mV/s).

Experimental results concluded that anodic polarization tests of steel in pH 13 solution with up to admixed 20,000 ppm sodium sulfate did not indicate strong tendency of sulfates to disrupt passive film formation. However, anodic polarization tests in pH 12.6 and admixed >4,000 ppm sulfate solution indicated instability of passive film resulting in pitting corrosion. It was observed that pH and admixed sulfate concentration will affect the stability of the passive layer. In some cases, as shown in Figure 1, anodic current excursions were indicative of localized depassivation. Indeed, some samples showed indications of pit development. This can be in part explained by the mechanism presented by Gavele (1976) where repassivation of pits can occur in the presence of increased sulfate concentrations within pits but may subsequently diffuse out leading to activation/passivation events. This change of a critical passivation sulfate concentration may result in the observed quick shifts in anodic current. More prominently however, the polarization graphs show transition from passive to active corrosion behavior of steel in solution with the admixed presence of 12,000 to 20,000 ppm sodium sulfate with anodic Tafel slope on the order of ~100 mV/dec. 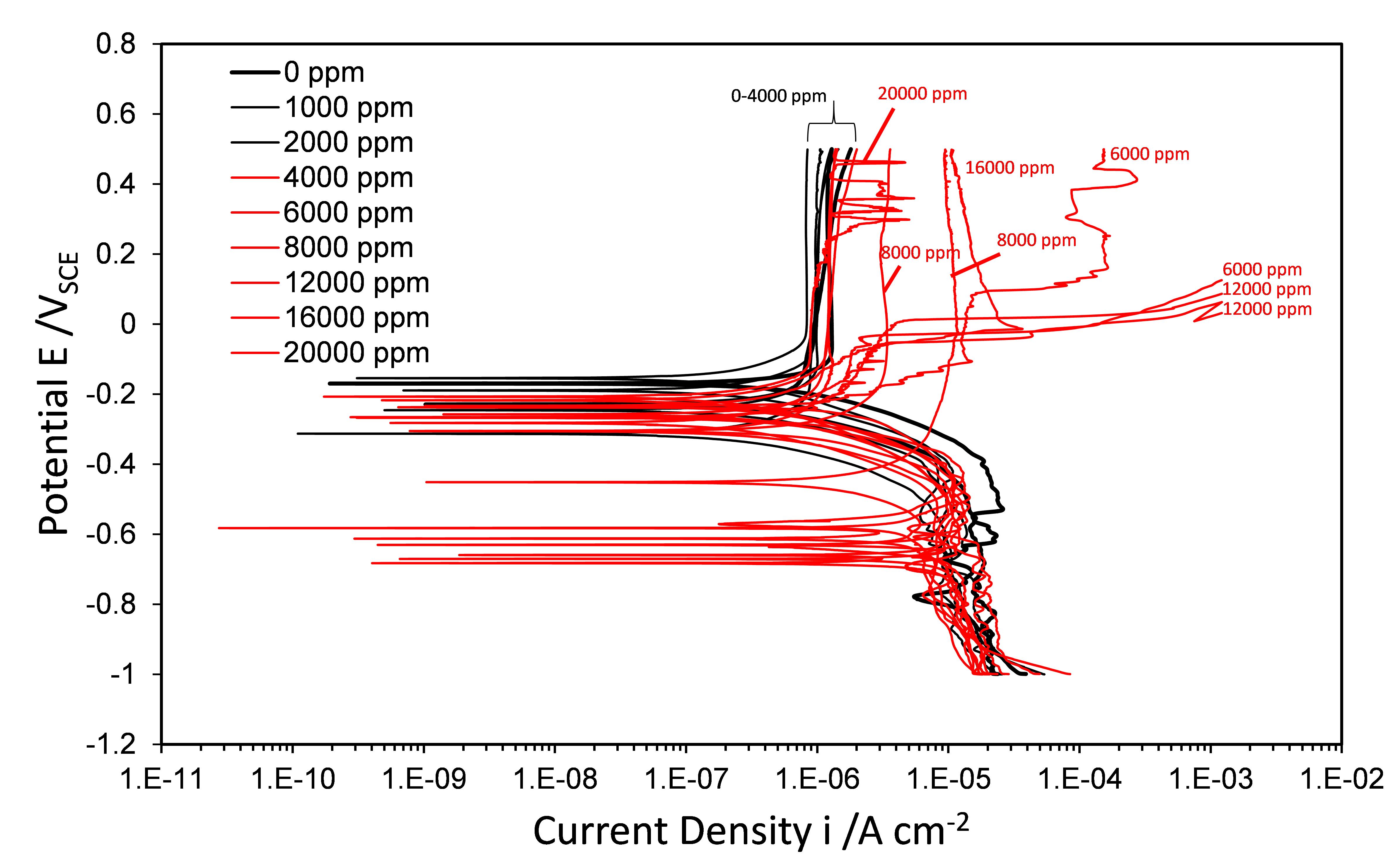