National Harbor 3 (Gaylord National Resort and Convention Center)
A. Bonakdarpour, J. T. H. Kwan, B. A. Pinaud, L. Daniel, G. Afonso, and D. P. Wilkinson (University of British Columbia)
Common methods of fuel cell electrocatalyst characterization, in particular the oxygen reduction reaction (ORR) catalysts, include thin-film RDE and PEMFC measurements using fuel cell test stations. The former is generally available in many electroanalytical labs, however, ink deposition on RDE tips and limited solubility of oxygen in the electrolyte lead to testing environments which are quite different from those of fuel cell hardwares. The latter option requires fuel cell hardware and an appropriate test station which are expensive and not widely accessible by many labs. We present two approaches in order to bridge the gap between these methods: 1) a modified RDE tip which accepts catalyst-coated membranes (CCMs), thus eliminating the potential issues of catalyst ink deposition and the associated variabilities, and 2) a low-cost half-cell setup which allows fuel cell-like current densities (~ 1 A cm-2) to be obtained using gaseous oxygen feed. The novel RDE tip has been tested with Pt foil and commercial CCMs in 0.1 M HClO4 at room temperature (20°C) and good agreements with polycrystalline Pt and H2/O2 fuel measurements have been obtained, respectively. In addition, CCM degradation tests, using an accelerated degradation test protocol (ADT) with potential cycling, have been performed and the loss of Pt and Pt surface area have been quantified. With the half-cell setup, constant current polarizations with IR drop measurement at each step were found to provide a simple, reproducible method of measuring catalyst performance using an optimal electrolyte concentration of 1.0 M HClO4. Accurate ORR activity of commercial GDEs/CCMs and good agreement with measurements made in fuel cell hardware have been obtained with the half-cell setup. Both of these approaches are low cost (< $1000 USD) and can be implemented in a typical electroanalytical lab. Cells designs and results of ORR experiments with both approaches will be presented. 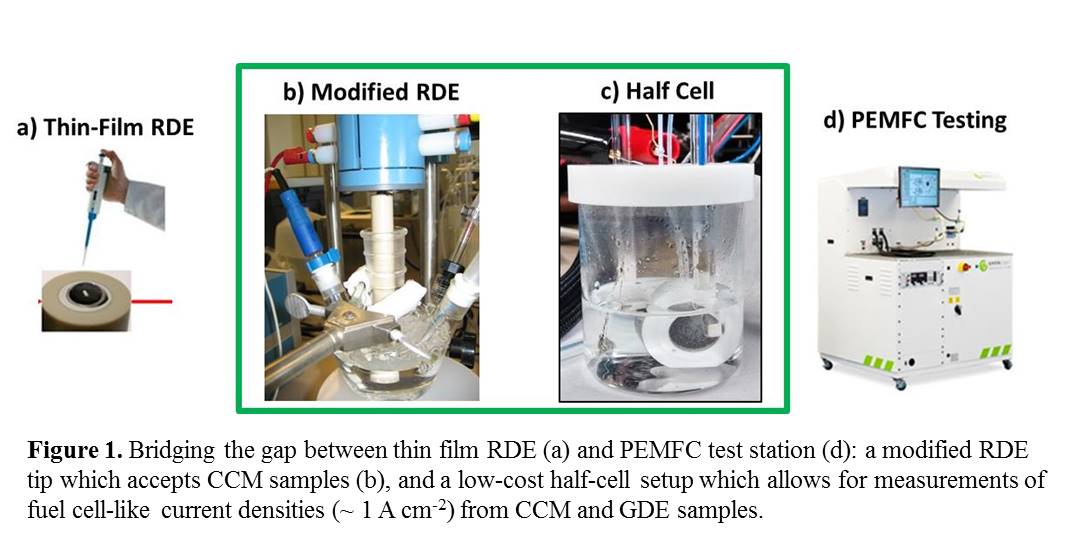