Even though the catalyst has experienced extensive oxidative treatment during the catalyst synthesis and break-in procedure, the dissolution process continues under fuel cell operating conditions due to exposure to an acidic environment and high electrode potentials. This results in the transition metal of the platinum alloy dissolving into the electrolyte phase. In turn, this causes losses in catalytic activity and subsequent reductions in proton, water and O2transport properties of the fuel cell electrodes. Due to these durability issues, high activity at Beginning of Life (BOL) can be compromised during operation.

This talk will outline the quantitative understanding of the Pt and Co dissolution of PtCo electrodes under both simulated and actual fuel cell operating conditions. Studies were performed to quantify the amount of leached Co and Pt ions during potentiostatic (Figure 1) and potentiodynamic (Figure 2) conditions in an electrochemical cell with aqueous acid electrolyte. The amount of metal ions released into the solution were monitored with on-line ICP-MS in a flow-through an electrochemical cell and using ICP on the solution samples that were extracted during the cycling. While the amount of Pt dissolved during voltage cycling has been well studied, the impact of potential cycling on Co leaching is not well understood. Initial measurements show that the amount of Co leached is a strong function of upper potential limit (UPL) and less impacted by the lower potential limits (LPL) (Figure 2), however Pt dissolved is a strong function of both UPL and LPL. In addition to quantifying leached Pt and Co, changes in the particle characteristics and metal compositions of the particles were also quantified using SAXS3and STEM analysis. Voltage cycling was also performed in an MEA environment with DOE protocol recommended for catalyst stability. Changes in activity and performance during cycling was tracked, and post-mortem analysis of the cycled samples was performed to determine changes in particle characteristics.

Fundamental models were developed to explain the mechanisms of the degradation process under potential cycling. Models show that the dissolution process is strongly related to the type and growth of Pt oxides4on the catalysts. The dissolution rates are correlated to activity changes during the fuel cell operation. Using the rate parameters determined from ex-situ dissolution studies, degradation rates in an MEA that underwent DOE voltage cycling can be estimated.

This work was partially supported by the U.S. Department of Energy, Office of Energy Efficiency and Renewable Energy under grant DE-EE0007271. This research used resources of the Advanced Photon Source (beamline 9ID) at Argonne National Laboratory under Contract No. DE-AC02-06CH11357. 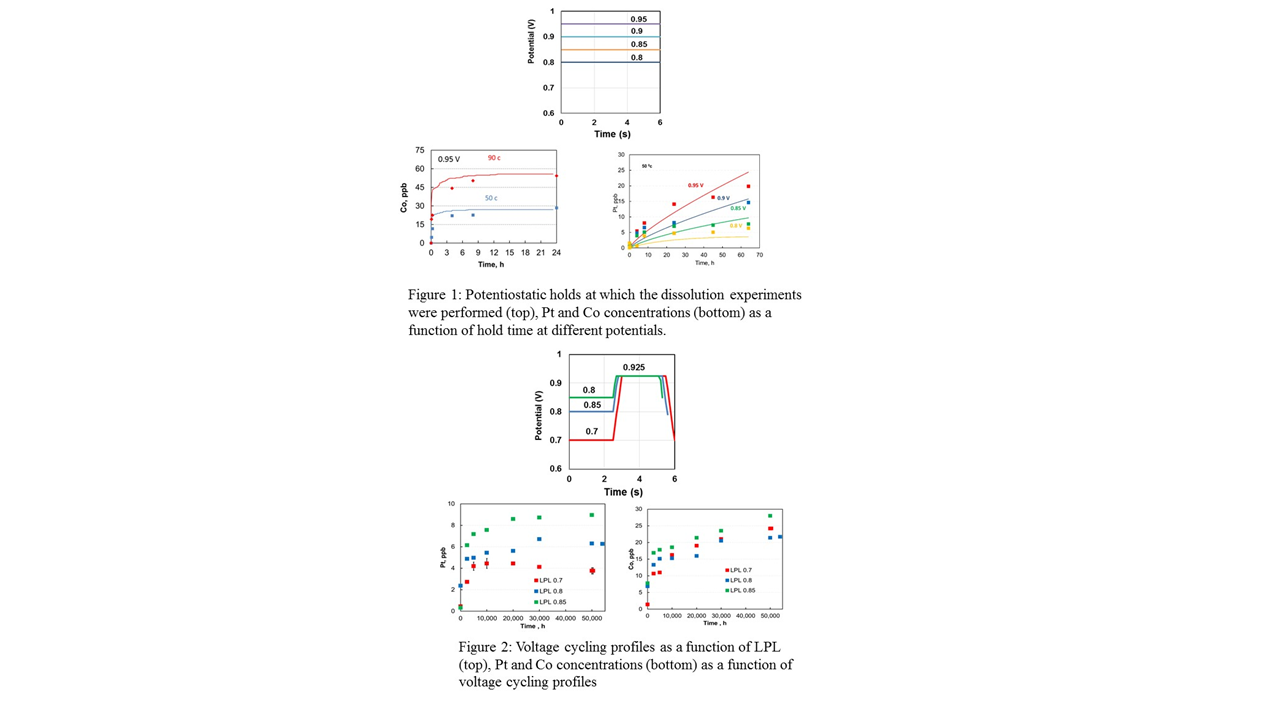