National Harbor 3 (Gaylord National Resort and Convention Center)
P. A. García-Salaberri (Universidad Carlos III de Madrid), J. T. Gostick (University of Waterloo), I. V. Zenyuk (Tufts University), G. Hwang (Wichita State University), M. Vera (University Carlos III of Madrid), and A. Z. Weber (Lawrence Berkeley National Laboratory)
As a complement to experimentation, numerical modeling is a key tool to optimize the design of Polymer Electrolyte Fuel Cells (PEFCs). Moreover, it plays an important role for the study of multiphysics, multiphase and multiscale phenomena, which are difficult to explore experimentally due to the small characteristic dimensions of the Membrane Electrode Assembly (MEA). In particular, thorough understanding of the coupled mass, charge and heat transport processes that occur in thin, heterogeneous, anisotropic, mix-wettability Gas Diffusion Layers (GDLs) is essential to develop new MEA designs with improved performance and enlarged durability [1,2]. In the PEFC literature, the most extended approach to model GDLs is volume averaging, where effective properties are used to describe the multiple transport processes that take place in this component. However, the applicability of volume-averaged formulations when modeling thin GDL materials has been questioned many times, and the error introduced in the numerical predictions is unclear.

In this work, we explore the limitations introduced by volume-averaged formulations of GDLs under single-phase conditions. To this end, Lattice Boltzmann (LB) simulations were performed on X-ray computed tomography images of various commercial GDLs to assess the existence of a Representative Elementary Volume (REV). The tomographic images of the dry GDLs were acquired at Lawrence Berkeley National Lab’s Advanced Light Source (ALS) synchrotron (Beamline 8.3.2) with a resolution of 1.3 µm/voxel, and then segmented into void and solid phases using the algorithms described in [1,3]; the model was implemented in the open-source LB solver Palabos. Relevant effective transport properties were determined in both the in- and through-plane directions by direct numerical simulation, including effective diffusivity, permeability and effective electrical/thermal conductivity. Figure 1(a) shows the results computed for the through-plane effective diffusivity and thermal conductivity on an untreated Toray® TGP-H-120 sample using boxes of material with different size in the x, y, z directions (Lx, Ly, Lz); the center of the boxes was always taken in the middle position of the original GDL sample. The in-plane size to obtain representative and consistent effective properties was found to be around 1 mm, in agreement with the microstructural analysis reported by Zenyuk et al. [3]. This length scale is comparable to the rib/channel width used in PEFCs, which is typically around 1 mm. Regarding the through-plane direction, there is not a representative size much smaller than the thickness of the material. Numerical results are only similar to previous experimental data when the full thickness (or almost the full thickness) of the material is considered. Therefore, it can be concluded that a REV cannot be rigorously defined in a GDL. In other words, there is not a piece of material with representative properties, whose dimensions are much smaller than the characteristic size of the cell in any direction.

Given the impossibility to define a REV in GDLs, the error introduced by volume-averaged formulations was then evaluated by using a non-isothermal, single-phase, steady-state model of a 2x1 mm2 differential PEFC implemented in ANSYS® Fluent. In particular, we compared the predictions of a fully volume-averaged model with those of a pore-scale model accounting for the GDL microstructure. Only the core region of the GDL was included, and a macroscopic description was considered for the remaining components of the MEA (catalyst layers, microporous layers and membrane). The operating conditions were established at 80 ○C, 50% relative humidity, 1.5 bar and 0.5 V. As shown in Figure 1(b), the average results predicted by both models are similar, even though the spatial distributions differ significantly. The impact of the GDL microstructure on the current density distribution arises from the lack of separation of scales discussed above. The preliminary results show that GDL volume-averaged models are a good approximation to determine overall cell performance, as it has been traditionally assumed in the literature. This holds, at least, when the effect of interfacial regions is not considered. However, the local distributions predicted by volume-averaged models can be quite different from the actual scenario at the pore-scale level, in which heterogeneities can lead, e.g., to the formation of hotspots that may affect MEA durability. Further implications of the use of GDL volume-averaged models under multiphase conditions should also be investigated in future work. 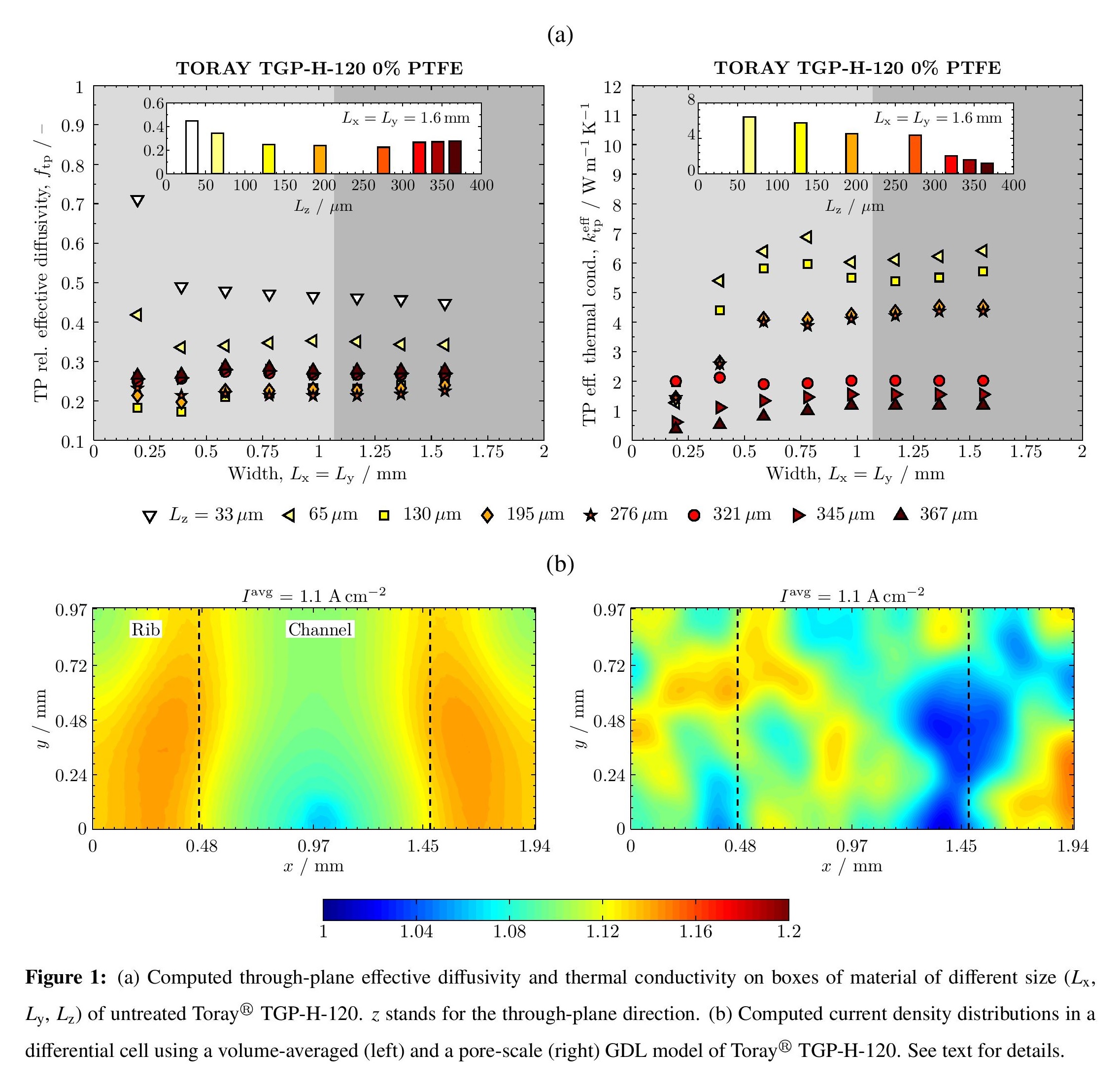