National Harbor 15 (Gaylord National Resort and Convention Center)
Y. Zhai (University of Hawaii - Manoa), J. Ge (Changchun Institute of Applied Chemistry), and J. St-Pierre (University of Hawaii - Manoa)
Electrochemical impedance spectroscopy (EIS) is a useful, in-situ, minimally invasive tool to diagnose reactions. A small sinusoidal AC signal perturbation in current or voltage is applied to the electrochemical charging or discharging (DC current) processes and the response signal is collected for impedance/phase gain analysis. Reaction kinetics and reactant transport have different characteristic time constants, and are evaluated by separating impedance spectra into frequency ranges representative of electrochemical processes that are simulated by electrical circuit elements such as capacitors and resistors (1). The co-adsorption of other electrochemically active species present in reactant streams affect the impedance responses of the main electrochemical reaction. The coverage resistance, the change in reaction rate induced by the modification in other species coverage, is either positive or negative and depends on the co-reactant reaction.

In this contribution, impedance responses of a H2/air fuel cell with propene (as a model co-reactant) in the cathode are investigated to evaluate the effect of co-adsorbates redox behavior. The EIS is simulated by an equivalent circuit model (ECM) that takes into account the co-adsorbing intermediate. Cells were operated under 80 °C, 2 stoichiometry, and 50/100 % relative humidity and 48.3/48.3 kPag for the cathode/anode. The current density was varied to ensure that propene undergoes an oxidation or a reduction at the steady state (fixed cathode potential). AC impedance data from 0.1 Hz to 10 kHz (10 points per decade) were obtained using a Solartron SI1260 Impedance/Gain-Phase Analyzer and Stanford Research SR560 Low Noise Preamplifiers with ZPlot® (Scribner Associates) software. An AC current perturbation of 0.75 A, resulting in a voltage change of approximately 5-10 mV, was applied to the single cell for different current densities. The load bank cables on the positive and negative sides were equal in length and twisted to reduce system inductance and improve accuracy.

Figure 1 shows EIS examples for the impedance responses of fuel cell reactions without or with a trace of propene in the cathode stream. EIS spectra include the impacts of propene oxidation at a low current density (i.e. 0.2 A cm-2) and reduction at a high current density (1.6 A cm-2) on the oxygen reduction reactions (ORR). The adsorption of propene decreases the number of active Pt surface sites and competes with the ORR, resulting in a significant increase in charge transfer (~10 Hz to ~1 kHz) and mass transfer (<10 Hz) resistances. At low current densities and correspondingly high cathode potentials, the adsorbed propene is oxidized and desorbed. Furthermore, propene adsorption and reactions show an increase in both capacitive loops and the appearance of a new capacitive loop at 1.2 A cm-2. For a high current density and correspondingly low cathode potential, the adsorbed propene is reduced and desorbed. Also, propene adsorption and reactions display an additional inductive loop at low frequencies. It is emphasized that the co-reactant effect is inexistent or masked (0.2 A cm-2), leads to a differentiated behavior with the appearance of a new capacitive loop (1.2 A cm-2) or overlaps other processes but is discernible with the extension of the capacitive loop into an inductive loop (1.6 A cm-2).

The present work is applicable to the contamination of proton exchange membrane fuel cells by species contained in the oxidant and fuel streams that adsorb on the catalyst surface and are oxidized or reduced at operating cell voltages (2). The work is also relevant to other electrochemical systems. For a main reaction that is a reduction, a co-reactant reduction leads to an inductive response whereas for a co-reactant oxidation, a capacitive response occurs. The co-reactant impact is reversed for a main reaction that is an oxidation.

The authors are indebted to the United States Department of Energy (award DE-EE0000467) and the Office of Naval Research (award N00014-12-1-0496) for financial support of this project. The authors are also grateful to the Hawaiian Electric Company for their ongoing support of the operations of the Hawaii Sustainable Energy Research Facility.

Figure 1. The EIS of a PEMFC under different current densities with or without 50 ppm propene in cathode. 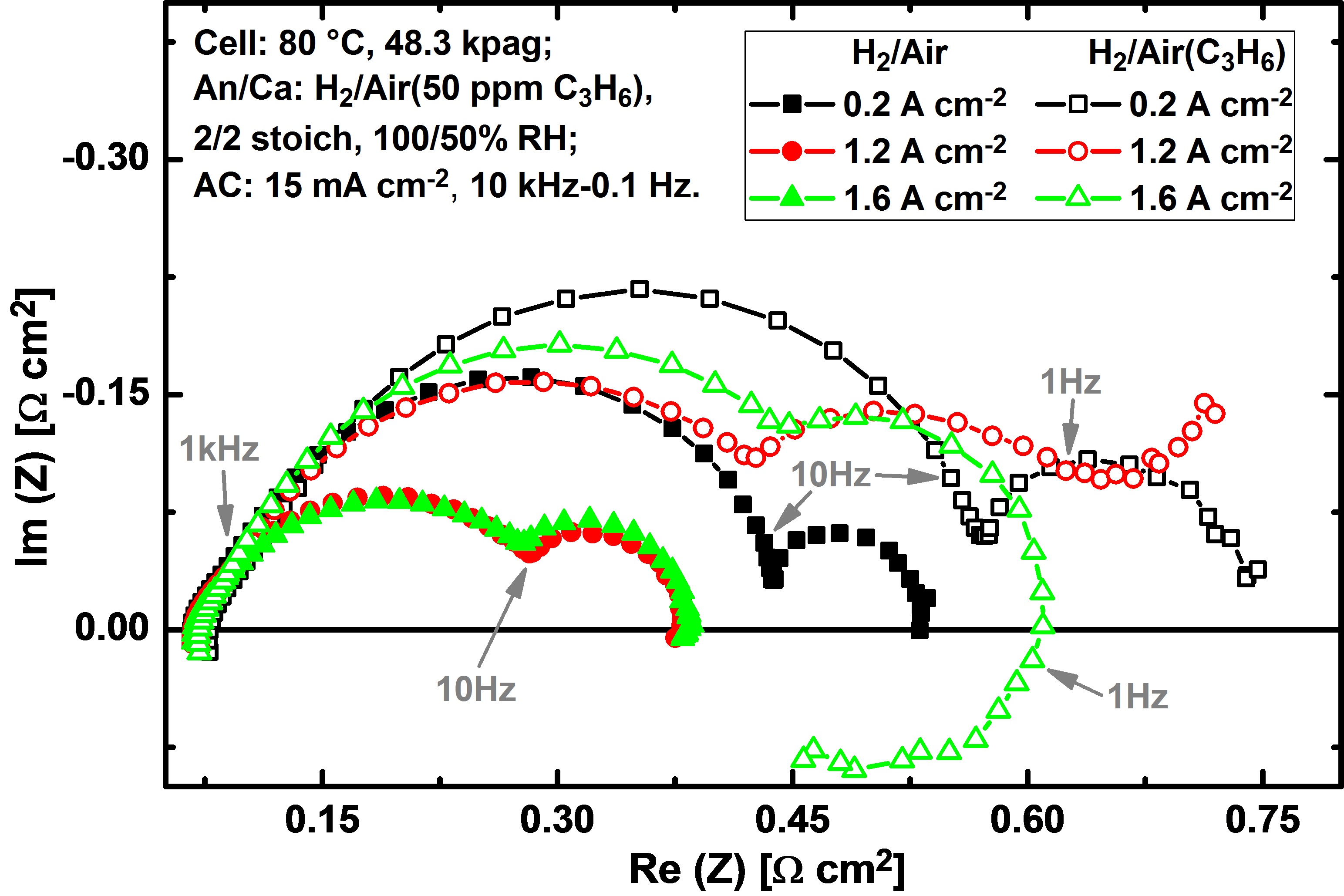