Camellia 3 (Gaylord National Resort and Convention Center)
S. B. Lyon (The University of Manchester), S. Morsch (University of Mannchester), and S. R. Gibbon (AkzoNobel)
The degradation of corrosion-resistant organic coatings continues to present an analytical challenge to corrosion scientists. This is because failures in corrosion protection are localised events, whereas coating analysis is predominately performed using bulk methodologies (e.g., vibrational spectroscopy, thermal analysis). This is compounded by the paucity of non-destructive techniques capable of detecting and characterising localised coating failure in the early stages (i.e., able to pinpoint the appearance of buried pitting sites, de-adhesion processes or blistering). Ex-situ microscopy has conventionally been used to characterise corrosion phenomena beneath organic coatings. However, physical sectioning precludes meaningful chemical analysis of the polymer at failure sites. Emerging non-destructive approaches that allow direct detection of corrosion at the buried interface include: acoustic microscopy, local electrochemical techniques (e.g. scanning Kelvin probe microscopy, the scanning vibrating electrode and local electrochemical impedance measurements) and can be employed to monitor corrosion of a buried substrate in situ. Whilst these can examine buried corrosion phenomena, little or no information is obtained about the overlying coating. Alternative techniques with improved resolution utilise scanning probe microscopy (SPM) methods (e.g. Kelvin probe force microscopy, KPFM) whilst detailed topographic images of the overlying coating may be simultaneously collected. More recently, SPM has been coupled to vibrational spectroscopy and allows direct nanoscale mapping of functional group chemistry. AFM-IR is a particularly versatile approach, whereby sub-diffraction limit detection of infrared absorbance is achieved by monitoring the deflection of an AFM probe in response to photo-thermal expansion of the sample. During AFM-IR measurements, the sample is illuminated by a rapidly pulsed tuneable infrared source, (an optical parametric oscillator, 10 ns pulses at a repetition rate of 1 KHz.) Upon absorbance of the infrared radiation, transient thermal expansion of the sample induces a contact-mode AFM probe to oscillate at its resonant frequency. A plot of the amplitude of oscillations as a function of infrared wavelength yields spectra that closely match conventional transmission-mode FTIR.

Here we examine the degradation of model epoxy-phenolic can coatings on electrolytic chrome-coated steel (ECCS). Substrate materials were mechanically abraded successively to 1200 grit, then polished to 0.25 µm diamond paste to achieve a mirror-like surface finish. Stoichiometric epoxy-phenolic coatings were prepared by adding 1,1,1-tris(4-hydroxyphenyl) ethane to bisphenol-A diglycidyl ether (epoxide equivalent weight 172-176 g mol-1) using tetrabutylphosphonium bromide as catalyst. Coatings were spin-coated onto the substrates at 2000 rpm then cured at 150 °C for 60 min. The final coating thickness was around 7 µm. AFM-IR was performed on a NanoIR2 system (Anasys Instruments).

In order to induce corrosion the polished ECCS samples were contaminated by spraying with a saturated sodium chloride solution in ethanol prior to coating. Corrosion was then initiated by placing a droplet of deionised water on the coating surface for 5 minutes, after which it was dried. Examination of the sample by optical microscopy subsequently revealed isolated patches of underfilm discolouration discernible through the coating (a). However, no corresponding change in the coating morphology was observed in AFM height images (b), and infrared amplitude maps obtained at 1260 cm-1 (c) and 1604 cm-1 (d) also remained featureless, indicating that significant deformation of the coating had not taken place. In contrast, infrared maps gathered at 916 cm-1 (e) and 1800 cm-1(f) showed an enhanced signal at the locus of discolouration.

Preliminary results using AFM-IR mapping has been shown to detect the steel-polymer interface buried beneath an epoxy-phenolic coating. Generated infrared absorbance maps are sensitive to the substrate composition and morphology, opening up a new avenue for the detection of buried corrosion phenomena. Detection of the interface is dependent upon both the wavelength and power of incident infrared illumination. This is a result of the variable penetration depth of the radiation, in turn dependent on the infrared wavelength and laser power employed. Thus, judicious selection of infrared parameters permits the selective probing of the infrared absorbance of the coating alone, or a combination coating heterogeneity and interfacial reflectance. 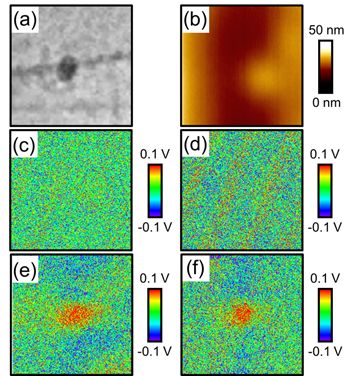