National Harbor 3 (Gaylord National Resort and Convention Center)
G. Inoue (Kyushu University), T. Nakamura, Y. Miyamoto, A. Kimura (Kyoto University), S. Takenaka (Doshisha University), and M. Kawase (Kyoto University)
The improvement of output density and durability of polymer electrolyte fuel cells (PEFCs) is required for the general spread of fuel cell vehicles. However, there is the subject that Pt catalyst particles make agglomerate under high potential and acid condition. It is directly related to the reduction of durability of cell. To solve this subject, silica Pt/C catalyst has been proposed [1]. Porous silica layers which wrap around Pt metal promote the diffusion of oxygen gas to Pt metal surface. The silica layers prevent the diffusion of dissolved Pt cations out of silica layers, which leads to the improvement in the durability of the catalysts. However, this porous silica layer leads to the increase in overall oxygen diffusion resistance. In order to decrease the diffusion resistance, we focused on the proton conductivity of silica layer. We evaluated the effect of amount of ionomer on cell output performance with silica layer. From this result, in the case with silica Pt/C, ionomer can be decreased to increase in output density. It suggested that silica layer has proton conductivity because it is hydrophilic and it can maintain liquid water. Accordingly, we attempted to decrease the overall oxygen transport resistance through silica layer and ionomer by reducing the amount of ionomer since silica layer should contribute to proton conductivity. In addition, we already reported that the heterogeneous ionomer distribution is the dominant factor for the oxygen diffusion resistance through void space of catalyst layer [2, 3]. From this result, we attempted to decrease its resistance by reducing ionomer, too. In this study, silica Pt/C catalyst layers with low ionomer content was prepared by the inkjet method, and the effectiveness was examined by experiment and simulation. Benchmark Pt/C catalysts tends to form agglomerates in the catalyst ink and is thus not suitable for use via inkjet method. However, silica Pt/C catalyst easily disperses without agglomeration and thus the inkjet method is applicable allowing the development of a low ionomer catalyst layer (the weight ratio of ionomer and carbon is 0.25). Figure 1 shows the current density - voltage curve with or without silica/Pt/C. In the case of silica Pt/C catalyst, the power performance increased by reducing ionomer content. The maximum power density increased approximately 1.2 - 1.4 times. Next, the porous structure of catalyst layer was evaluated by TEM and FIB-SEM. Figure 2 shows these images. Compared with conventional coater method, the catalyst layer made by inkjet method has a uniform structure. The porosity of catalyst layer made by coater method and inkjet method were 0.51 and 0.73, respectively. The oxygen transport performance of catalyst layer obtained by inkjet method was higher than that by common coater method. 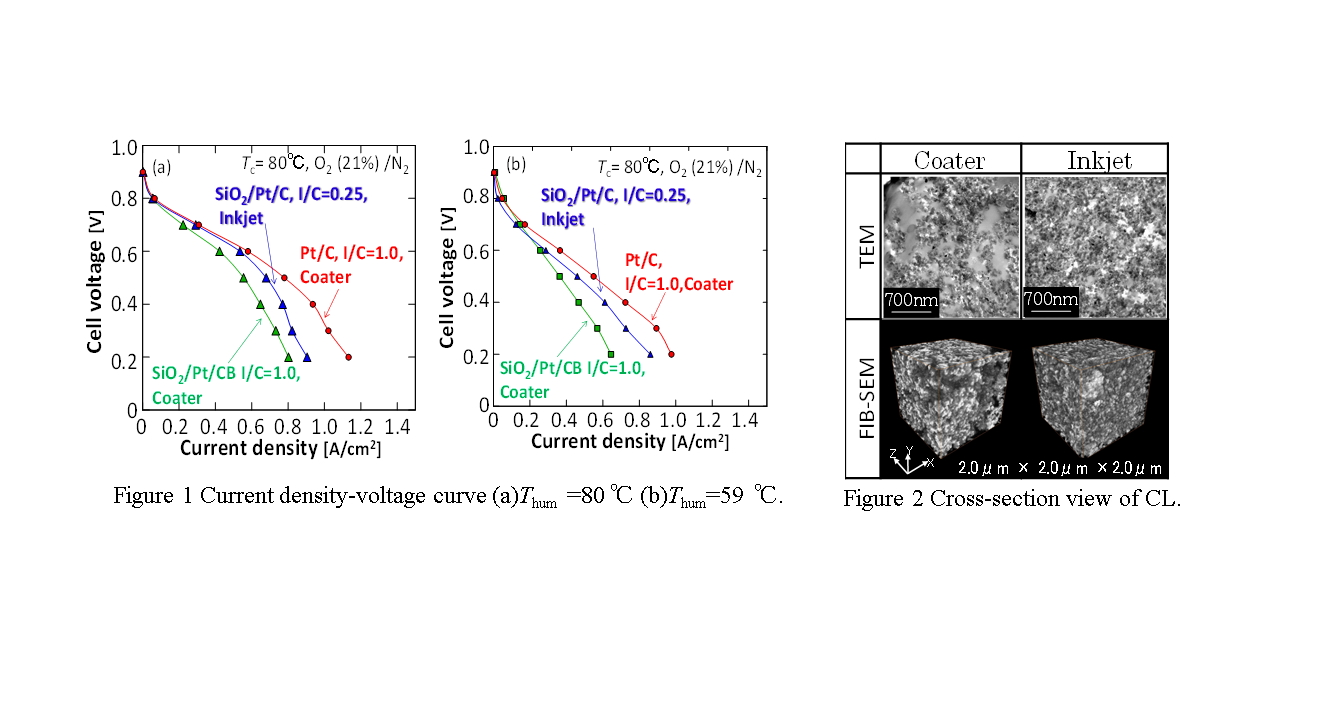