Catalyst ink was prepared by using the mixture of water and NPA as a dispersant. We used platinum catalyst supported on carbon black and Nafion dispersion D2020 (Chemours). Pre-mixing of catalyst ink was performed using ultrasonicaton to break large Pt/C agglomerates into smaller units. As a main mixing process, a high-speed rotary type mixer Filmix (Primix) utilizing shearing force, specialized for producing nanometer slurry was used. The prepared ink was immediately transferred to a glass sample container and sealed tightly. Thereafter, it was placed in the X-ray CT (Shimadzu) immediately and time lapse three-dimensional visualization was performed.

Figure 1 shows sliced image of catalyst ink. The contrast of the image corresponds to the amount of absorption of X-rays, and it is possible to determine the state of the substance. In the black region, X-rays are easy to transmit, which is a light substance. In the initial state, micro to millimeter scale bubbles (several black dots) were dispersed, however, the other part was uniform light gray, which shows that the catalyst ink was homogeneously mixed.

On the other hand, drastic state change inside the catalyst ink with the passage of time was observed. It was found that the volume of bubbles increased with the passage of time. Different color regions (dark gray) were also emerged between the bubbles. Changes with time of the volume of the homogeneous part of the ink, bubbles, and the emerged phase are shown in the graph (Figure 2).

Observed changes in the catalyst ink are thought to be due to alcohol decomposition by the catalyst. For comparison, pseudo catalyst ink using carbon black not carrying platinum was visualized, but no change was observed. Analysis of the gas phase in the upper part of the glass sample container showed that the CO2 concentration was increased. From these results, NPA was decomposed by the platinum catalyst, and it is considered that generation of gas and formation of different liquid components were occurred. These experimental results suggest the importance of management of catalyst ink preparation, storage, and coating processes.

This study is based on the results obtained from a project commissioned by the New Energy and Industrial Technology Development Organization (NEDO). 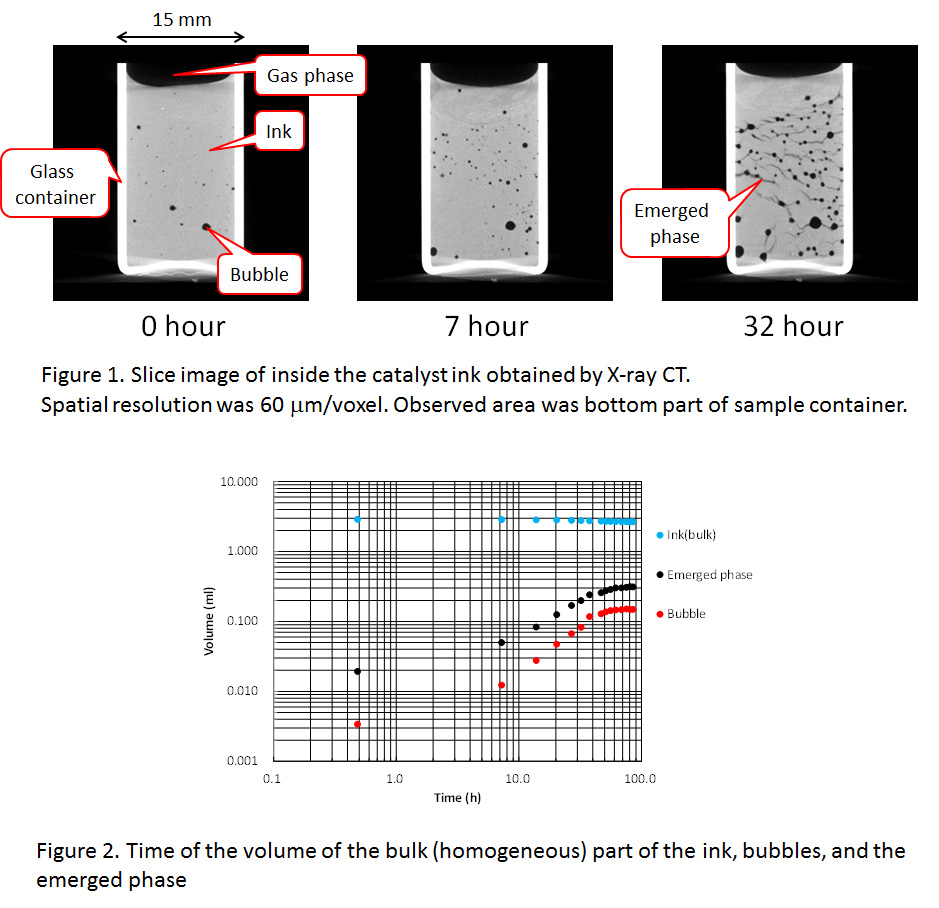