With the recent enhancement of renewable energy utilization, large scale energy conversion and storage become more important to control the surplus electric power due to the unsteady power generation. Reversible hydrogen energy storage system via solid oxide electrolysis cell (SOEC) and solid oxide fuel cell (SOFC) are expected as a high efficient device because of its high operating temperature (600℃~1000℃). It is possible to unify them to one device as reversible system (RSOFC/EC), but it is necessary to understand the mechanism of FC/EC reactions and design the device with a good balance between FC and EC in order to apply them for an actual energy system.

While SOFC reaction models and many electrochemical data of electrodes have been developed and reported by many researchers, there are few reports to investigate the reaction model of SOEC. Thus, it is possible to predict the performance of SOEC based on a comprehensive SOFC/EC models and experimental data of SOFC, because the reactions of SOFC and SOEC are a reversible relationship and the equal value of IR loss can be applied. However, the comprehensive SOFC/EC electrochemical model has not been established. A series of experimental data of anodic and cathodic current density vs. the potential should be investigated at various conditions to develop the SOFC/EC model.

In this work, a series of anodic and cathodic electrode performance was taken using a SOFC in various conditions. Furthermore, attempting to predict SOEC performance from SOFC performances, we proposed and discussed a new model of electrolysis based on our developed SOFC model.

The Disks of 8 mol% Y2O3-ZrO2 (YSZ; 0.25 mm thickness, 20 mm diameter) were used as the electrolyte and the anode was a Ni/YSZ or Ni/GDC composite, and the cathode was a La0.8Sr0.2MnO3/ScSZ composite. We measured the dependence of the current density of anodes on oxygen activity with wide range to get both power generation and electrolysis data for various gas composition (PH2=0.3~0.99 atm, PH2O=0.01, 0.03, 0.05 atm).

1. Method to fit parameters on the SOFC/EC model

We have developed the electrochemical reaction model on the fuel electrode (=anode) based on the equilibrium of competitive adsorption and oxygen activity, ao, specified by anode potential (Eq.1, Table.1) [1].

The SOFC model was constructed by assuming competitive adsorption equilibrium of H2, H2O and O on Ni surfaces at three-phase boundary and the rate-determining step to be Langmuir-type reactions of H with O (Table.1). We obtained an equation of the electrical current density, i, as a function of the oxygen activity (ao) calculated from the anode potential which is simply measured from experiments. To confirm effectiveness of the model, we fitted the model to actual experimental data described by i vs. ao. From the equations of model on Table.1, each current density of SOFC (ia) and SOEC(ic) are described as Eq.2. To draw the plot of i vs. ao on the model, the rate constants (ka, kc) and the equilibrium constants (KO, KH, KH2O) need to be defined as reliable value. Thus, from the equilibrium potential vs. 1 atm O2 (Eq.3), we defined the rate constant of kcas Eq.4.

When the kc became a dependent variable of ka, then we fitted ia to power generation experimental data described by i vs. ao so that the values of KHKO/KH2O were fitted approximately. Finally, ic model could be drawn on the plot of i vs. ao and the maximum value of ic was obtained by Eq.5 which is independent of aoand Eq.6 was obtained using Eq.4.

2. Experimental results and parameter fitting on the SOFC/EC model

The electrolysis current density measured by our RSOFC/EC showed 6 times higher than model values approximately. This result suggested the possibility that additional parallel reaction path was existed. In this presentation, we will discuss the possible electrochemical paths to explain the disagreement between the model and the experimental data.

Table. 1 The SOFC/EC model used in this study 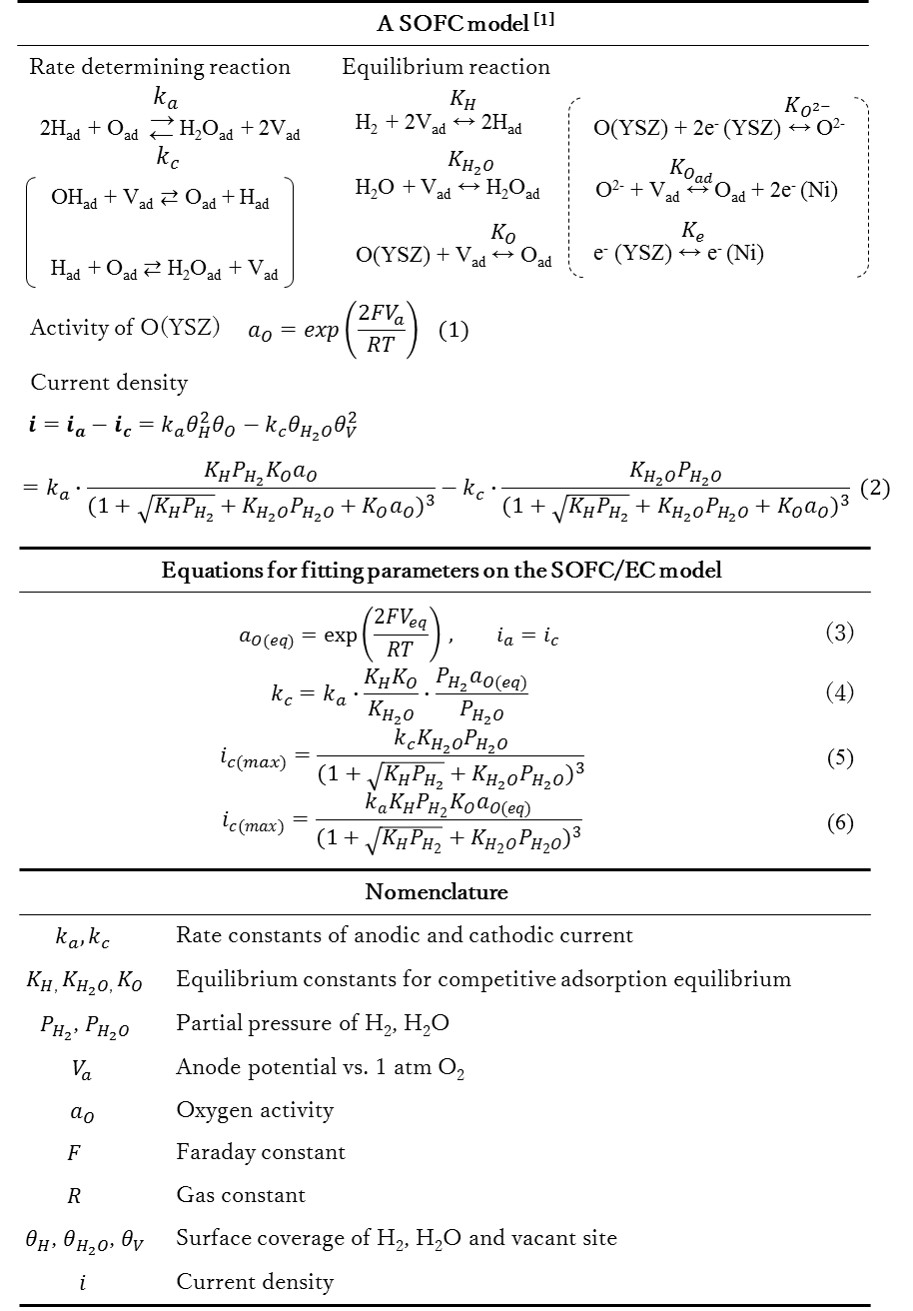