National Harbor 9 (Gaylord National Resort and Convention Center)
K. Suzuki, K. Hasegawa, and M. Ihara (Tokyo Institute of Technology)
Nowadays, silicon solar cells have been the most widespread for commercial use. One of the most promising structure for further improvement of photoelectric conversion efficiency is tandem structure, which connects two types of solar cell. Recently, efficiency of perovskite solar cell (PSCs) has reached over 20%1) in few years, while silicon solar cell has reported as 26.3% for long time2). From fig.1, PSC has a large band gap of 1.5 eV, which makes open circuit voltage (Voc) high. Therefore, it is desirable to apply to a tandem top cell with silicon bottom cell. Fig.2 shows the concept of this tandem solar cell. Ideally, this structure can obtain over 30% efficiency3), but it is required to fabricate thin perovskite film with large grain as an absorber layer. Since a certain range of the wavelength exists in which both perovskite and silicon absorb, we need to balance a photoabsorption between the top and bottom cell by controlling the thickness of perovskite layer for the current matching between each layer. In conventional solar cell, an absorber layer which has a small grain size with many boundary causes fast recombination. Here, the larger grain size makes less grain boundary can reduce this effect.

Generally, the growth of larger grain takes a long time, therefore it is needed to prevent following two negative effects: (1) discontinuity due to crystal growth toward 3-dimentional (3D) and (2) the decomposition of the perovskite layer. In most cases, solution process was adopted to fabricate the perovskite layer, which dissolved precursor of lead iodide (PbI2) and methylammonium iodide (MAI) in an organic solvent. However, the crystals from solution process grow in 3D and large grains were achieved, resulting in the low coverage (appearing the discontinuity). Also, film morphology of the perovskite is severely affected by drying process of the solution. Interestingly, another possible approach to make thin and continuous perovskite film is a dry process. After depositing PbI2, the deposited PbI2 reacted with MAI over 150°C by using sublimation. Most of the report, this process conducted at 150°C4). This process will keep PbI2morphology at some extent and 2D crystal growth can be expected.

In vapor deposition process, PbI2 layer was deposited on the planar TiO2 layer, and on the other side, MAI was deposited by spin coating MAI solution on another glass. Then, both substrates put face to face sandwiching with thermostable tape as a spacer. When the temperature increased from 150 to 180°C, the grain size of the perovskite was much larger than that of PbI2. However, the maximum grain size was limited to 1μm. Photoabsorbance of perovskite increased with increase annealing temperature, but some PbI2 was still detected in this temperature, even though the reaction time extended to about 2h. It indicated that the extent of reaction is still low at this temperature. When temperature reached to 200°C, reaction of PbI2 completed, but the perovskite layer detached from the substrate. It is supposed that excess MAI was segregated after completely reacted with PbI2. In the solid state reaction, MAI powder was put on the deposited PbI2 and directly annealed at 250°C. PbI2 was completely reacted and grain size was larger, but it was still limited to 1μm. Some pores were observed in the interface between TiO2 and the perovskite. It is supposed that maximum grain size of the perovskite might be limited to the grain structure of PbI2. Thus, it is important to obtain the suitable morphology of PbI2 for further improvement of the perovskite grain size. 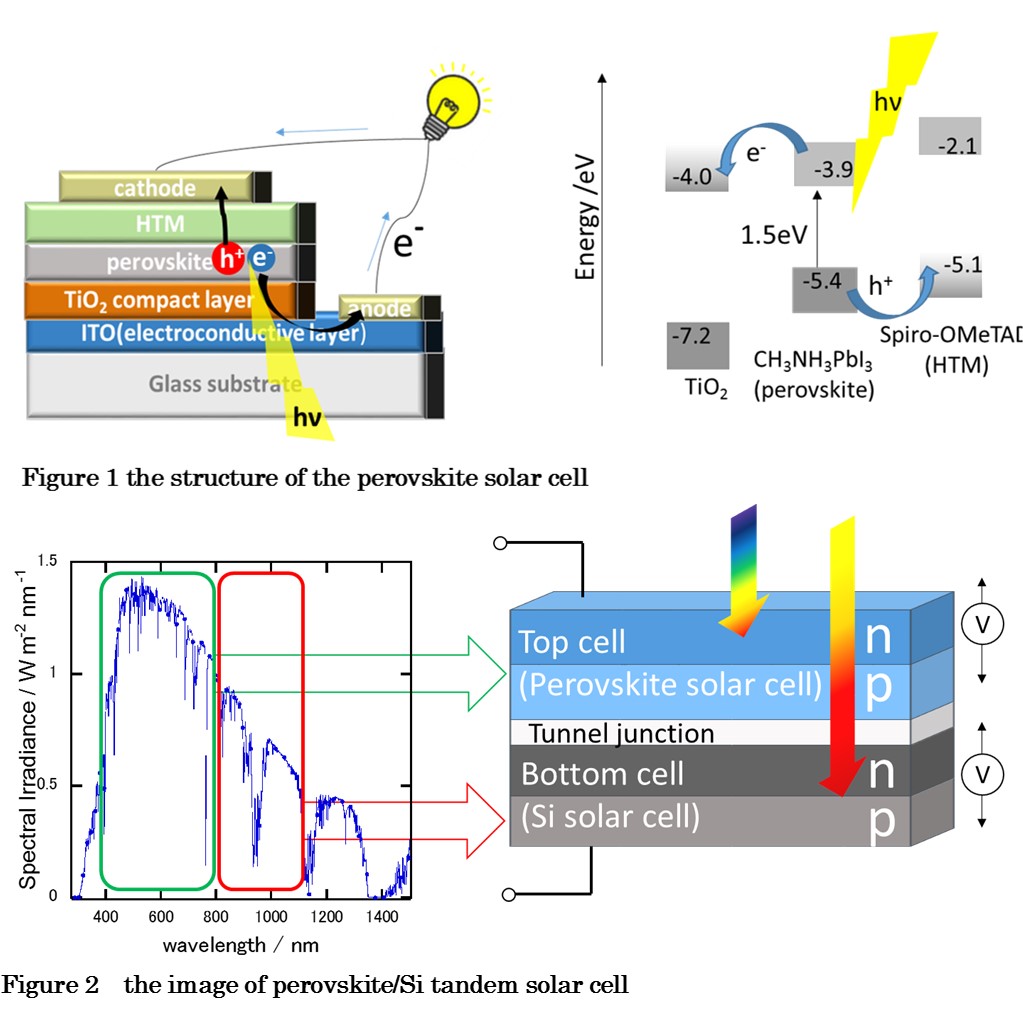