Alloying Pt with transition metals, such as Co and Ni, enhances the catalytic activity for the oxygen reduction reaction (ORR) at cathodes of polymer electrolyte fuel cells (PEFCs). The alloying process necessarily involves a high-temperature thermal annealing step that grows the size of catalyst nanoparticles above 4-5 nm. Particles of this size are known to be more stable under cyclic potentials as they are less prone to Pt dissolution and coalescence than finer scale 2-3 nm Pt particles. However, transition metals are unstable at operating fuel cell potentials and can leach out of the catalyst in the cathode and into the ionomer, resulting in loss of ORR activity.

Post-mortem TEM analysis of aged electrode specimens showed different amounts of Co dissolution from the nanoparticles. There is an apparent direct relationship between the initial alloy Co content the amount of Co dissolved after potential cycles. WAXS analysis confirms significant Co loss from the nanoparticles and also indicates that the Pt-Pt d-spacing in Pt-Co alloy approaches the values typical of pure Pt particles. The effect of Co dissolution on the loss in specific activity for ORR is summarized in Fig. 1a. The data suggest that the specific activity depends not only on the initial Co content but also on the catalyst nanoparticle morphology and size. Even with 27-50% Co loss, the specific activity of Pt-Co alloy remains higher than 1000 mA/cm2-Pt, and exceeds the activity (650 mA/cm2-Pt) of pure Pt of similar particle size. The measured specific activities are consistent with a kinetic model and catalyst-specific choice of kinetic parameters.

The modeled increase in mass transfer overpotentials (ηm) with ageing correlates with Pt loading and ECSA loss and depends on the initial electrode morphology. There is no clear evidence of a relationship between Co dissolution (i.e., effect of Co2+ on O2 permeability in ionomer film) and the resulting increase in ηm. 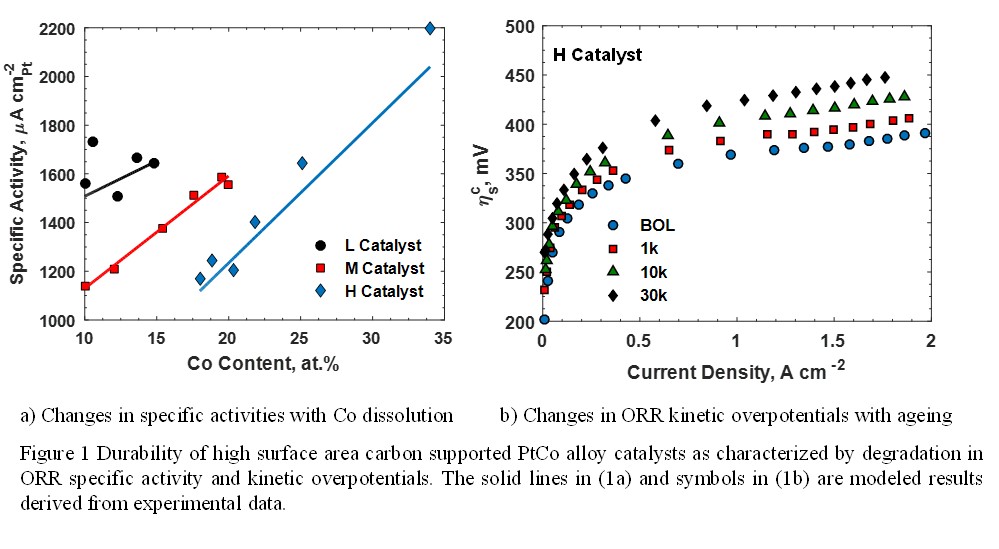