Maryland 2 (Gaylord National Resort and Convention Center)
F. Salimijazi and P. Shirvanian (Tennessee Tech University)
In recent years, public awareness regarding the carbon dioxide emissions and the depletion of fossil fuel reserves has been increased. This motivates the development of the alternative energy sources based technology [1]. The Photoelectrochemical cell (PEC) is a capable clean and renewable way to convert sunlight into a storable chemical energy form. This technology enables the water to be split into hydrogen and oxygen by light-induced electrochemical processes [2]. One of the most studied and promising photocatalysts using in PEC is TiO2, which is relatively inexpensive and stable against photo irradiation while non-toxic [3]. In order to evaluate the PEC performances, the difference between various types of photocatalysts is usually attributed to the difference in their corresponding band gap energies, while the semiconductor particle size has not been taken into account as the main parameter. Having smaller particle size, particularly in the lower nanometer range, can give materials unique properties that could increase photoactivity [4]. There are some basic requirements for materials used as photo-electrodes such as optical function required to obtain maximal absorption of solar energy, the band gap of semiconductor which should be small enough to absorb a significant portion of the solar spectrum, the band edge potentials at the surfaces which must include the hydrogen and oxygen redox potentials, and especially sufficient charge transfer processes as well as the reaction kinetics at the semiconductor/electrolyte interface [5].

The present work reports the study of the kinetic aspects of photo electrochemical cells based on different nanoparticle sizes ranging from 50 nm down to 5 nm of TiO2, by using the electrochemical impedance spectroscopy (EIS) under illumination. The EIS is a useful method for the analysis of kinetic aspects such as charge transfer process that influences the cell performance. To measure the current response to the application of an AC voltage as a function of the frequency, EIS is considered as an electrochemical measurement [6]. Running the EIS is comparatively easy, but the interpretation of the results is often complicated and requires the application of suitable theoretical models. The equivalent electrical circuit is required to fit EIS data to identify the charge transfer phenomenon occurring in the PEC cell under 1 sun simulated illumination [5].

In our analysis, the three different electrode configurations were applied. The three semicircles are attributed to the redox reaction at the platinum counter electrode (Z1), the electron transfer at the TiO2 /electrolyte interface (Z2), and charge carrier transport in the electrolyte (Z3) (Figure 1a). The resistance elements R1, R2, and R3 are labeled as the real part of Z1, Z2, and Z3, respectively (Figure 1b). Therefore, it would be a powerful technique to recognize the internal resistance and the electron transportation of each photoelectrode in various particle size of the TiO2.

A decrement of the internal resistance related to the electron transportation in the TiO2 /electrolyte interface causes an improvement in the electron transportation in the TiO2 thin film, which leads to the improvement of the cell efficiency. Furthermore, the exchange current density of each photoelectrode can be calculated when Rct (Charge Transfer Resistance) is known.

This study is trying to reveal the effect of TiO2particle size on kinetic aspects of the Photoelectrochemical cell (PEC) for hydrogen production. Nanoparticle sizes ranging from 50 nm down to 5 nm were tested using EIS measurements. It was our prediction that by increasing particle size the internal resistance of electron transportation decreases, as per other literature [7]. The process of putting together the working electrode, as well as procedure and results of experiments, will be discussed. 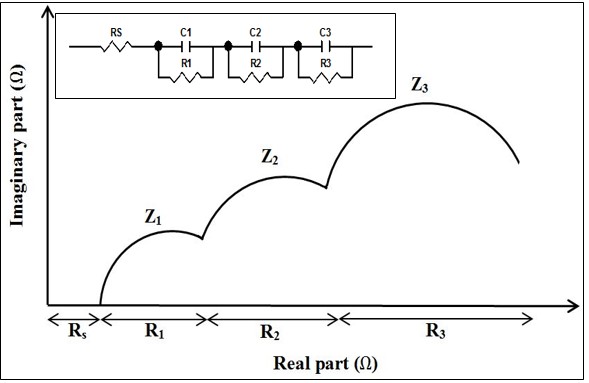