A particularly interesting battery combination arises when the aluminum negative electrode is paired with the evolution of the halogen from the acidic melt. In that case, maximum redox active species concentration is achieved and maximum voltage can be obtained since the entire electrochemical window is utilized. However, several issues with chlorine evolution are known. First, in an acidic melt chlorination of imidazolium cations occurs. This can be partly mitigated by appropriate modification of the cation. A second problem is the somewhat sluggish catalysis of chlorine evolution observed on carbon surfaces.

In this work, we report results of efforts to improve on the latter aspect. Specifically, we describe the catalysis of chlorine evolution by catalytically active surfaces. In particular, we show significant enhancements in onset potential for chlorine evolution using supported Ru catalysts. In Figure 1, we compare the chlorine evolution voltammetry in 1.5:1.0 AlCl3:EMIC on bare glassy carbon to that observed on the same electrode coated with a sample of 60 wt% Ru on multiwalled nanotubes (prepared in-house). The onset of chlorine evolution occurs on the order of 300 mV less positive with the supported Ru catalysts. We have deposited the Ru on various carbon structures to explore the applicability of this catalyst system for batteries and flow batteries. Studies of the same reaction on Pt electrodes show that the supported Ru nanoparticles have similar activity to that of Pt for this reaction.

In addition, similar results were also obtained for bromine evolution. In that case, the lower volatility of the product allowed us to readily observe the bromine oxidation on the reverse scan. This reaction is substantially more reversible on these catalyzed surfaces. 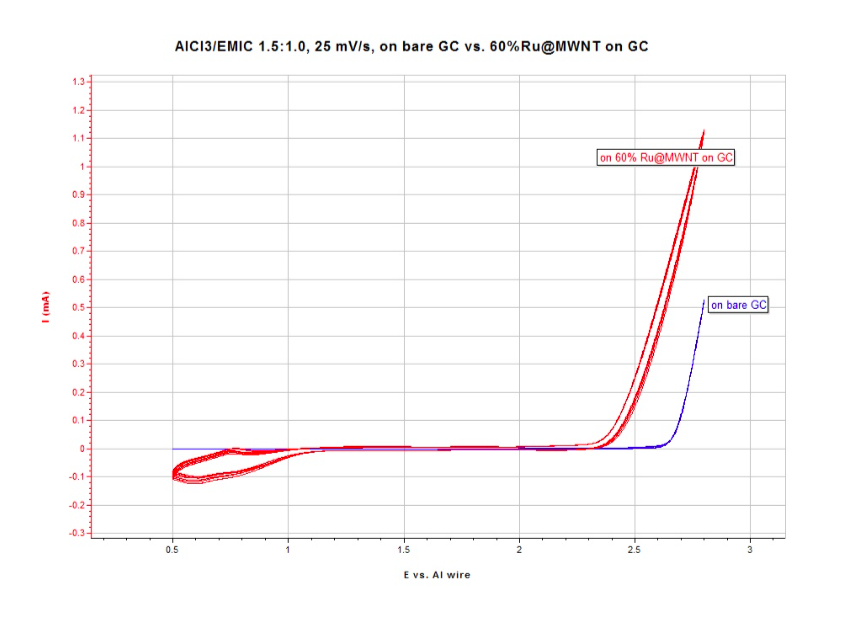