National Harbor 14 (Gaylord National Resort and Convention Center)
A. J. Roy, P. Atanassov, K. Artyushkova, A. Serov (University of New Mexico), B. Zulevi (Pajarito Powder LLC), and M. Rezaei Talarposhti (University of New Mexico)
Anion exchange membrane fuel cells (AEMFCs) offer considerable advantages over proton exchange membrane fuel cells (PEMFCs) in that the kinetics for oxygen reduction reaction (ORR) are greatly improved in alkaline media [1]. The improved kinetics of ORR in alkaline media thus allows for the use of PGM-Free catalysts in AEMFCs. Though there have been many efforts to develop PGM-Free cathode catalysts for AEMFCs, PGM-Free anode catalysts, with catalytic activity for HOR comparable to Pt, are still in the early stages of development [2]. The slow development of these AEMFC anode catalysts is largely due to the lack of compatible ionomers for anion exchange. However, recent development of anion exchange ionomers show great improvements over PEMFC ionomers, such as NAFION, in AEMFCs [3].

Carbon supported nickel has been shown to have high activity for HOR in AEMFCs, however the susceptibility of Ni to electrochemical oxidation, as well as the less than optimal hydrogen binding energy to the Ni active site, suggest there is further room for optimization of the Ni/C system [1]. Here, we have proposed to address these issues through alloying Ni with transition metals to tune the electronic environment of Ni, as well as to improve the corrosion resistance of Ni in alkaline media.

For this project, catalysts are prepared by an incipient wetness method using the metal nitrates as catalyst precursors and KetjenblackÒ, DENKA BLACKÒ, graphene oxide (GO) and reduced graphene oxide (rGO) as support materials. GO and rGO have been prepared from Hummers’ method. In some cases, a sacrificial support method is also used to control the primary particle size of the NiM materials.

Figure 1 shows the open circuit and close circuit polarization curves for NiMo/C with peak power density observed for HOR of ~ 120 mW/cm2, which is an encouraging result though not competitive with Pt or Pd. Therefore, our aim is to explore the role of the alloying metal (M = Mo, W, Cr, Co, Cu) as well as to investigate the role of the carbon support (ex: GO, rGO, N-doped rGO) on the kinetics of HOR in alkaline media on these NiM/C catalysts. 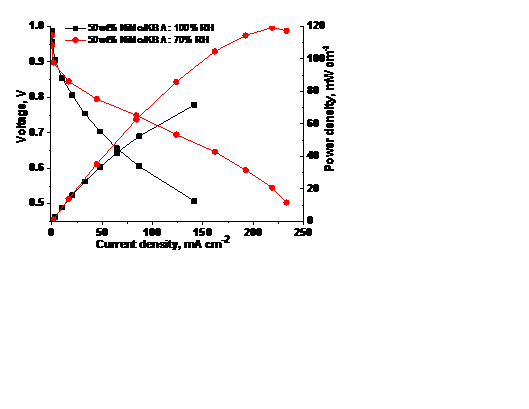