Alsh (Scottish Exhibition and Conference Centre)
Y. De Vos and J. P. Janssens (Bosal ECS NV)
The performance of a cathode air preheater with internal off-gas oxidation is presented. This component is a plate heat exchanger, handling both injection and oxidation of depleted anode gas in the hot cathode flow. The gas mixture oxidizes in the heat exchanger, and the reaction heat is used to preheat cathode air.

An initial integration effort using two separate components is reported. The system consists of a close-coupled injector and a downstream plate heat exchanger, which was catalytically coated. The performance was constrained by reaction kinetics: measurements showed that the off-gas and cathode mixture typically ignited within 5 – 10 ms at mixture temperatures above 750°C.

The integrated HEX and oxidizer consists of an internal injector, which delivers the anode gas to each cathode flow path between pairs of heat exchanging plates. The injection occurs adjacent to a catalytically coated zone in the heat exchanger. The CFD effort covers the combined effects of injection, mixing, generation of reaction heat and heat exchange. The results show that the injection and subsequent mixing is uniform. The mixture reaches the cooled sections of the heat exchanger within 3 ms, and thus below the auto ignition time. These calculations are in line with experimental performance data on the integrated component. 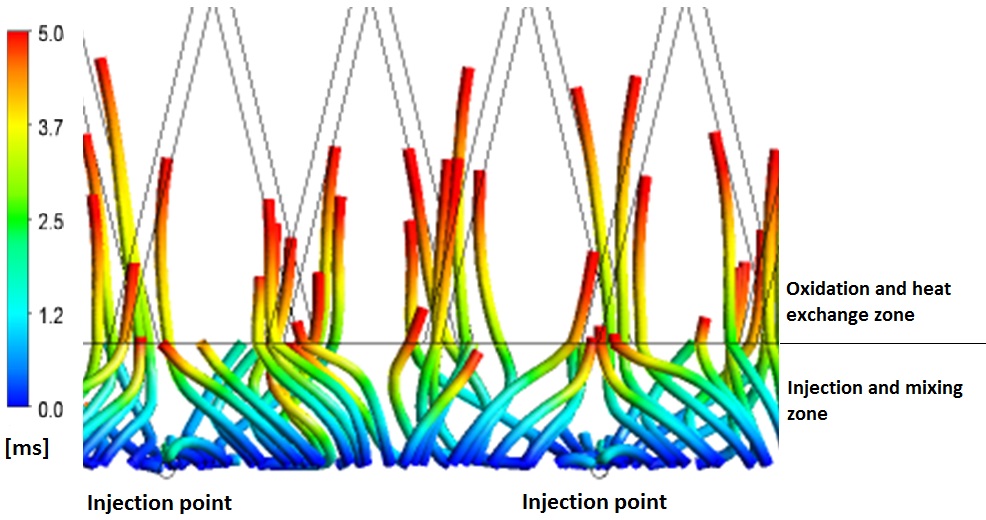