Alsh (Scottish Exhibition and Conference Centre)
S. Herrmann, M. Jimenez Arreola, M. Gaderer, and H. Spliethoff (Technische Universität München)
In the presented work a medium-sized integrated system based on a sodium heat pipes powered allothermal fluidized bed gasification and SOFC is introduced, simulated and validated in Aspen Plus. Suitable feedstocks for such fluidized bed gasification systems are for example waste and biomass, especially wood. The concept development and evaluation have been conducted as part of the EU FCH-JU project SOFCOM.

During the allothermal heat pipes gasification process heat for the endothermic gasification reactions is transported into the gasification chamber via the heat pipes. The heat pipes allow low temperature differences using mainly latent heat transport. Inside the heat pipes sodium is evaporated on the hot side by a heat source (i.e. combustion chamber) and condensed on the cold side (i.e. gasification chamber). Heat pipes based gasification has proven to be a reliable technology at different installations by the company Agnion energy GmbH and others. The gasifier model has been validated against data from this type of gasifier. The SOFC model applied is a thermodyamic model, which has been developed in the frame of SOFCOM and already described in detail in other works.

In the presented system configuration the product gas from the gasifier is cleaned during several process steps at an intermediate temperature of 350°C. After the cleaning procedure the gas is introduced into the SOFC anode where it is converted into electricity and high temperature heat at a fuel utilization rate of 80%. At the same time preheated air is fed to the cathode of the SOFC. The SOFC exhaust is fed into a fluidized bed post combustion chamber where residual fuel is burned with residual oxygen. Heat is extracted via the heat pipes from the combustion chamber, as well as the SOFC itself. Combustion exhaust gases are used to preheat the cathode air. Residual exhaust heat is used to generate high pressure superheated steam, which in turn is expanded in a steam turbine. At this point, the steam necessary for the fluidization of the gasifier and gasification agent is not produced in a separate steam generator but instead extracted from the steam turbine. Especially by means of utilization of excess heat from the SOFC and its exhaust gases via the heat pipes and full integration of the steam cycle the electrical efficiency of the combined system reaches up to 62%LHV. 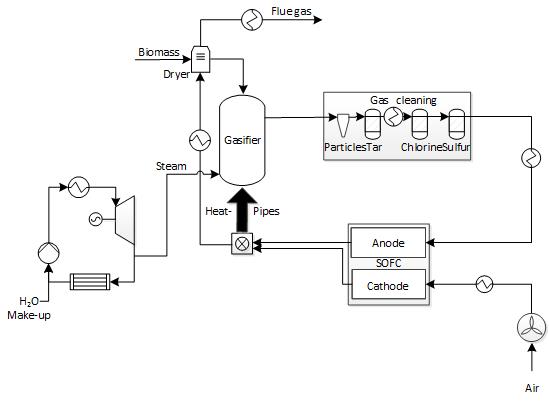