Carron (Scottish Exhibition and Conference Centre)
L. Buannic, W. W. Manalastas Jr., F. Aguesse, M. H. Han (CIC EnergiGUNE), J. M. López del Amo (CICenergiGUNE), G. Singh, A. Llordés (CIC EnergiGUNE), and J. A. Kilner (Imperial College London, CIC EnergiGUNE)
Solid state lithium ion conductors have been identified as very promising candidates for the replacement of liquid organic electrolytes [1]. Not only will they provide a physical barrier to Li dendrite growth but they will also obviate the use of flammable and toxic solvents. Amongst the ceramic candidates, Li7La3Zr2O12 in its cubic phase has been reported as one of the fastest lithium ion conductors (σLi+ = 0.4 mS.cm-1at 25ºC) [2]; however the stabilization of this material in the cubic phase requires high processing temperatures and long sintering times.

Our work has been dedicated to identifying suitable substitution strategies in order to stabilize the cubic phase at lower temperature while maintaining a high density for the material. In addition to studying the effect of Al substitution on the Li site, we have explored the benefits of partially replacing Li+ by Ga3+. The substitution of Li+ by a cation with higher oxidation state decreases the number of charge carriers (Li+) in the structure and could be detrimental to the conductivity of the material. Nevertheless, the preferential location of Ga3+ on the Li tetrahedral sites forces Li+ onto the distorted octahedral sites, thereby increasing the disorder on the Li sites and stabilizing the cubic phase of the garnet. This substitution leads to a considerable gain in conductivity, with values as high as 1.3 mS.cm-1 for Li6.55Ga0.150La3Zr2O12 at 25ºC [3]. Alternative substitutions on the Zr4+site will also be discussed, leading to a wider range of compositional possibilities.

In order to demonstrate the applicability of the garnet electrolytes to commercial systems, the implementation of these substituted garnets in full cell Li-ion batteries will also be reported.

(a) Crystal structure of garnet Li7-3xGax□2xLa3Zr2O12 where La (dodecahedral), Zr (octahedral) and O atoms are represented by dark red, blue, and red circles respectively. Li (octahedral), Li (tetrahedral), and Ga (tetrahedral) are represented in grey, turquoise blue, and green respectively. (b) Enlarged area of the Li vacancy highlighted in (a) showing the Li+ pathways. (c) Arrhenius plot of Li6.55Ga0.150La3Zr2O12between 340 and 180 K. 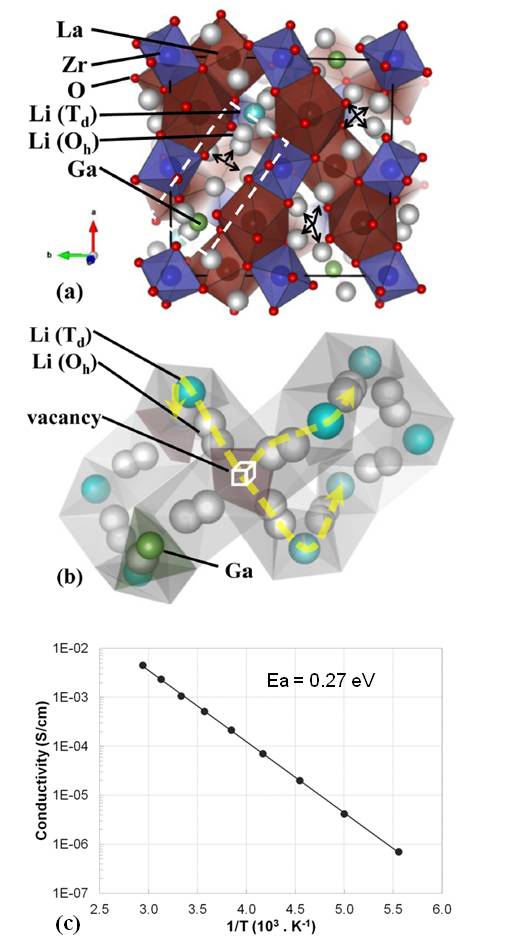