The development of high voltage Li-ion batteries is one of the best ways to increase their energy density.  However, this simple approach has proven to be difficult since electrolyte solvents and additives are unstable at high potentials and the parasitic degradation of these components results in gas evolution, severe impedance growth, low coulombic efficiency (CE) and poor capacity retention [1-2].  Therefore, the development of high voltage electrolyte systems is one of the major bottlenecks in the path of lithium-ion cells with high energy density.

In this presentation, the sulfolane (SL) – ethylmethyl carbonate (EMC) – vinylene carbonate (VC) system is shown to be viable in NMC442/graphite pouch cells that can be cycled at least to 4.5 V for several months. The introduction of electrolyte additives has been shown to improve battery performance indicators such as coulombic efficiency (CE), self discharge, etc.  and while maintaining acceptable impedance when cells are cycled to high voltage. Long-term cycling results were also made to compare with 1 M LiPF6EC/EMC (3:7 wt.%) with and without additives.

The pouch cells employed in this study were uncoated Li[Ni0.4 Mn0.4Co0.2]O2 (NMC442)/graphite cells with a capacity of 240 mAh and coated NMC442/graphite cells with a capacity of 180 mAh. The positive electrode material in the coated cells has been coated with 3 wt% of LaPO4 which appears as nanoparticles on the NMC particle surfaces.  Both types of cells were balanced for 4.7 V operation. 1 M LiPF6EC/EMC (3:7 wt.% ratio, BASF, 99.99%) was used as the control electrolyte.  The NMC442/graphite pouch cells were filled with 0.75 mL of electrolyte (0.90 g for EC:EMC electrolyte and 0.86 g for SL:EMC:2% VC electrolyte). The cells then underwent a formation protocol during which they were opened and re-vacuum sealed at 3.5 V and again at 4.5 V to remove any gas generated during the first charge. After formation, cells were moved to the Ultra High Precision Charger (UHPC). The cycling/storage procedure was as follows: cells were first charged to 4.400 V using currents corresponding to C/10, stored open circuit at 4.4 V for 20.00 h and then discharged to 2.800 V using currents corresponding to C/10. The cycling/storage procedure was designed so that the cells were exposed to higher potentials for significant fractions of their testing time. After these tests, cells were charged or discharged to 3.8 V where impedance spectra were measured. 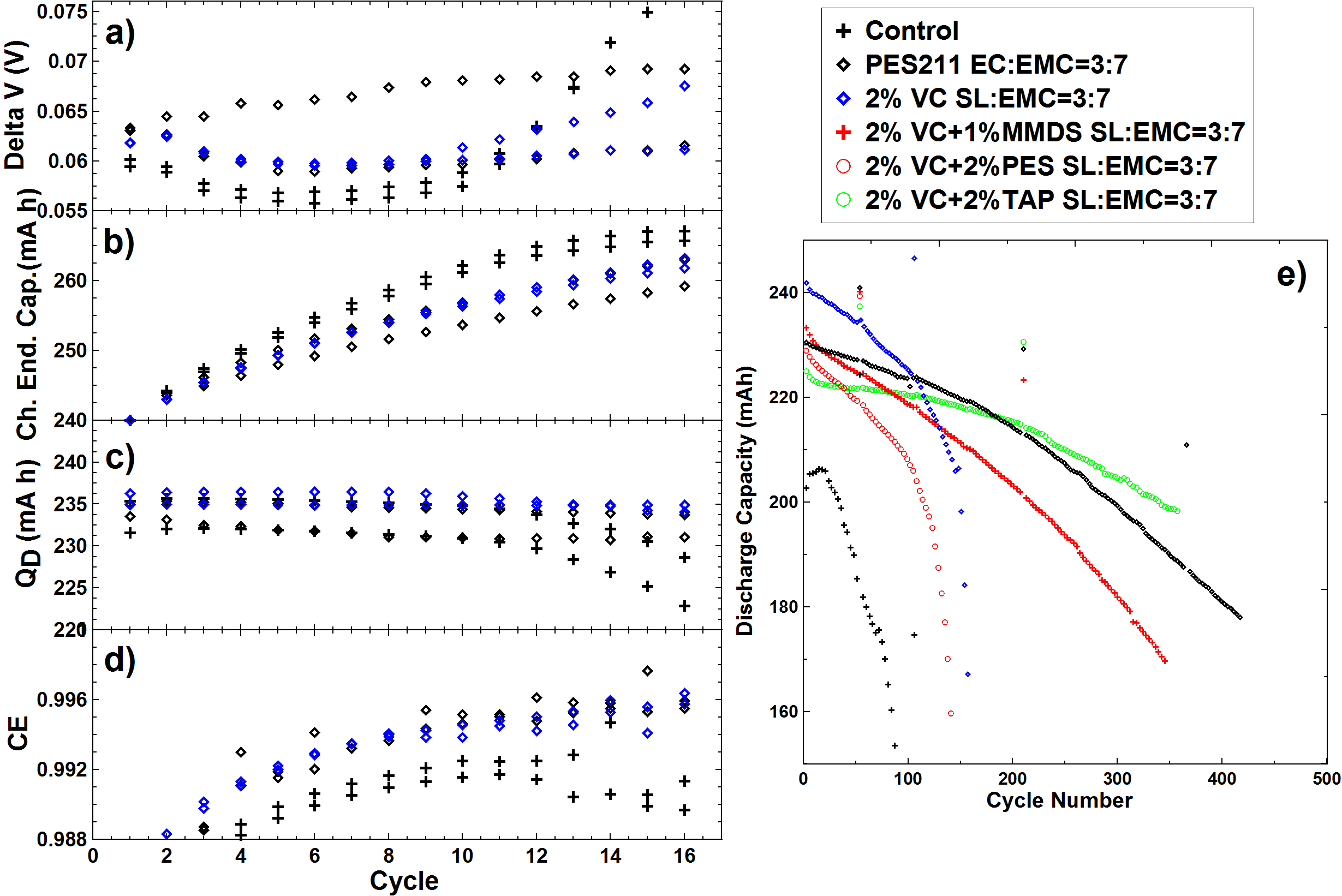