Applications based on Solid Oxide Fuel Cells (SOFC) for the distributed production of energy require the cell to operate with both traditional hydrocarbon fuels (CH4 and LPG) and biomass-derived fuels (biogas, ethanol). Benefits in terms of lifetime and thermo-mechanical resistance are achieved by decreasing the operating temperature to 500-700°C (IT-SOFC). On the one hand, the use of hydrocarbons leads the traditional Ni-based anodes to deactivate due to coke formation; on the other hand, lower temperatures ask for electrolytes different from YSZ, for instance based on Ce oxides. Novel cells and materials are required, whose development must be closely accompanied by numerical model analysis, to rationalize chemical and physical phenomena. In this work, IT-SOFCs based on Samarium doped Ceria (SDC, Ce0.8Sm0.2O1.91) electrolytes and Cu/Pd/CZ80 anodes are investigated for applications with biogas mixtures (CO2/CH4) and syngas mixtures (H2/CO/H2O). Polarization curves and EIS experiments were performed between 600 and 700°C, at varying concentration of the reactants. A numerical model of the SOFC was used to analyze the experimental results and kinetic equations were derived for both the catalytic and the electrocatalytic reactions of the process.

SDC-electrolyte supported cells with Cu/Pd/CZ80 (20 wt% CeO2, 80 wt% ZrO2) composite anodes and LSCF cathodes were prepared by die-pressing. SDC powders containing graphite as pore former were uniaxially pressed with pure SDC powder. This bilayer was calcined in air (1400°C for 3 h) producing a porous 150 μm thick SDC scaffold supported on a dense SDC electrolyte (300 – 380 μm thick). The porous SDC scaffold was impregnated with Cu/Pd/CZ80-based solutions [1]. The LSCF cathode (20 μm) was brushed on the opposite side of the cell. The cell was calcined at 700°C for 3 h. Polarization and EIS experiments were performed between 600 and 700°C with H2/H2O, CO/CO2, H2/CO, and CH4/CO2 mixtures, at different concentration of the reactants and N2 dilution. The EIS tests were performed at the OCV. A model was applied to analyze both the EIS spectra and the polarization curves. The model is one-dimensional, dynamic, isothermal and heterogeneous and allows to predict the cell voltage as a function of current density, temperature, pressure and composition of the anodic and cathodic gas streams. The model includes molecular kinetic schemes for both the catalytic reactions occurring in the anode (CH4 Steam Reforming and Dry reforming, WGS) and the electrocatalytic reactions (anodic H2 and CO electro-oxidation, cathodic O2 reduction). Appropriate correlations are included to account for the presence of electronic current leakage in the electrolyte.

The IT-SOFCs were tested in H2/N2 mixtures at varying H2 partial pressure to derive a power-law kinetic equation for the rate of H2 electro-oxidation. The polarization curves (Fig. 1A) show that the cell voltage decreases at decreasing H2 partial pressure. Coherently, an increase of the polarization resistance at decreasing H2 content is observed in the EIS tests (Fig. 1B). The model predictions well agree with the experiments, assuming that the rate is first order in H2. Under all the operating conditions, the measured OCV values were lower than those expected from the Nernst equation. This result is coherent with the use of Ce-based electrolytes, which at 600 and 700°C show a ionic and electronic mixed conductivity, causing current leakage and decrease of the OCV. The effect was observed also in the EIS tests, wherein the ohmic resistance increased at decreasing the H2 partial pressure. Along with the kinetic investigation, the CO/CO2 experiments allowed to derive a power-law rate for the CO electro-oxidation reaction. The experiments with syngas mixtures (H2/CO and H2/CO2/CO) allowed to verify the kinetic rate of the electro-oxidation reactions, and pointed out the simultaneous occurrence of H2-oxidation and CO-oxidation, which was numerically verified by taking into account also specific WGS kinetic rates. Decrease of the OCV to 0.6 V was observed with the CH4/CO2 feed, although the cell proved resistant to coke formation. Ageing tests under humidified H2/air conditions at 700°C (100% H2, Fig. 1C) reveled loss of performance due to segregation of the Cu phase with time on stream.

The development of IT-SOFCs requires the experimental efforts to be accompanied by numerical tools, able to quantify the contributions of the different chemical, electrochemical and physical phenomena occurring in the cells. In this work, a comprehensive model is applied to rationalize the polarization behavior and the EIS results of a novel, Ni-free, SDC-based IT-SOFC, tested over a wide range on conditions, spanning from biogas to syngas mixtures. 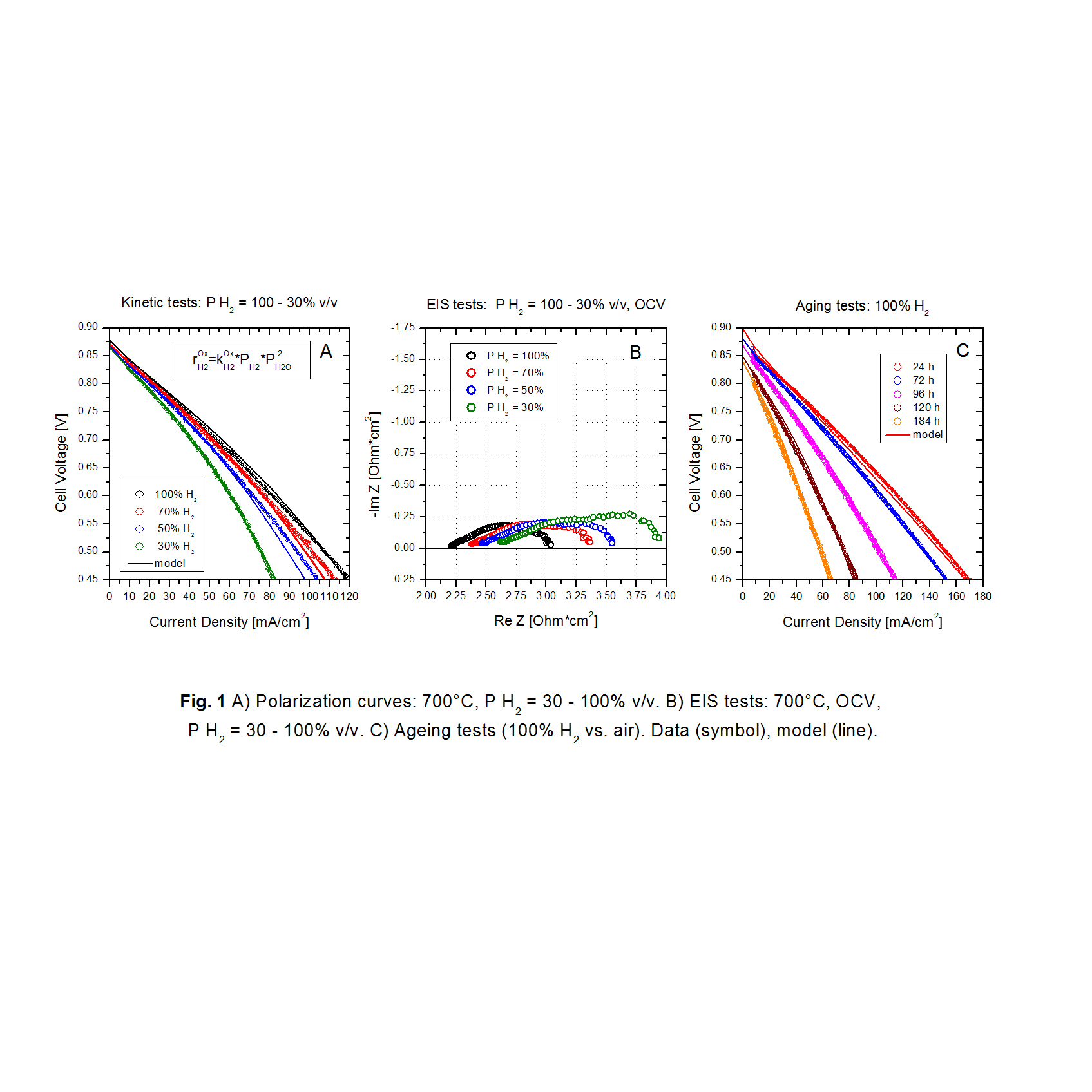