Yttria-stabilized zirconia (YSZ) is used as the most common solid electrolyte in solid oxide fuel cells (SOFC) because of its high ionic conductivity, and the Ni-YSZ cermet is a standard electrode material for SOFC anodes because it satisfies the basic requirements for anodes such as catalytic activity and stability in addition to high ionic and electronic conductivity. To design SOFC system for much higher energy conversion rate, atomistic simulations have been conducted to capture the intrinsic properties in the SOFC materials. For example, the previous theoretical works [1-3] on the anode have been performed for the chemical reaction from O2- and H­2 to water at the triple phase boundary of Ni-YSZ, where oxygen ions in YSZ are naturally O2- ions. However, we can expect other charged state of oxygen such as peroxo O22-, which is one of the important intermediate for catalytic reactions on oxides [4-6]. Therefore a careful consideration on the adsorbed state of oxygen at the YSZ surface is quite important because the catalytic activity is affected by the adsorbed state of the oxygen molecule. In this study, we investigated the electronic structure of an excess oxygen atom adsorbed on YSZ and its dependence on the surface indices from first-principles calculations [7].

We used the low index surfaces (111), (110), and (100) of YSZ to analyze the oxygen adsorbed state. All first-principles calculations were performed by using the Vienna ab initio simulation package with Perdew-Burke-Ernzerh type generalized gradient approximation for the exchange-correlation functional. The core electrons were replaced by projector-augmented wave pseudopotentials, and wave functions were expanded in a basis set of plane waves up to a cutoff energy of 400 eV. We chose a Monkhorst-Pack 3×3×1 k-point grid for the first Brillouin zone sampling.

From the analysis of the partial density of states (PDOS) for the relaxed oxygen rich YSZ(110), we revealed that an excess oxygen atom on YSZ(110) spontaneously moves from an ideal lattice site to an interstitial site for bonding with an adjacent lattice O, yielding a surface peroxo OO (Fig. 1(a)). Figure 1(b) shows PDOS of OO, the surface oxygen atoms Osurf except for OO, the bulk oxygen atoms Obulk, and the surface Zr atoms Zrsurf. PDOS of OO are clearly different from those of Osurf and Obluk because the sharp peaks indicated with arrows in PDOS of OO are observed, on the other hands, such peaks are absent in the PDOS of Osurf and Obulk. We found that the sharp peaks originate primarily from the interaction between two oxygen pair OO because the partial charge densities of the sharp peaks show a particular property of the molecular orbitals in oxygen gas (Fig. 1(c)). According to the orbital occupation, the charged state of OO is 2- per two oxygen, that is peroxo O22-; the 1πg*-like orbitals in OO are fully occupied by electrons. Our finding will expand the reaction path designing on the SOFC anode. 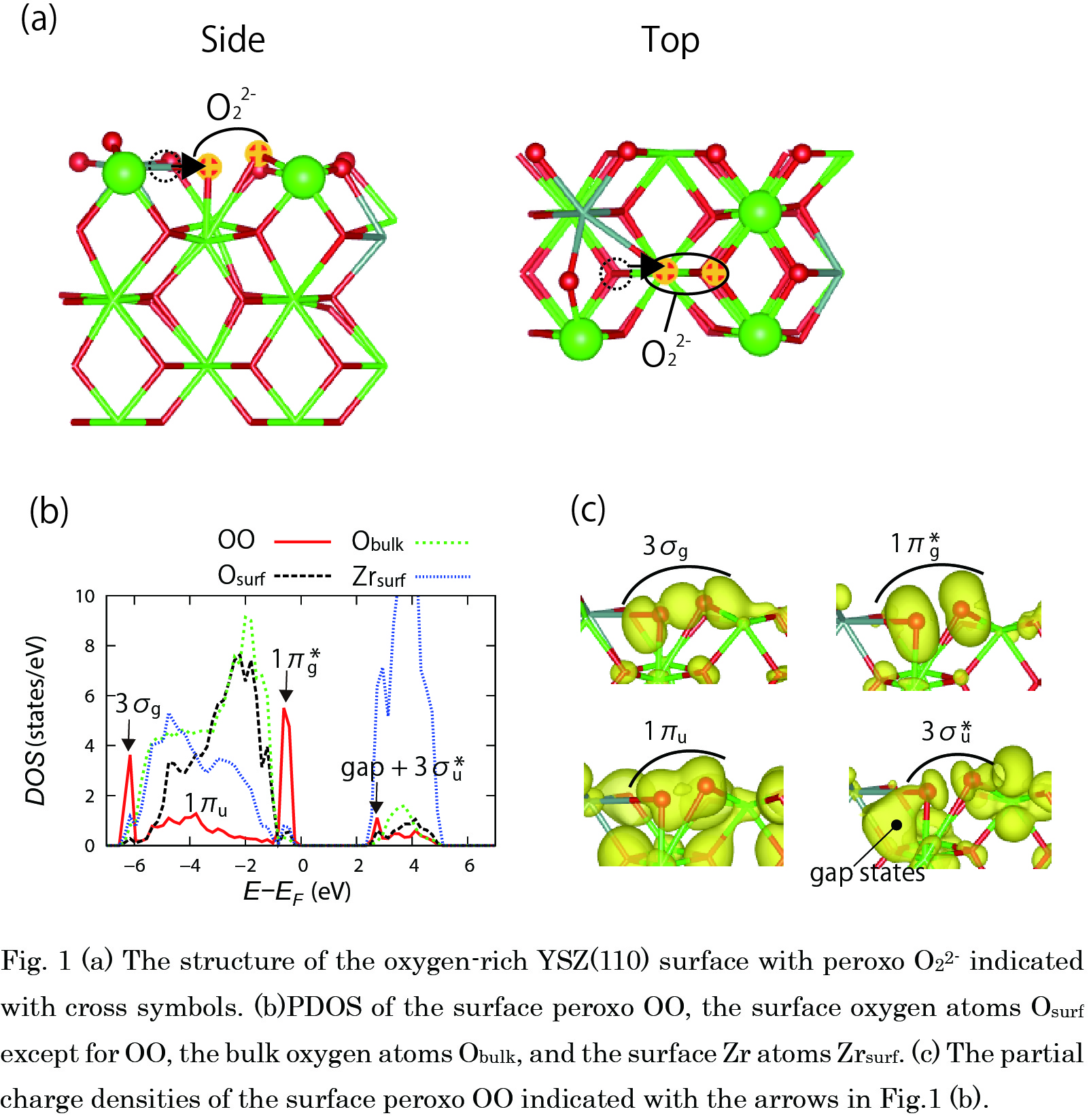