Alsh (Scottish Exhibition and Conference Centre)
A. Chatroux, M. Reytier, S. Di Iorio (CEA-LITEN), C. Bernard, G. Roux (CEA LITEN), M. Petitjean, and J. Mougin (CEA-LITEN)
High Temperature Steam Electrolysis, based on solid oxide electrolysis cells (SOEC) is a promising way to produce hydrogen with high efficiencies. The use of steam instead of liquid water requires less energy for the water molecule splitting, and the high temperature operation (between 700 and 900°C) allows the replacement of a part of the electrical energy by heat, which allows in theory a significant increase of the electrical efficiency compared to alkaline and PEM water electrolysis. Most of works in the field of SOEC around the world are carried out at the cell or stack level. Only few results at the system level, that is to say including the stack and all BoP (balance of plant) components, are reported in literature, although it is a key point because the heat management of the system has to be optimized to effectively reach the high electrical efficiency expected.

For that purpose, the CEA-LITEN has designed and tested a packaged SOEC system demonstrator. It allows producing between 1 and 2.5 Nm3/h of H2 depending on the selected operating point, based on a single stack and the required auxiliaries, including a steam generator at 150°C and high temperature exchangers to preheat the inlet flows from heat recovered in the exhaust gases. A 25-cell-stack already validated in terms of performance [1] is the "heart" of the system. The stack as well as the other components of the system will be described in details, as well as the test results. The first test is presented in Figure 2. At 700°C, the system produces 1.2 Nm3/h of H2 with a total electrical consumption of 3.9 kWh/Nm3, achieving 92% of efficiency, this efficiency corresponding to the higher heating value (HHV) of the produced hydrogen vs the electrical consumption of the system.

Indeed, Fig. 2 shows that during the first 3 hours of operation corresponding to the standby mode and endothermic operation, an external heating (through furnace resistances) is required. But after 3 hours, the operation mode switches from endothermic to slightly exothermic mode, leading to an increase of the hydrogen production up to the targeted flow rate of 1.2 Nm3/h after 5 hours, which is associated to a decrease of the furnace power and an increase of the efficiency. It can be seen that after 5 hours, the furnace power is decreased to zero, without any decrease of the stack temperature. It demonstrates that a 150°C heat source temperature is sufficient for the steam generation, and that a slightly exothermic operating mode of the stack is sufficient to preheat the inlet gas up to 700°C and compensate the heat losses of the system. 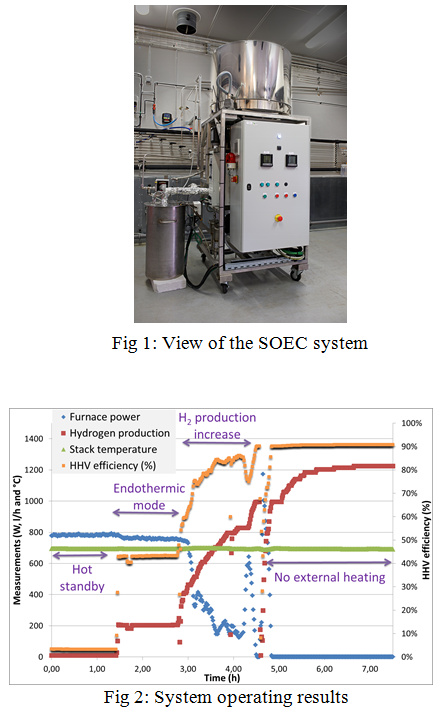