Alsh (Scottish Exhibition and Conference Centre)
L. Bernadet, G. Gousseau, A. Chatroux, J. Laurencin (CEA-LITEN), F. Mauvy (ICMCB), and M. Reytier (CEA-LITEN)
To manage the grid with renewable electrical sources and ensure their storage, hydrogen chains have to be considered. However, hydrogen must be pressurized before being used or stored. The first levels of compression are less energetic for liquids than for the hydrogen gas, therefore the electrolysis of steam directly under pressure has to be studied. On one hand, with the solid oxide technology, the Open Circuit Voltage (OCV) presents the drawback of increasing with pressure. On the other hand, the pressure might improve the reactive species supply to the electrochemical sites and reduce the related losses. Thus, what are the electrolysis performances under pressure? And is there an energetic gain at the system level to produce pressurized hydrogen?

In this context, experimental and modelling approaches have been adopted in order to understand the basic underlying mechanisms of pressurized electrolysis operation. In this frame, SOEC performance tests were realized under pressure in the range of 1 to 10 bars on two types of single commercial cells. They were based on conventional materials and differentiated by their microstructure. Concerning the set-up, the test platform requirements were achieved by developing an innovative mechanical design associated to a specific steam management. Moreover, a previously proposed electrochemical model of solid oxide electrolysis cell was adapted to take into account the pressure effects. The model allows computing all the most important operation parameters such as local current densities, local molar fraction, overpotentials and also the cell microstructural parameters [1].

According to the complete I-V curves from 0 to -1.3 A/cm2 at 800°C with high steam conversion, it has been observed that OCVs respect the Nernst relation under pressure while the limit current appears at higher current values. This work shows that the hydrogen production can be increased thanks to a 10 bars operation at the autothermal voltage.  Moreover, these trends have been analyzed with the model. The impact of pressure on the electrochemical performances is much more important in the range of 1 to 5 bars than above. In our experimental conditions, the diffusion improvement in the porous cathode alone can explain this behavior. Finally, the impact of each microstructural parameter on the cell performances with pressure is discussed. 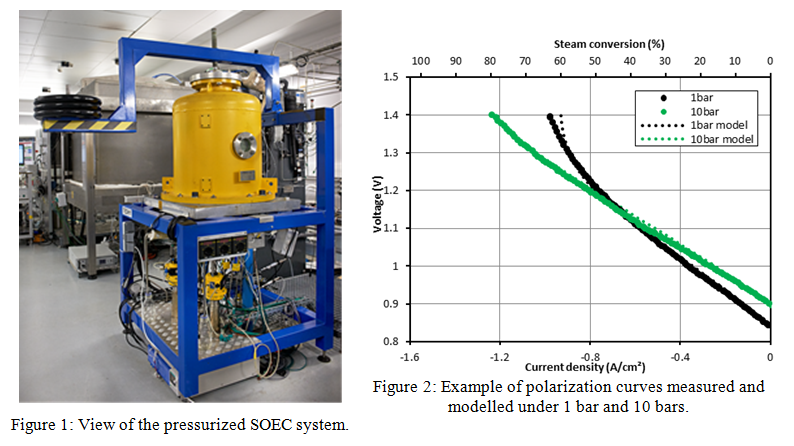