Boisdale (Scottish Exhibition and Conference Centre)
S. Stämmler, R. Merkle, B. Stuhlhofer, G. Logvenov, and J. Maier (Max Planck Institute for Solid State Research)
Recent investigations indicated that oxygen reduction is accelerated at hetero-contacts between perovskite (La,Sr)CoO3-d (LSC) and Ruddlesden-Popper phase (La,Sr)2CoO4+d(LSC-RP) [1-3]. In the present study, we want to quantify the activity of triple phase boundaries (TPB) and distinguish it from the activity of the pure LSC and LSC-RP phases, and evaluate under which conditions LSC/LSC-RP composites could be more active cathode materials compared to pure LSC.

Dense thin films of LSC/LSC-RP composites on single crystalline YSZ were prepared by a single PLD run from a two-phase PLD target with overall Sr content z=nSr/(nLa+nSr) of 0.3 and phase ratio w=nLSC-RP/(nLSC+nLSC-RP) of 0.25-0.75. On the heated substrate, the incoming material from the plasma plume crystallizes into a two-phase mixture (miscibility gap between LSC and LSC-RP). The resulting dense films are a nanocomposite of LSC and LSC-RP phases. For comparison, films of pure LSC and LSC-RP only were deposited under identical conditions. Furthermore, composite samples were deposited as amorphous films on unheated substrates, and crystallized by subsequent annealing.

XRD shows crystalline LSC and/or LSC-RP phases in the single-phase and composite films deposited at 770 °C. The amorphous films developed crystal-like morphology (SEM) at annealing temperatures >500 °C. The SEM images in Fig. 1 show a crystallite size of 50-100 nm for films deposited at 770 °C, and 5-10 nm for amorphously deposited, post-annealed films. The area specific resistance of oxygen reduction (ASR, measured by impedance spectroscopy on microelectrodes) of single phase samples and composites is shown as a function of the volumetric LSC-RP content. The lines show the expected behavior of the ASR under the assumption that TPB effects are negligible. The grey line assumes a Sr content of 30% in both phases, the red curve takes into account that LSC and LSC-RP phases in thermodynamic equilibrium exhibit different Sr content (Sr accumulation in LSC-RP, for overall Sr content up to 40%). This Sr distribution can happen during the PLD films growth, and was evidenced by TEM. Its quantification by XRD on powder samples (glycine-nitrate process, annealed at 1200 °C) is shown in Fig. 2. Since the oxygen exchange activity of LSC decreases more steeply with decreasing Sr content than the activity of LSC-RP increases [4,5], the expected overall ASR of composite films is higher considering this distribution.

The post-annealed sample with high TPB length (about 106 cm/cm2) showed the lowest ASR of all composites, but also deactivated most quickly (under morphological changes such as coarsening). The composites deposited at high T with shorter TPB lengths (105 cm/cm2 or less) exhibit a higher ASR, and after initial deactivation most of them are situated at or above the red curve. XRD/TEM indicated formation of a higher-order Ruddlesden-Popper phase at expense of LSC in some samples, which could explain an activity below the red curve. Taking the red curve as reference ASR (absence of TPB effects) for the two most active composites, their length specific resistance was in the range of 1-2 MΩ∙cm. At 500-600 °C their ASR is lower than the values obtained in [3] for a slightly larger overall Sr content.

To summarize: dense composite films can be deposited in a single PLD run, with crystallite sizes down to 5-10 nm. The effects of Sr distribution increase the overall ASR compared to single phases with same overall Sr content, and unless very high TPB lengths are achieved (or high overall Sr/La ratios are used which diminish this effect) this effect prevails over the small activity enhancement which is specifically caused by the LSC/LSC-RP hetero-contacts. 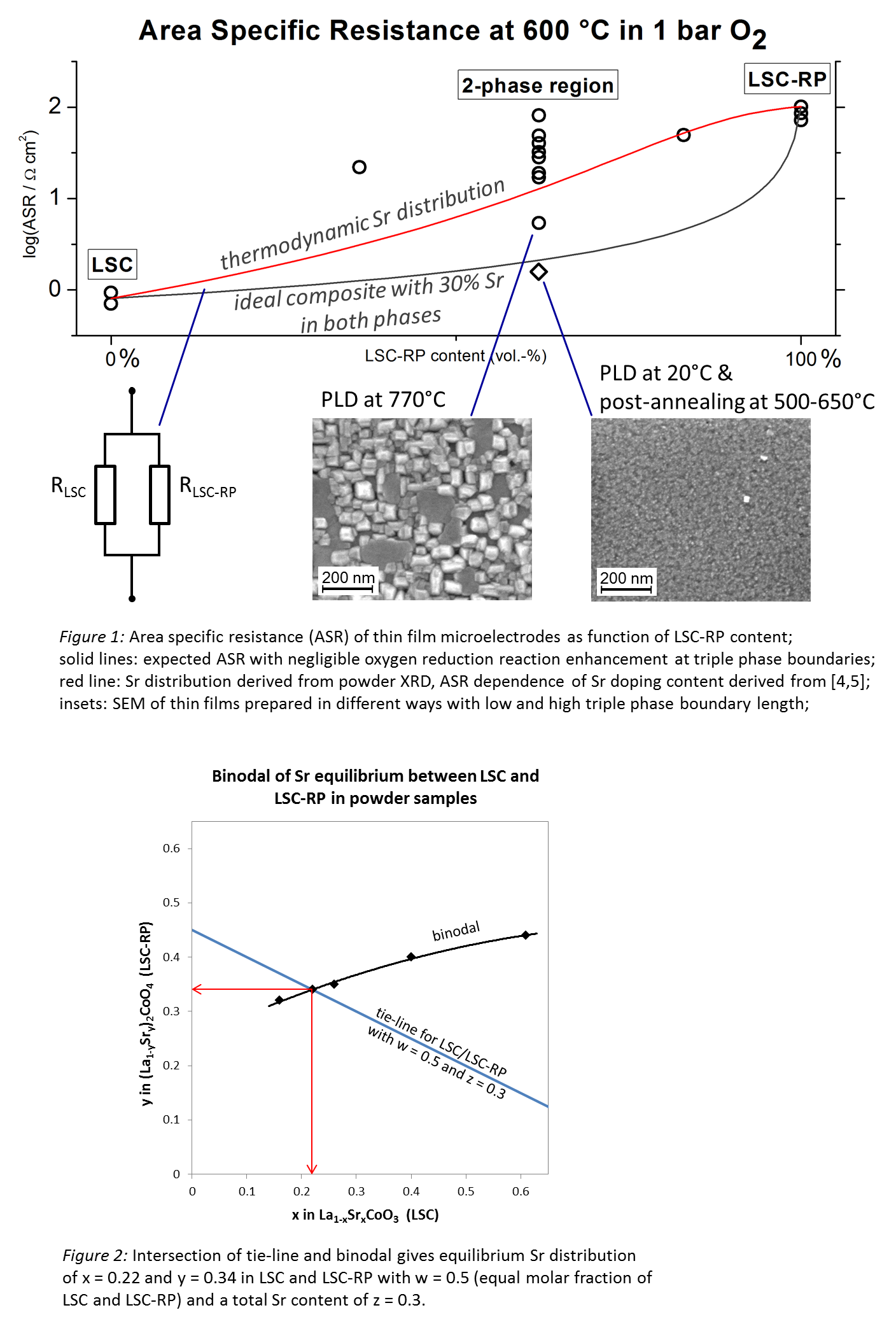