107
Soft X-Ray Absorption and Photoemission Study on the Electronic Structure of (La,Sr)CoO3

Boisdale (Scottish Exhibition and Conference Centre)
S. Miyoshi and S. Yamaguchi (The University of Tokyo)
A perovskite-type oxide (La,Sr)CoO3 (LSC) has been extensively studied as a cathode material of SOFC due to its high performance.  In comparison to the other cathode materials, the bulk property of LSC can be characterized by a large oxygen nonstoichiometry, high oxide ion diffusivity, and high electronic (hole) conductivity, while it is not clear which is the factor governing the high catalytic and cathode performance.  On the other hand, discussions have recently been made on the correlation between electronic structure and cathode properties.  After evaluation of surface exchange coefficient and defect chemical analyses on a series of solid solution SrTi1-xFexO3, it was suggested that the overall cathode reaction kinetics is mainly determined by the density of minority electronic carrier in bulk, in other words, the position of the Fermi energy relative to the electronic band structure [1].  It is also proposed that the oxygen reduction reaction (ORR) activity of a series of perovskite oxides, although the reaction in aqueous electrolyte is concerned, is primarily correlated with the electronic state of the B-site transition element, that is, the occupation of eg orbital and extent of covalency against oxygen [2].  The fundamental understanding on the electronic structure of cathode materials is thus required.

While there have been many studies on the electronic structure of LSC by means of x-ray spectroscopies and DFT calculations, most of them are concerned with the electronic transport and magnetic property, and sometimes lack determination of chemical situation of the specimens.  In this study, the authors report the comprehensive analyses of the electronic structure for LSC by using soft x-ray absorption and photoemission spectroscopy in consideration of chemistry in bulk and the cathode reaction process.

Dense specimens of LSC have been prepared via a citrate process, and the surface has been polished finally with 0.1um diamond abrasive.  The specimens have been heat-treated under some conditions of temperature and oxygen partial pressure (Po2), and subjected to x-ray spectroscopic measurements.  O K-edge and Co L-edge XAS spectra have been collected at BL-11A and -19B of Photon Factory, KEK, Japan.  XPS spectra of the constituent core level and valence band have been collected with an x-ray photoemission spectrometer (PHI5000 / ULVAC-PHI).

Fig. 1 shows the O K-edge XAS spectra of La0.6Sr0.4CoO3-d (LSC40) collected in electron yield mode.  The main absorption feature (C) observed around 536eV is rather insensitive to the heat-treatment condition, and can be assigned mainly to La5d and Sr4d hybridization orbital.  On the other hand, the low energy feature (A-B) ranging 526-531eV show a significant change depending on the heat-treatment condition.  It is noted that among the T-Po2 conditions examined, the oxygen nonstoichiometry (3-d) changes in the following order: 2.95 under (T, Po2)=(873K, 1atm), 2.89 (1073K, 10-1atm), 2.83 (1073K, 10-3atm(Ar atmosphere)) [3].  The absorption intensity at the lowest energy part (A) drastically decreases upon reduction.  From the XPS measurements, it is observed that the binding energies of the constituent core level, except for Co2p, increases upon reduction.  The above observations suggest the following picture.  With decreasing oxygen content, the electron hole introduced by Sr-doping reduces, leading to the decrease in the unoccupied density of state corresponding to the absorption feature (A).  At the same time, the occupied density of states in the valence band increases and the Fermi energy upward shifts.

In contrast to the O K-edge XAS spectra, the Co L-edge absorption spectra are overall less sensitive to the heat-treatment condition, apart from slight energy shift and appearance of shoulder structure.  It is widely known that L-edge absorption structure of Co and also the other transition elements significantly changes according to the valence and spin states.  It is therefore suggested that the charge compensation for extrinsic defects is practically taken by oxide ion rather than by Co; that is, the electron hole may be expressed as O-.  This behavior can be ascribed to the large extent of covalency, and has been observed also for Fe-doped BaZrO3[4]. 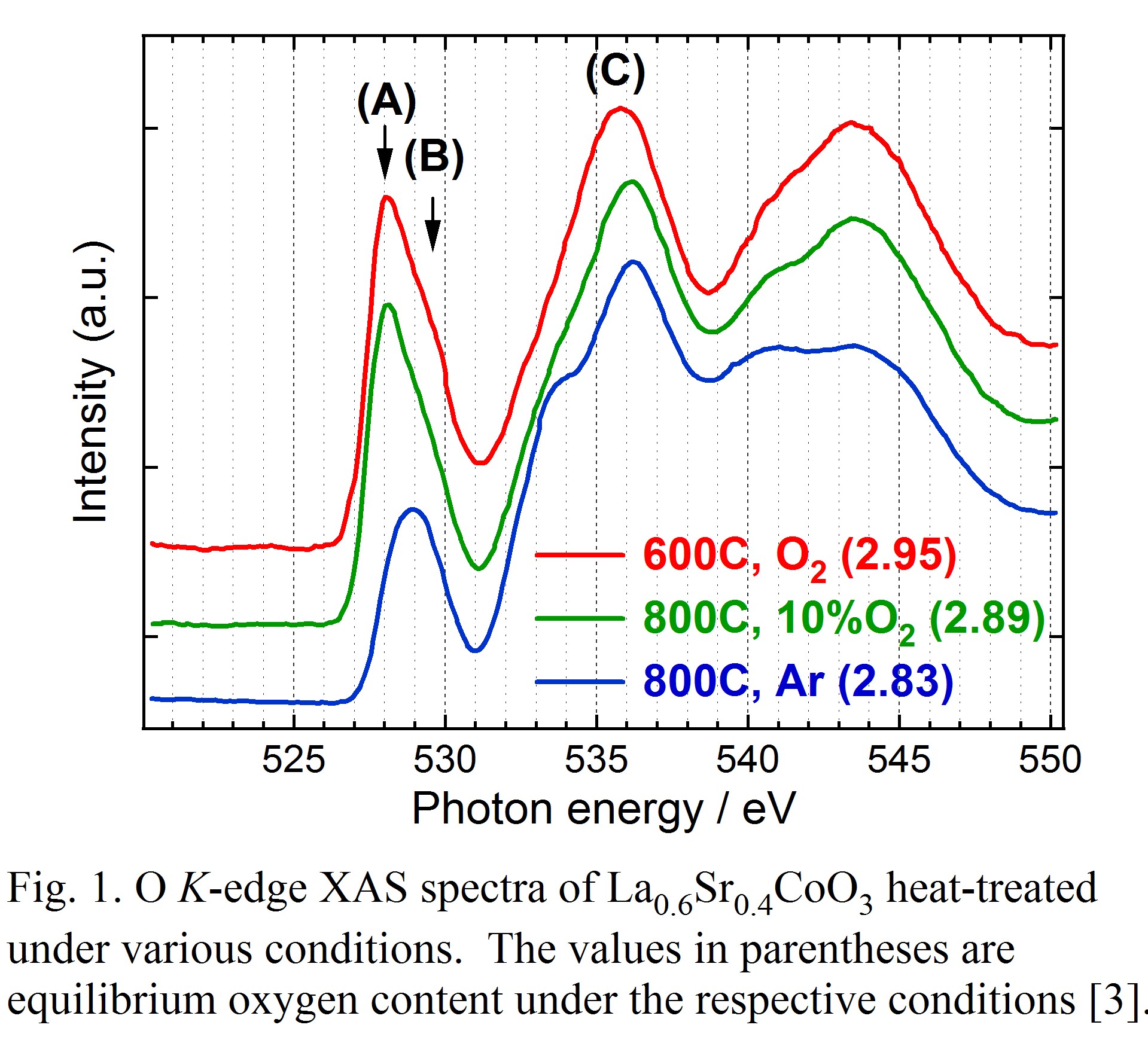