Formation of carbon nanotubes in Ni containing fuel electrodes has previously been observed in co-electrolysis of H2O and CO2 [1]. Hence, the carbon formation threshold in an operating cell was investigated during electrolysis of an idealized reactant atmosphere of CO and CO2. The electrolysis current was gradually increased in steps until the cell voltage spontaneously increased, thereby indicating cell degradation and possibly the onset of carbon deposition. The outlet gas composition at each current step was estimated based on the inlet gas composition and the reactant conversion using Faraday's law. The increase in voltage was observed at lower pCO/pCO2 ratios than that corresponding to the thermodynamic threshold for carbon formation. Electrochemical impedance spectroscopy in both H2/H2O and CO/CO2 revealed an increase in resistance of the fuel electrode after each CO2 electrolysis current-voltage curve, indicating possible carbon deposition. The difference in partial oxygen pressure between inlet and outlet was analyzed to verify carbon deposition. The increase in voltage is likely due to either blocking of the reaction sites by the deposited carbon, or due to the microstructural damage caused by the carbon, or a combination of these.

Moreover, the current step-size and step-length was varied to investigate the time-dependence of the detection of carbon deposition. Initial results indicate that for longer current steps, carbon formation is observed at lower pCO/pCO2 ratios. This is related to the rate of carbon deposition and the averaged nature of the cell voltage measurements. Possible reasons for these observations will be discussed in detail.

In an attempt to mitigate the degradation due to carbon deposition, the Ni-YSZ electrode was infiltrated with a gadolinium doped ceria (CGO) solution. Initial results indicate that the coking tolerance was not enhanced, but it is still unclear whether infiltrated cells degrade less. However, infiltrated cells display a significant performance enhancement before coking, especially under electrolysis current.

The investigation thus indicated carbon formation in the Ni containing fuel electrode before the thermodynamically calculated threshold for average measurements of the cell was reached. The deviation from the average threshold was reproduced on several cells and quantified (figure 1). The observation of carbon formation on a local, microstructural level before the expected thermodynamic threshold for average measurements on the cell level, is of crucial importance when choosing operating conditions for commercial systems. The effect would be even more severe on stack level, where the gas diffusion and temperature gradients are more pronounced. Initial results of the mitigation strategy of infiltrating CGO are negative, but increased performance prior to coking was observed. 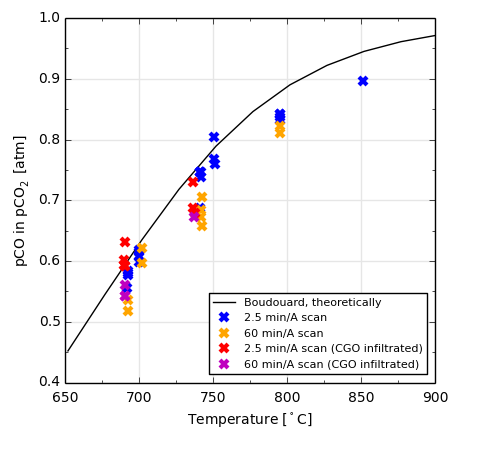