Alsh (Scottish Exhibition and Conference Centre)
H. Uchida, P. Puengjinda, K. Miyano, K. Shimura, H. Nishino (University of Yamanashi), K. Kakinuma (Fuel Cell Nanomaterials Center,University of Yamanashi), M. E. Brito, and M. Watanabe (University of Yamanashi)
Solid oxide fuel cells (SOFCs) are, in principle, able to be operated in reverse as solid oxide electrolysis cells (SOECs) to generate pure hydrogen from water vapor with the highest efficiency. Since the pioneering work in late 1960s (1) and HOT-ELLY (hot-electrolysis) project in 1980s (2), the materials and system for the SOECs have been extensively investigated (3). We have engaged in the research and development of high-performance electrodes with novel architecture for the SOEC/SOFC reversible system (4-9). The essential factors to improve the electrode performance are a high electrocatalytic activity and an extended effective reaction zone (ERZ: effective transport of gas, ions, and electrons). In the present work, we demonstrate that the microstructure of both hydrogen and oxygen electrodes plays an important role in reducing the ohmic and polarization losses under reversible SOFC/SOEC operations.

Figure 1 shows cross-sectional SEM images of double-layer (DL) hydrogen electrodes (6) prepared on YSZ electrolyte. The DL electrodes consisted of a mixed conducting samaria-doped ceria, (CeO2)0.8(SmO1.5)0.2 (SDC), with highly dispersed Ni0.9Co0.1 catalysts (8 vol%-Ni0.9Co0.1)  as a catalyst layer (CL, thickness = 14 to 16 μm), on top of which a Ni-SDC cermet (60 vol%-Ni) was attached as a current collecting layer (CCL) with a thickness of 5 to 20 μm. A SEM image of the single CL without CCL is also shown for comparison in Fig. 1 (a). The porosity of the CCL has to be high to increase the gas-diffusion rate. The CCLs formed on the CL were found to be uniform in the thickness and the apparent porosity was 69 to 70%, irrespective of the thickness.

A test cell was prepared with the following configuration:

The oxygen electrode employed was a composite of La0.6Sr0.4Co0.2Fe0.8O3 (LSCF) with 40 vol% SDC. A detailed analysis of the oxygen electrode microstructure is given elsewhere (8). As a Pt/air reference electrode, a Pt wire was wrapped along the lateral of the YSZ electrolyte disk and fixed with Pt paste. Figure 2 shows steady-state IR-free I−E curves of the DL hydrogen electrodes, which were measured by the current interruption method, in the reversible SOFC/SOEC operation mode with H2 + H2O (p[H2O] = 0.4 atm) at 800ºC. The thickness of the CCL showed a significant effect in reducing the polarization loss. The test cell with 5 μm-CCL exhibited the highest performance in both SOFC/SOEC operations, i.e., the IR-free cathode potential at j = −0.5 A cm−2(SOEC operation) was −1.16 V vs. air reference electrode, which corresponds to an overpotential of  −0.20 V.

We also expect that the thin CCL with high electronic conductivity can act as a micrometer-size current collector to minimize the ohmic loss between the separator (interconnect) and the CL in stacks. The ohmic resistance of the test cells Rcell was indeed smaller than that without the CCL, and reached the minimum value with the 5 μm-CCL. This suggests that the whole Ni0.9Co0.1/SDC of the catalyst layer can work effectively. A further increase in the CCL thickness (≥ 10 μm) increased the Rcell (additional ohmic resistance of the cermet). The gas diffusion rate through the CCL is presumably slowed down with increasing the CCL thickness. In summary, the 5 μm-CCL provides the best balance in enlarging the ERZ by an effective transport of gases (H2O and H2) and an effective conductive network for electrons and oxide ions.

This work was supported by the funds for “Advanced Low Carbon Technology Research and Development Program” (ALCA) from Japan Science and Technology Agency (JST). 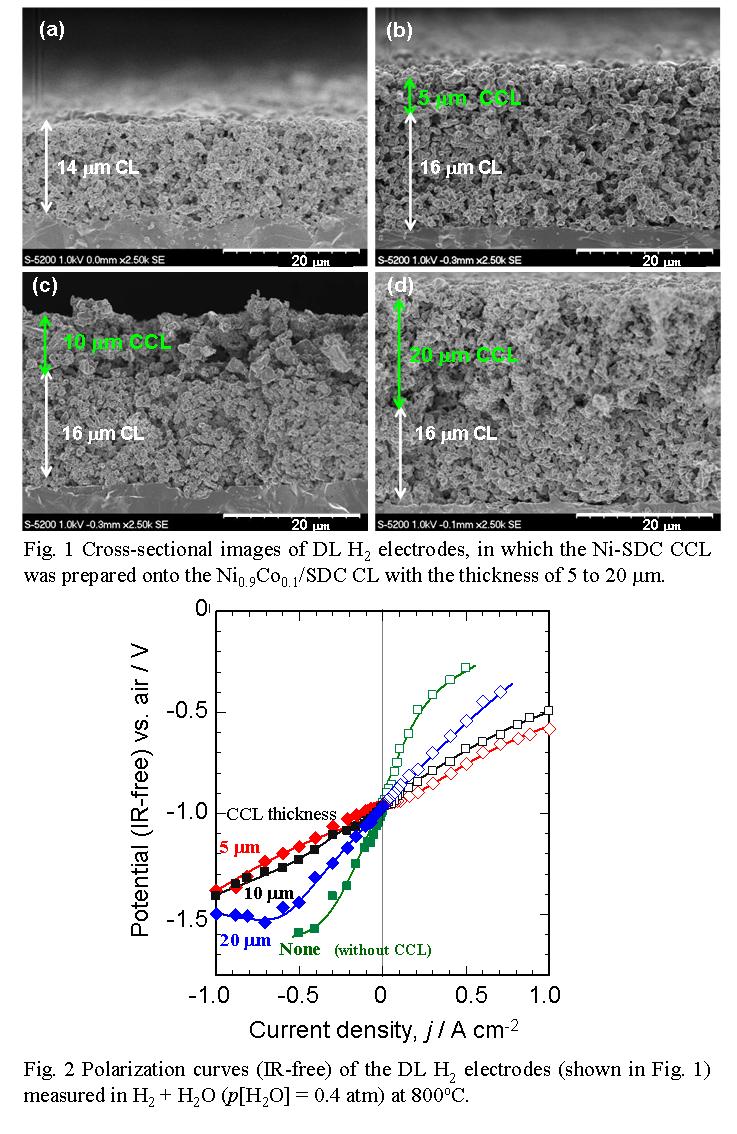