In this presentation, fluorinated carbonate mixtures which are composed of fluoroethylene carbonate (FEC) and bis(2,2,2-trifluoroethyl) carbonate (TFEC) are shown to be viable in NMC442/graphite pouch cells that can be cycled to at least 4.5 V. The introduction of proper electrolyte additives has been shown to improve the cell performance. Long-term cycling results were also made to compare with 1 M LiPF6 EC/EMC (3:7 wt.%) with and without additives.

The pouch cells employed in this study were Li[Ni0.4 Mn0.4Co0.2]O2 (NMC442)/graphite cells with a capacity of 240 mAh and coated NMC442/graphite cells with a capacity of 180 mAh. The positive electrode material in the coated cells has been coated with 3 wt% of LaPO4 which appears as nanoparticles on the NMC particle surfaces.  Both types of cells were balanced for 4.7 V operation. 1 M LiPF6 EC/EMC (3:7 wt.% ratio, BASF, 99.99%) was used as the control electrolyte.  The NMC442/graphite pouch cells were filled with 0.75 mL of electrolyte (0.90 g for EC:EMC=3:7 based electrolyte and 1.15 g for FEC:TFEC=1:1 based electrolyte). The cells then underwent a formation protocol during which they were opened and re-vacuum sealed at 3.5 V and again at 4.5 V to remove any gas generated during the first charge. In-situ gas measurements were made using the apparatus and procedure described in reference [3].  After formation, cells were then moved to the Ultra High Precision Charger (UHPC) for cycling.  Storage tests were also used as were frequency response analyzer/cycling (FRA) experiments to measure the impedance growth during cycling [4]. The detailed testing method used in the FRA experiments is described in ref [3]. After these tests, cells were charged or discharged to 3.8 V where impedance spectra and gas volume produced were measured.

Figure 1a shows the cell voltage versus time of two NMC442/graphite pouch cells with control and 2% VC in EC:EMC 3:7 electrolyte.  Data for three other cells with, 2% PES, 2% PES + 1% MMDS and 2% PES + 1% TTSPi in FEC:TFEC 1:1 electrolyte are also shown.  Figure 1b shows the in-situ gas volume versus time during the first two cycles for the same cells as shown in Figure 1a.  Figures 1a and 1b show the FEC:TFEC electrolyte system containing PES as an electrolyte additive produces much less gas during the first a few cycles compared to the EC:EMC electrolyte system when charged to 4.5 V. However, a steady increase in gas volume produced occurs.  Figure 1c shows the resistance, Rct, as a function of voltage for the NMC442/graphite pouch cells with 2% PES in FEC:TFEC 1:1 electrolyte at 40. ± 0.1ºC measured using the FRA. Figure 1c shows that Rct of the cells with FEC:TFEC:PES electrolyte does not increase when charged from 3.8 V to 4.5 V in each separate cycle. However, Rct increases as the cycle number increases.   This suggests that FEC:TFEC electrolytes will not solve the problems associated with high voltage NMC/graphite cells.

Figure 1. (a) Cell voltage versus time during the first 260 h for the 240 mAh NMC/graphite pouch cells in FEC:TFEC 1:1 electrolyte with different additives cycled at C/20 (12 mA) and 40.0ºC; (b) Gas volume versus time measured using the Archimedes’ in-situ gas analyzer during the first ~260 h (2 continuous cycles and 2 cycles with 10 hour holds at 4.5 V). (c) Rct as a function of voltage measured every 5 cycles from 3.8 to 4.5 V on FRA. Rct increases with cycle number 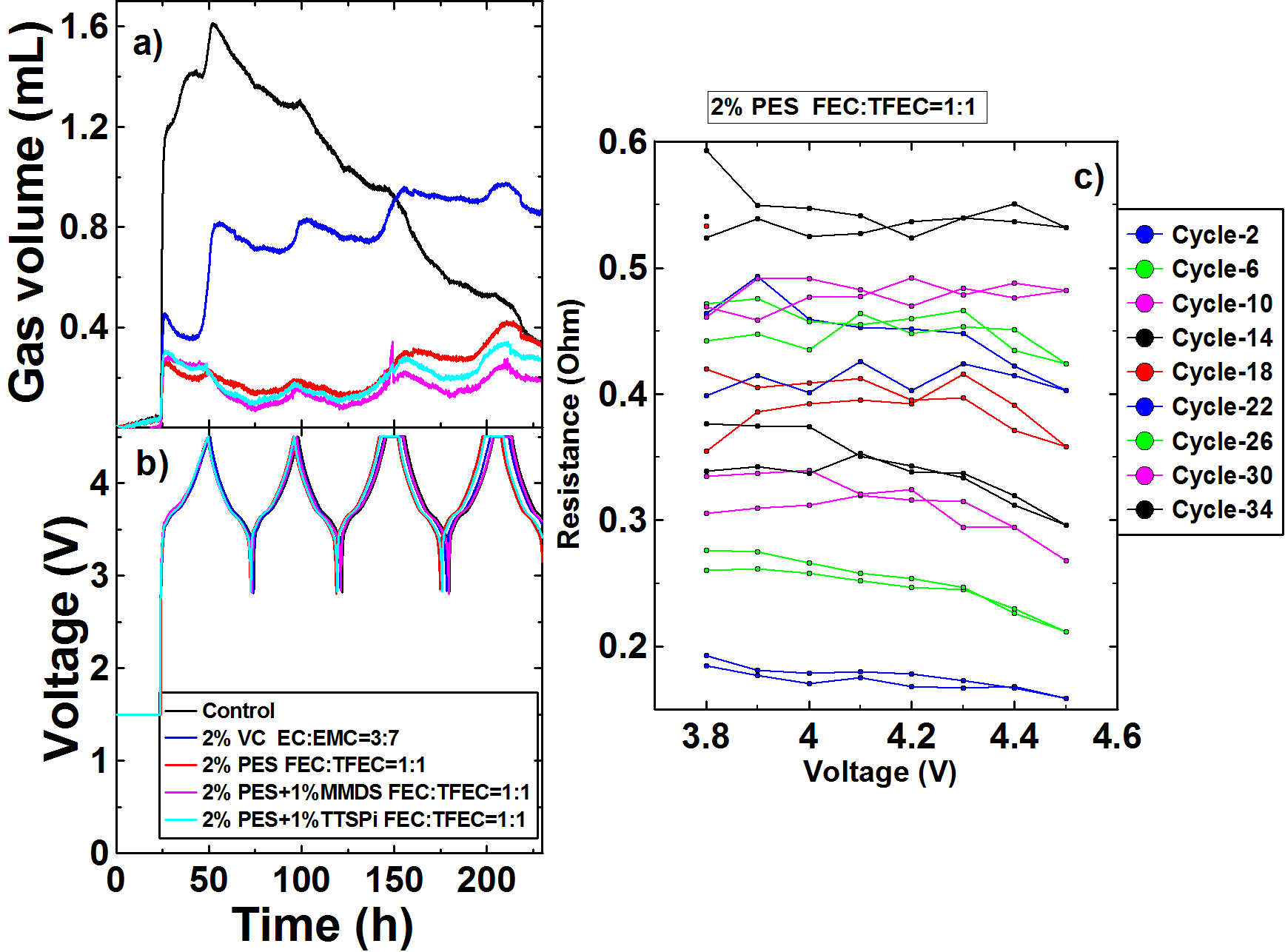