Carron (Scottish Exhibition and Conference Centre)
R. H. Brugge, A. Aguadero (Imperial College London), and J. A. Kilner (CIC EnergiGUNE)
Lithium stuffed garnets such as Li7La3Zr2O12  (LLZO) show promise as solid state lithium ion conductors for use in high energy density storage applications due to their chemical and thermal stability and electrochemical performance versus current technology electrolytes. Much work has focused on improving the conductivity of these systems by optimizing the lithium content in the cubic garnet phase rather than the less conducting tetragonal polymorph1.

Despite extensive studies on these materials, there is uncertainty as to the preferred migration of Li; whether the ions move from one octahedral (Oh) site to another via a neighbouring tetrahedron (Oh-Td-Oh path), or hop directly across Oh sites, bypassing the Td site (Oh-Oh path), is still up for debate2,3.

We seek to confirm the lattice site occupancy of the mobile lithium ions and their associated conduction pathways by varying the lithium-substituted dopant species (Ga, Zn, Ge), thereby blocking Li movement through one of the two paths. The effect of dopant charge and ionic radius on cubic phase stabilization (as a result of Li concentration) and lattice strain is studied.

Moreover, the moisture sensitivity of Li-conductor ceramics has been recently associated with a deterioration of Li transport4 and density of the material, of great importance in battery applications5. In this study, we use an argon-supplied glove box coupled to a furnace for processing and synthesis, preventing proton exchange with Li, thus avoiding the creation of proton charge carriers and improving the densification to above 90% relative density. This is fundamental to analyze the real Li-conduction mechanism and optimize the Li conductivity in garnets. To study the degradation process of lithium displacement by protons in moisture, and the effect of the protons on the ionic conductivity, we conduct isotopic exchange experiments on the samples using H2O and D2O followed by secondary ion mass spectroscopy. The total conductivity of the samples is found by AC impedance in a range of humidities and temperatures. X-ray diffraction and neutron diffraction are employed to determine the structural features, specifically to localize the dopants, Li and protons and to analyse the conduction pathways as a function of the dopant. 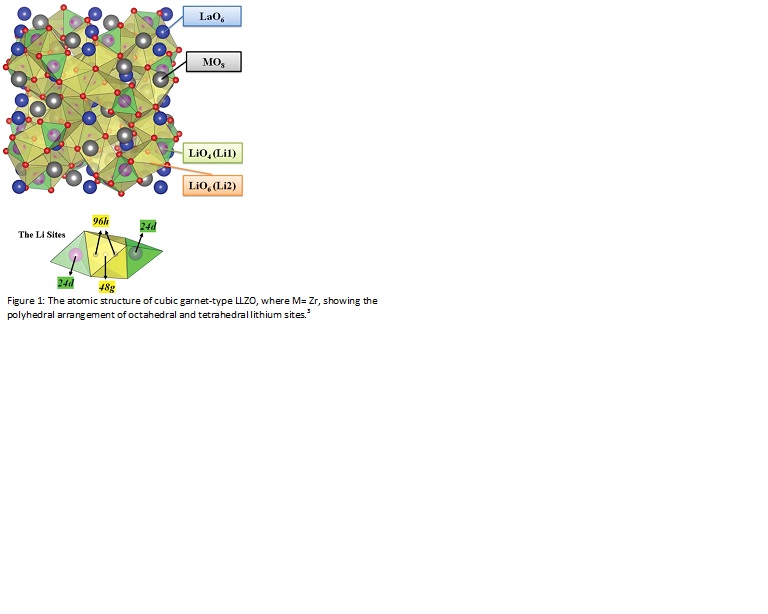