Carron (Scottish Exhibition and Conference Centre)
H. Nakajima (Department of Mechanical Engineering, Kyushu University, I2CNER, Kyushu University) and T. Kitahara (I2CNER, Kyushu University, Department of Mechanical Engineering, Kyushu University)
Lithium ion batteries have the issue of internal short circuiting by the electrodeposition of metal at the negative electrode. This deposition follows the dissolution of metal particles incorporated into the positive electrode in manufacturing process. Thus, we have investigated the dissolution-deposition behavior of metals such as iron and copper using cyclic voltammetry and SEM/EDX. We have also addressed diagnosis method for the incorporation of the metal particles by electrochemical impedance spectroscopy.

Cyclic voltammetry was carried out with positive electrodes of iron plate and copper foil as working electrodes. Current onset potentials originating in the anodic dissolution of iron and copper were around 2.4 V and 3.6 V (vs. Li+/Li), respectively[1]. Hence those metal dissolve during charging of a cell. The anodic current for copper was larger than that for iron．

Iron particle with a diameter of 150 μm, and copper particle with a diameter of 100 μm were adhered to the positive electrode surface. The fully charged cell by 1C with the iron particle exhibited no rapid voltage drop for one week whereas the cell with the copper particle showed rapid voltage drop before full charge, resulting in the short circuit much earlier than iron in agreement with the larger anodic dissolution current shown by the cyclic voltammetry. SEM and EDX observations of the surface of the negative electrode after charging showed iron and copper depositions in torus-shape.

We also repeatedly maintained the cells with those metal particles under fully charged state (SOC:100%) for 24 hours before a discharging/charging cycle to assess the time variation of impedance spectra. As a result, we find characteristic change of the Bode plot for the negative electrode in the case of iron particles between 10-1 Hz as shown in Fig. 1. Since time variation in the impedance spectra was detected, electrochemical impedance spectroscopy is effective diagnosis method to detect the metal particle incorporation.

Fig. 1 Bode plots for the negative electrode (a) with and (b) without the Fe particles. 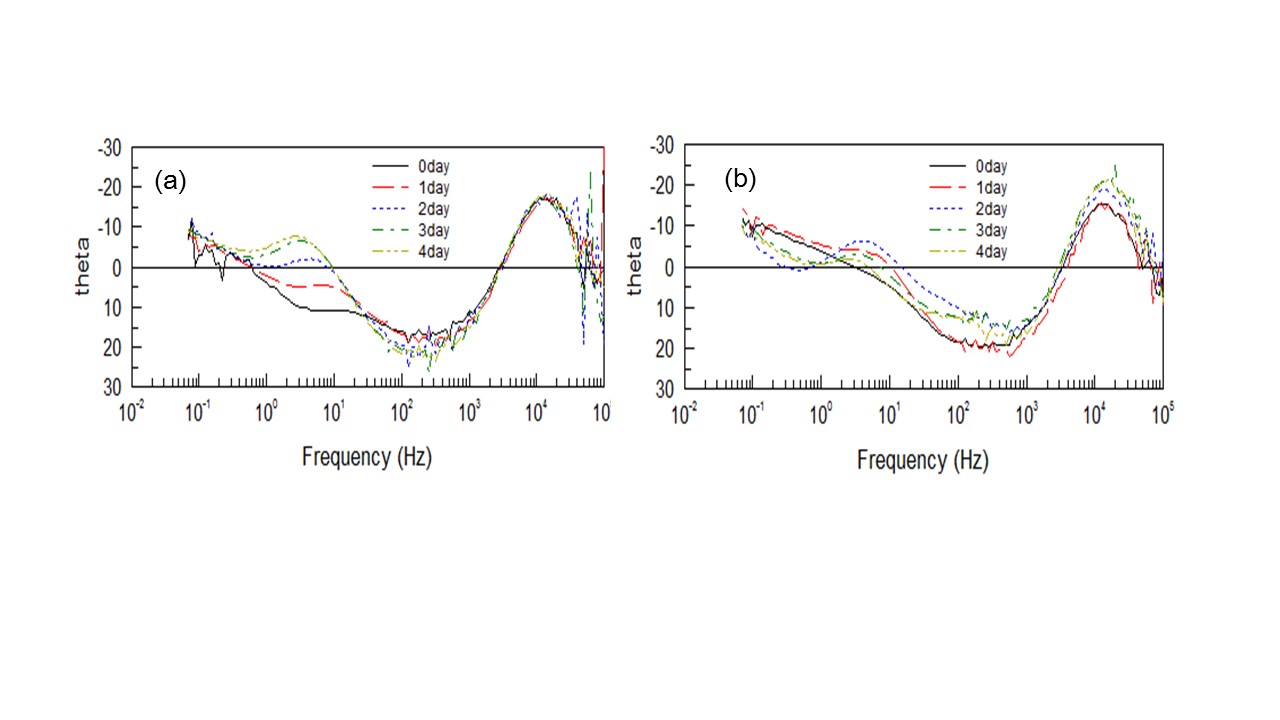