Grand Ballroom East (The Diplomat Beach Resort)
N. Fujiwara (The University of Tokyo), R. Kikuchi (CREST, Japan Science and Technology Agency (JST), The University of Tokyo), A. Takagaki, T. Sugawara (The University of Tokyo), and S. T. Oyama (The University of Tokyo, Virginia Tech)
Electrochemical methane synthesis from CO2 and water is one of the means of storing intermittent renewable energy. It also attracts attentions because it can contribute to the fuel cycle which does not rely on fossil sources. Methane-synthesis solid oxide electrolysis cells (MS-SOEC) can be a candidate technology for such processes. The concept is shown in Figure 1. A novel point of this concept is that CO methanation reaction is integrated into well-known co-electrolysis. The methanation is favoured at relatively low temperature (below 800oC) from the equilibrium viewpoint. It is reported that exothermic nature of the reaction leads to smaller heat loss when combined with endothermic electrolysis, which results in higher round-trip efficiency for energy storage[1,2]. However, the number of experimental researches on MS-SOEC is very limited, and investigation of suitable materials for MS-SOEC is necessary to realize this concept.

In this study, several electrodes were tested for MS-SOEC application. Because anode polarization resistance is dominant in SOEC operation[3], anode materials play an important role. Perovskite-type oxide-based materials are commonly used for SOEC anodes. Among them, LSM (La0.6Sr0.4MnO3-δ) and LSCF-SDC composite (LSCF: La0.6Sr0.4Co0.2Fe0.8O3-δ, SDC: Ce0.8Sm0.2O1.9, LSCF 50wt%) were compared. Electrolyte and cathode were fixed in YSZ (8mol% yttria stabilized zirconia) and Ni-SDC composite (Ni 60wt%), respectively. Electrode pastes were screen-printed on both sides of YSZ electrolyte discs and calcined for 5 hours at designated temperatures. For LSCF-SDC anode, an interlayer of SDC was placed between the electrolyte and the anode using spin coating technique to prevent them to react. Before measurements, NiO in the cathode composite was reduced by hydrogen flow at 1000oC. In MS-SOEC test, 30 mL min-1 air was fed to the anode side while cathode feed gas was CO2(10)/H2O(5)/H2(10)/N2(7) mixture. Figures in parentheses indicate gas flow rate in mL min-1. Hydrogen was added to the cathode gas to stabilize the cell performance. This is a possible condition in industrial operations, because part of the cathode outlet gas can be recycled and mixed into feed stream. Cell operating temperature was set to 800oC. AC impedance measurements were conducted for frequency range of 106~0.1 Hz with amplitude of 10 mV RMS. Current-voltage characteristics were also measured. Cathode outlet gas composition was checked by micro gas chromatograph for open circuit and 1.0 A cm-2 galvanostatic conditions.

With the aim of improving cathode performance, typical cermet of Ni-YSZ was modified by ruthenium impregnation. Ruthenium is expected to suppress nickel oxidation which is likely to occur in oxidizing atmosphere, and also has high activity for methanation reaction. Therefore, it is a promising candidate for MS-SOEC cathode additives. Ruthenium nitrate solution was dropped on calcined cathode of NiO-YSZ|YSZ|LSM cell and dried at room temperature. Ruthenium amount was set to be 5% of cathode weight. Then the cell was kept in nitrogen atmosphere during temperature rising, and at 1000oC, ruthenium precursor was reduced along with NiO by hydrogen flow. AC impedance spectra for cathode were taken in three-electrode configuration at 800 and 600oC, then the data were analyzed by introducing Δ∂Z' spectra[4]. In this experiment, gas conditions were the same as the previous tests.

In all tests, progression of co-electrolysis and methanation were confirmed by gas analysis. According to AC impedance spectra of Ni-SDC|YSZ|LSM and Ni-SDC|YSZ|SDC|LSCF-SDC cells, significantly small non-ohmic resistance was observed with LSCF-SDC anode. Galvanostatic test results in Figure 2 indicate that cell performance was more stable with LSCF-SDC.

Impedance data of the cells with or without ruthenium were compared by calculating Δ∂Z' value. The resultant Δ∂Z' spectra showed peaks around 1~10 Hz. This implies that electrochemical activity was enhanced by ruthenium addition. 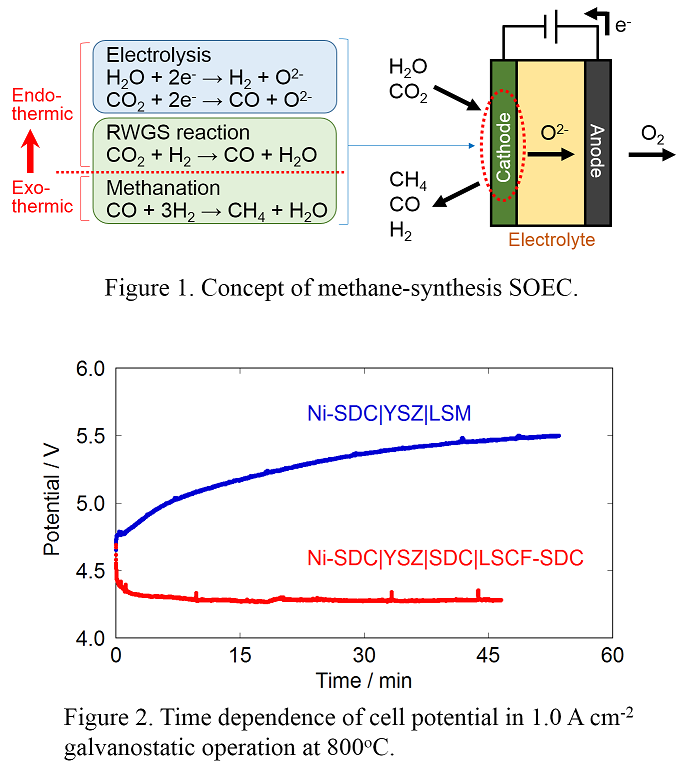