Grand Ballroom East (The Diplomat Beach Resort)
S. Balomenou, K. M. Papazisi (CPERI/CERTH, Thessaloniki, Greece), and D. Tsiplakides (Aristotle University of Thessaloniki, Greece, CPERI/CERTH, Thessaloniki, Greece)
The role of Solid Oxide Cells (SOCs) in the energy sector goes beyond their conventional operation and utilization for electricity generation. A Solid Oxide Cell is a device that can in principle operate in (a) fuel cell mode, i.e for generating electricity through the electrochemical combination of a fuel (e.g. H2, CH4 or CO) with oxygen, and in (b) electrolysis mode, i.e. for the production of fuels (e.g. hydrogen from water, CO from CO2, or syngas from mixtures of water and CO2). Given the versatile operability of a single solid-state device, the need for efficient performance and stability, is crucial. Any Reversible SOC (rSOC), as shown in Figure 1, operating on the CO2 cycle (SOEC mode: electrolysis of CO2, SOFC mode: electrochemical reaction of CO and oxygen for power generation), faces similar problems regarding degradation and carbon built up, as in the case of SOFCs operating on C-containing fuels. In this context, the performance, tolerance to carbon deposition, reversibility and stability of doped lanthanum chromite ceramic electrodes (LSC-M) [1, 2], under cycling operation between CO2 electrolysis (SOEC mode) and power generation through the electrochemical reaction of CO and oxygen (SOFC mode), is discussed. During this study it is concluded that although the state-of-the-art Ni-YSZ electrode presents high activity for both CO2 electrolysis and CO/CO2 vs. O2 fuel cell operation, it suffers from significant degradation initiated during electrolysis of CO2 and resulting in >50% performance loss within the first complete cycle of measurements. This severe degradation is a combined result of the instability (coarsening) of Ni-YSZ in CO-CO2 environment as well as of the evolvement of carbon deposition, in the form of Ni carbonyls. The later species are highly volatile, making it important to choose operating conditions for which carbonyl formation is less favourable. Moreover, Ni-YSZ composites are prone to degradation by re-oxidation caused by exposure to pure CO2. On the contrary, the synthesized LSC-M perovskites present a significantly stable performance. The steady state IV curves and AC impedance measurements of the prepared cells under CO2 splitting and CO oxidation revealed the superior performance. Cells with LSCF show high initial performance in CO2 SOEC and CO/CO2SOFC operation and exhibit remarkable stability and reversibility under cycling between operation modes.

The authors would like to acknowledge financial support from the European Space Agency (ESA Contract: 4000108849/13/NL/ΕΚ) and the European Union’s Fuel Cells and Hydrogen 2 Joint Undertaking (SElySOs project, Grant Agreement No. 671481). 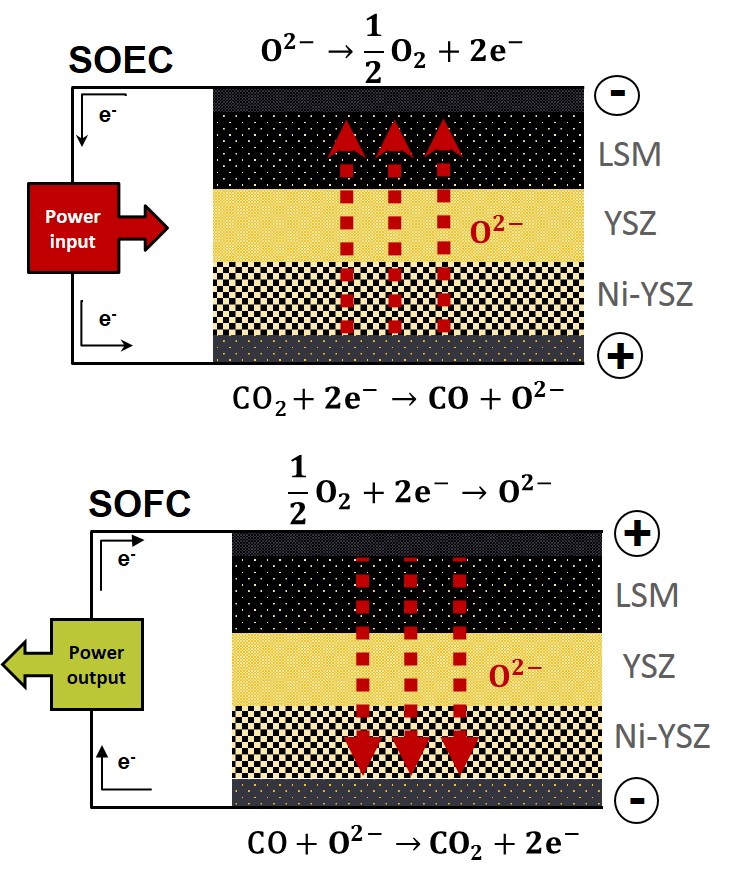