Lake, Ground Level (Hilton Orlando Bonnet Creek)
D. J. Lockwood, N. L. Rowell (National Research Council Canada), A. Gouyé, L. Favre, A. Ronda, and I. Berbezier (Institut Matériaux Microélectronique Nanosciences de Provence)
Light emission from Si nanostructures has been of great interest for some time now owing to the need for silicon-based light sources for applications in silicon photonics.  Both Si and Ge possess indirect band gaps, which makes them very inefficient light emitters. Band gap engineering has been proposed as one way to overcome this limitation and although light emission with greatly improved efficiency has been obtained at low temperatures the emission at room temperature is still very weak, because of exciton dissociation. Recently, through employing novel band gap engineering computations, entirely new Si/Ge [M. d’Avezac, J.-W. Luo, T. Chanier, and A. Zunger, Phys. Rev. Lett. 108, 027401 (2012)] and Si [H. J. Xiang, B. Huang, E. Kan, S.-H. Wei, and X. G. Gong, Phys. Rev. Lett. 110, 118702 (2013)] supercell structures possessing direct gaps have been proposed.  According to d’Avezac et al., a SiGe2Si2Ge2SiGen superstructure should have a direct and dipole-allowed gap of 0.863 eV, which is ideally suited for optical fiber data transmission applications. Here we report on the growth of such a structure and its optical properties. Two similar samples were prepared by different growth methods: molecular beam epitaxy (MBE) and solid phase epitaxy (SPE). In both samples the superstructure (terminated with n = 12 monolayers of Ge) was grown on a 30-nm thick buffer layer of Si0.4Ge0.6 on a 5 µm thick relaxed buffer layer of Si0.4Ge0.6on a 750 µm thick (001) Si substrate. The photoluminescence (PL) spectra were measured using a Bomem DA3 FTIR spectrometer, with the samples excited at low temperatures with either 70 mW of 405 nm or 35 mW of 458 nm laser light.

Photoluminescence (PL) spectra obtained at 6 K with excitation at 405 nm are shown in Fig. 1. Similar spectra were obtained with 458 nm excitation. No PL was detected from the two samples in the energy range 1000-1850 meV or at room temperature. The sharp drop at low energy near 700 meV is due to the cut-off in the instrumental response. A strong low-energy PL doublet is seen, with peaks near 780 and 820 meV, together with a much weaker peak at 872 meV. The ratio of intensities of the strong and weak peaks is the same in both samples. The intensities of all three PL peaks decrease with increasing temperature up to 25 K, but the weak peak decreases in intensity faster than that of the strong peaks. The weak peak at 872 meV is most likely the dipole-allowed direct-gap transition expected at 0.863 eV in the superstructure. The small difference in energy between theory and experiment could be the result of a difference in strain within the layer in the sample compared with the ideal (perfect) modeled structure or from assumptions in parameter values in the model. The strong peaks at 820 and 780 meV are assigned to the no-phonon and transverse-optic-phonon emission lines, respectively, of the Si0.4Ge0.6 buffer layer. The ~40 meV separation between the two strong peaks is characteristic of the phonon energies in SiGe alloys. The energies of the peaks, however, are much lower than that expected for a bulk Si0.4Ge0.6 alloy (~0.97 eV). The energies and general appearance of these peaks is reminiscent of what has been obtained from PL studies of SiGe nanostructures imbedded in Si. It is therefore likely that this PL arises predominately at the Si0.4Ge0.6/superstructure interface where there is type-II band alignment. In conclusion, we have obtained experimental evidence of the predicted direct-gap optically-allowed transition in a special supercell comprised of a number of ultrathin layers of Si and Ge. 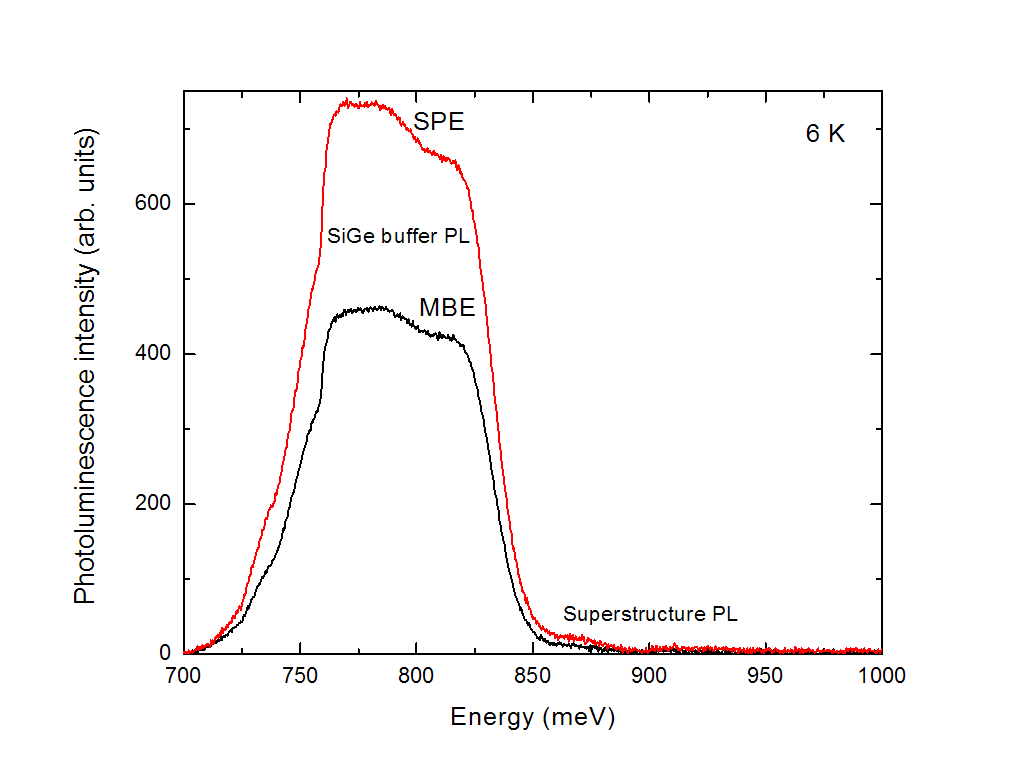