The FCGR behavior of ultrahigh -strength carbon steel, grade UD-165, was investigated by monitoring crack growth rate in deaerated 5%NaCl solution buffered with NaHCO3/Na2CO3 and in contact with H2S. The partial pressure of H2S (pH2S) was 0.83 kPa and pH of the solution was 7. The fatigue experiments were performed on ½T-CT specimens at 20°C at a stress ratio (R) of 0.13 and stress intensity factors (ΔK) of 219.8 and 153.5 MPa√cm, respectively, in an autoclave with surface investigations augmented by scanning electron microscopy (SEM), elemental x-ray mapping and energy dispersive x-ray (EDX) spectroscopy. Research focused on understanding the influence of environment on crack growth rate by examining the crack path in exposed specimens.

Samples in this study failed catastrophically along the crack after they were removed from the autoclave. Figure 1 shows a secondary (SE) SEM micrograph of the fracture surface after the FCGR testing at ΔK=219.8 MPa√cm. It appears that the failure mode is transgranular. Also, few pits are observed on the fracture surface.

The micrograph of the fracture surface sample after the fatigue test at ΔK=153.5 MPa√cm under sour conditions with pH=7 at 20°C, Fig. 2, looks different from that surface tested at ΔK=219.8 MPa√cm in the same solution.

Relatively dense corrosion products covered relatively large areas of the sample. Around these crystalline-like structure is observed. The latter is characteristic of intergranular failure.

It appears that at 219.8 MPa√cm , fracture is mainly transgranular, while at 154.5MPa√cm an intergranular fracture is the primary mode of failure. 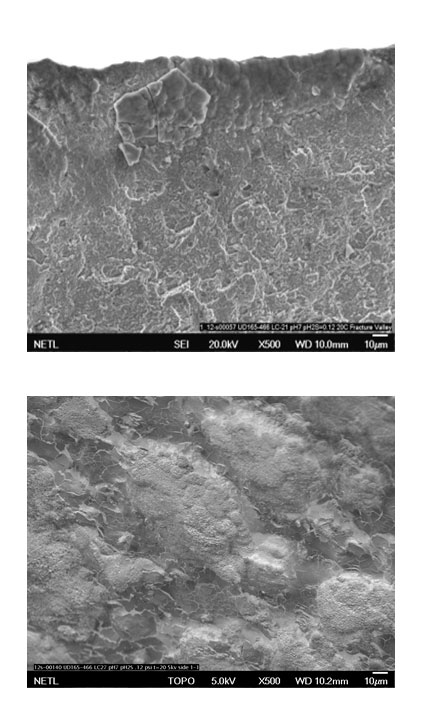