Platinum is one of the most important materials for various applications, and structure and properties of low index surfaces of single-crystal platinum have been extensively studied not only in ultrahigh vacuum (UHV) [1,2] but also in electrochemical environments [3-5]. It is very important to know potential dependent structures at Pt single-crystal electrode surface, especially in pre-oxide potential region, in situ, because of application for polymer electrolyte fuel cell (PEFC) as a cathode catalyst. Since there are few surface techniques to investigate the interfacial structures in situ, however, they have not been made clarified yet.

The surface X-ray scattering (SXS) technique is one of the best methods to investigate the three-dimensional (3D) interfacial structure at an atomic level. Many in situ  structural studies at electrode/electrolyte interfaces using the SXS technique have been carried out in the last 2 decades. For example, we determined the potential dependent structures at Au(111) and Au(100) single-crystal electrode/sulfuric acid electrolyte interfaces using this in situ technique [6].

In this study, the potential dependent structures of single-crystal Pt(111) electrode in perchloric acid and sulfuric acid electrolyte solutions in the potential regions between 0 V and +0.8 V (vs. Ag/AgCl) were investigated by in situ SXS measurements.

Prior to each measurement, the Pt(111) disk was annealed at 1600°C for more than 1 hour using induction heater under argon/hydrogen atmosphere, and then quenched by ultrapure water saturated with argon/hydrogen. After that, the Pt(111) disk was set to the home-made SXS cell [7], the SXS cell was set to the 6-axes diffractometer, which was installed at undulator beamline BL3A in Photon Factory, and then in situ SXS measurements were carried out.

Figure 1 shows (00) rods of the Pt(111)/HClO4 interface measured at 0 V and 0.8 V. Based on the fitting of these data, we confirmed that at 0 V in  hydrogen UPD potential region, layer distance between first and second outermost Pt layers is expanded by ca. 3 % because of strongly adsorbed hydrogen. We also found that at 0.8 V where pre-oxidation is completely finished, oxygen species are adsorbed at an atop site on the Pt(111)-(1x1) surface with a (1x1) structure. Detailed structure analyses at the other potentials, potential dependent structure analyses at Pt(111)/H2SO4 interfaces, and their dynamic studies are now under investigation.

This work was supported by and conducted at the Global Research Center for Environment and Energy based on Nanomaterials Science (GREEN) in NIMS. 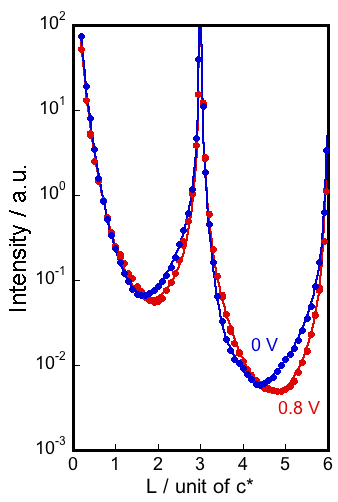