Hamilton, Ground Level (Hilton Orlando Bonnet Creek)
Z. M. Pavlovic (Max Planck Institute For Chemical Energy Conversion) and C. Ranjan (Max Planck Institute for Chemical Energy Conversion)
In oxygen electrocatalysis, hydrous oxides are common occurrence but less studied part of electrochemical literature. Most of these oxides naturally form in situ during the reaction.  The exact structure of hydrous oxide, its catalytic properties and its stability are very critical to understanding the nature of the real catalyst. This knowledge will allow us to develop better catalysts based on iridium and possibly reduce the amount of noble metal involved.

We have built a setup for in situ surface Enhanced Raman spectroscopy. We deposited hydrous iridium oxide on Au. We have followed the Ir-OH peaks and its behavior over various potentials to investigate the potentials dependent property of the oxide. We followed the dominant peak at 520 cm-1 over potentials ranging from 0.4 to 1.8V. The peak shows expected tuning in response to applied electric field. Potentials 1.6V and higher are potentials where considerable evolution of oxygen happens. The shifting of this peak to higher values (stronger bonds) can be linked to higher charge on the Iridium center. The differential tuning of Raman shifts with respect to the applied potential are used to establish the points of charge transfer.

DFT calculations were performed in conjunction with isotope substitution studies to interpret the experiments. The peak at 780 cm-1 appears at 1.4V and grows in intensity till 1.8V (beyond which the potential was turned off). This is the potential regime for oxygen evolution. This peak at only exists under applied potential regime of oxygen evolution and goes away as soon as the potential is removed and an open circuit is established. This experiment reiterates the importance of in situ studies in the context of electrocatalysis. 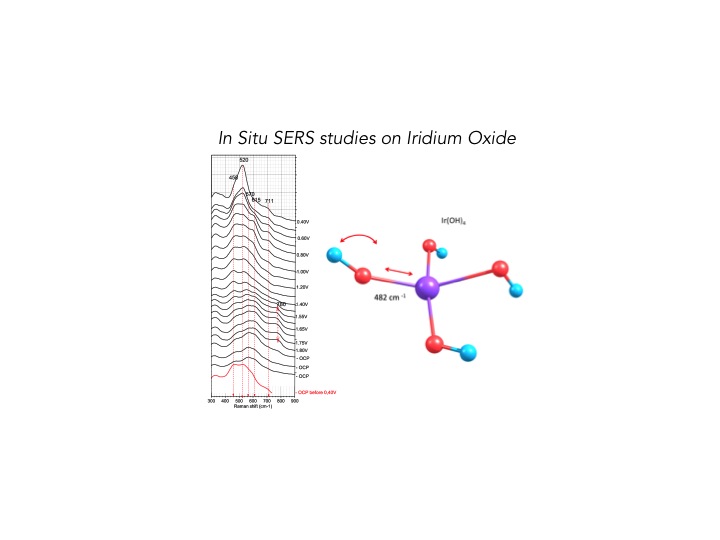