Hamilton, Ground Level (Hilton Orlando Bonnet Creek)
T. Gross and C. Hess (Technical University Darmstadt)
The potential of Raman diagnostics for spatially-resolved and in situ diagnostics of lithium-ion batteries is demonstrated. Focus is put on LiCoO2 electrode materials, which were investigated in detail as composites of LiCoO2 with binder (PVdF) and conductive (carbon) additives. Besides the LiCoO2 active mass, Raman spectroscopy allows to detect carbon and PVdF-related bands as well as electrolyte bands [1].

Detailed wavelength-dependent analysis reveals the first observation of a resonance Raman effect for LiCoO2-based materials for green (514 nm, 532 nm) laser excitation. The resonance effect is confirmed by a dependence of the A1g and Eg phonon band intensity ratio on excitation wavelength and the occurrence of an overtone of the A1g band for green excitation.

Raman spectra recorded under electrochemical conditions are largely invariant regarding the degree of lithium de-/intercalation indicating no significant structural changes on the surface of the active mass particles. To this end, Raman experiments are complementary to X-Ray diffraction experiments. Interestingly, spatially resolved Raman analysis (Raman mapping) of LiCoO2 composite electrodes demonstrates the redistribution of active mass and carbon components during electrochemical cycling. To this end, Fig. 1 shows the results of an in situ Raman mapping of a LiCoO2 composite electrode (85% LiCoO2, 10% PVDF, 5% carbon black) before and after four cycles at C/12 rate. Interestingly, our results reveal that the chemical redistribution is correlated with changes in the LiCoO2 phonon band intensities. In particular, within areas small chemical redistribution only small variations in the A1g/Eg intensity ratios before and after cycling are observed, whereas areas of large chemical redistribution show significant changes of A1g/Eg intensity ratios from typically 2.0 (before cycling) to 1.5 (after cycling). This behavior strongly suggests that the chemical redistribution is accompanied by changes in the electronic structure of the active mass particles.

Current mapping experiments focus on changes in the behavior between the first and subsequent cycles to gain insight into the processes occurring during SEI formation. Additional information is expected from the evaluation of the Raman background showing systematic intensity variations during lithium de-/intercalation.

Our results highlight the potential of Raman diagnostics to contribute to the ongoing discussion on the mode of operation and degradation of lithium-ion batteries due to its ability to deliver spatially resolved and in situ information. 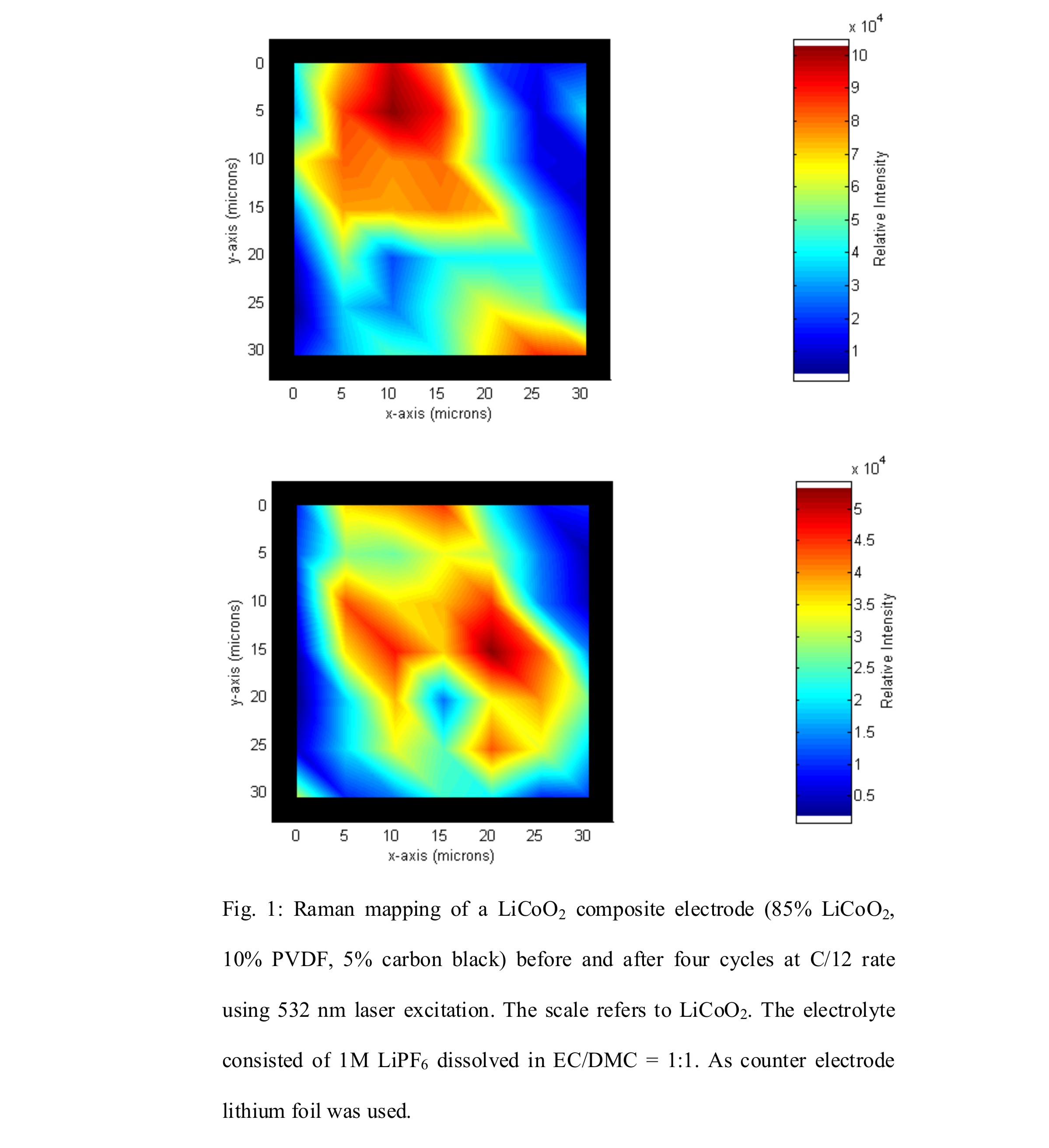