First principles molecular dynamics was used to simulate the interface between Pt(111) surface and sulfuric acid solution. Electric bias was applied by the ESM method [3,4]. An orthogonal unit cell of 8.38x9.67x26.04 Å3 in size was used with SO4groups, enough water layers and hydronium ions in the unit cell to mimic solution phase. A three-layer Pt slab was employed and only the bottom layer is fixed during molecular dynamic simulation.  A cell with 12 atoms in each layer was used to simulate the single (bi)sulfate anion adsorption. In order to do simulation at the high surface coverage (adlayer), we have adopted the larger cell that has 20 Pt atoms each layer. Generalized gradient approximation (GGA) with PBE parameterized exchange-correlation function was employed in the MD simulation. The simulation was done by the plane wave pseudopotential package of “Simulation Tool for Atom Technology (STATE)[5]” with ultra-soft pseudopotential. A 2x2x1 k-point mesh is generated by Monkhorst Pack scheme.

In order to clarify the controversies over the vibrational spectra, the important contributions from electric bias, adsorption conformation, adsorption species, and solvent are included in these simulations. We observed reversible transition between two-point and three-point binding at a certain bias. Vibrational spectra of SO4 and water molecules were also calculated by Fourier transformation of velocity auto correlation function and compared with experimental and previous simulation results [6,7]. Vibrational mode analysis shows the band at 950 cm−1 corresponds to the breathing mode of SO4, and the band at 1250 cm−1corresponds to the stretching mode between unadsorbed-O and S in the three-point adsorbed sulfate anion.  We also point out the problem of simple water bilayer models during the study of Stark effect. 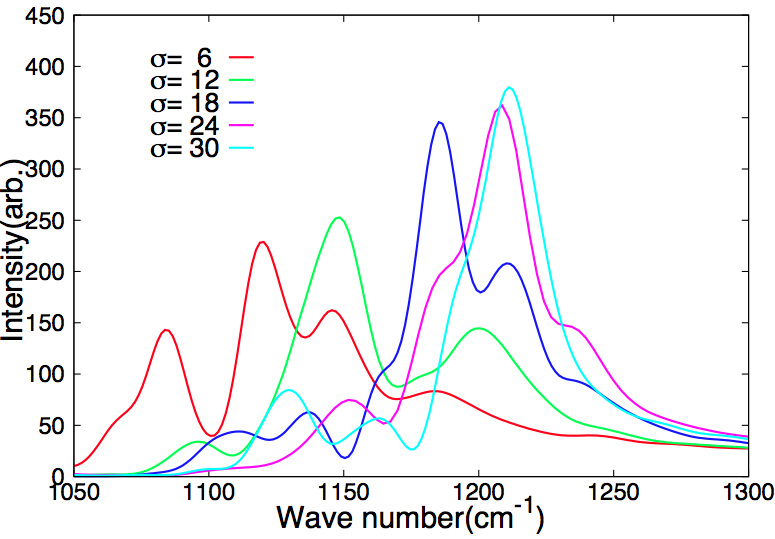