Wieckowski and coworkers first observed some of the interesting electrochemical behavior of Pt(111) surfaces in CO-saturated solution, particularly, the decreasing activity for CO oxidation [1]. In Part (1) of the present work, we show that monatomic steps on Pt(111) single crystal surfaces are quite varied, with a range of structures and electrochemical behavior, in contrast to the conventional idea that “steps” in general are active for CO oxidation.  The most striking finding was that (111)-type steps, which were initially ragged and highly active, became absolutely straight and nearly inert for CO oxidation after cycling the potential in CO-saturated acid solution [2].  However, (100)-type steps were initially much less active and became even less active, even though the steps developed nanoscale indentations.

Density functional theory calculations were carried out to determine, first, why the steps tend to favor the (111) geometry, and second, why certain step geometries are so inert.  We have also identified certain candidates for the actual active site for CO oxidation. Specifically, we have found that CO molecules can adsorb in highly ordered, high coverage arrangements, even across steps, if the steps are reasonably ordered, so that there is essentially no access to the Pt surface for water molecules. The only exception appears to be single Pt atoms that are adsorbed at the edge of a (111) step, according to the calculations and also indicated by the experiments. If even a single Pt atom is adsorbed next to a (111) step, there is a disturbance of the protective CO adlayer.

Markovic and coworkers had previously concluded that single Pt atoms can be highly active, based on ex situ STM studies and DFT calculations [3], but the present in situ study allows us to achieve a new level of understanding of the structure-activity relationships of various step structures on the Pt(111) surface.

It has been realized for a number of years that ordinary DFT calculations have difficulty in correctly identifying the site preference of CO adsorbed on Pt(111), but first Olsen et al. [4] and then Orita et al. [5] showed that high-quality, all-electron, relativistic calculations are able to do so. In the present work, we took advantage of this capability in calculating high-coverage arrangements of CO on the various types of terrace and step structures (Fig. 1). The structures pictured show the highly protective nature of the CO adlayer across steps, if they are straight.  There are also microfacetted structures, similar to those obtained experimentally for the cycled (100) steps, for which the CO adlayer is quite protective. As we will show, the correspondence of the calculations and the experimentally observed STM images has been quite satisfactory and convincing [2].

Acknowledgement: The authors gratefully acknowledge support from MEXT and NEDO of Japan.

Fig. 1. High coverage CO adsorption across (upper panel) (111) steps on Pt(332), and (lower panel) (100) steps on Pt(322), with atop CO molecules colored yellow, as they appear in corresponding STM images. The steps are located at the vertical white lines. 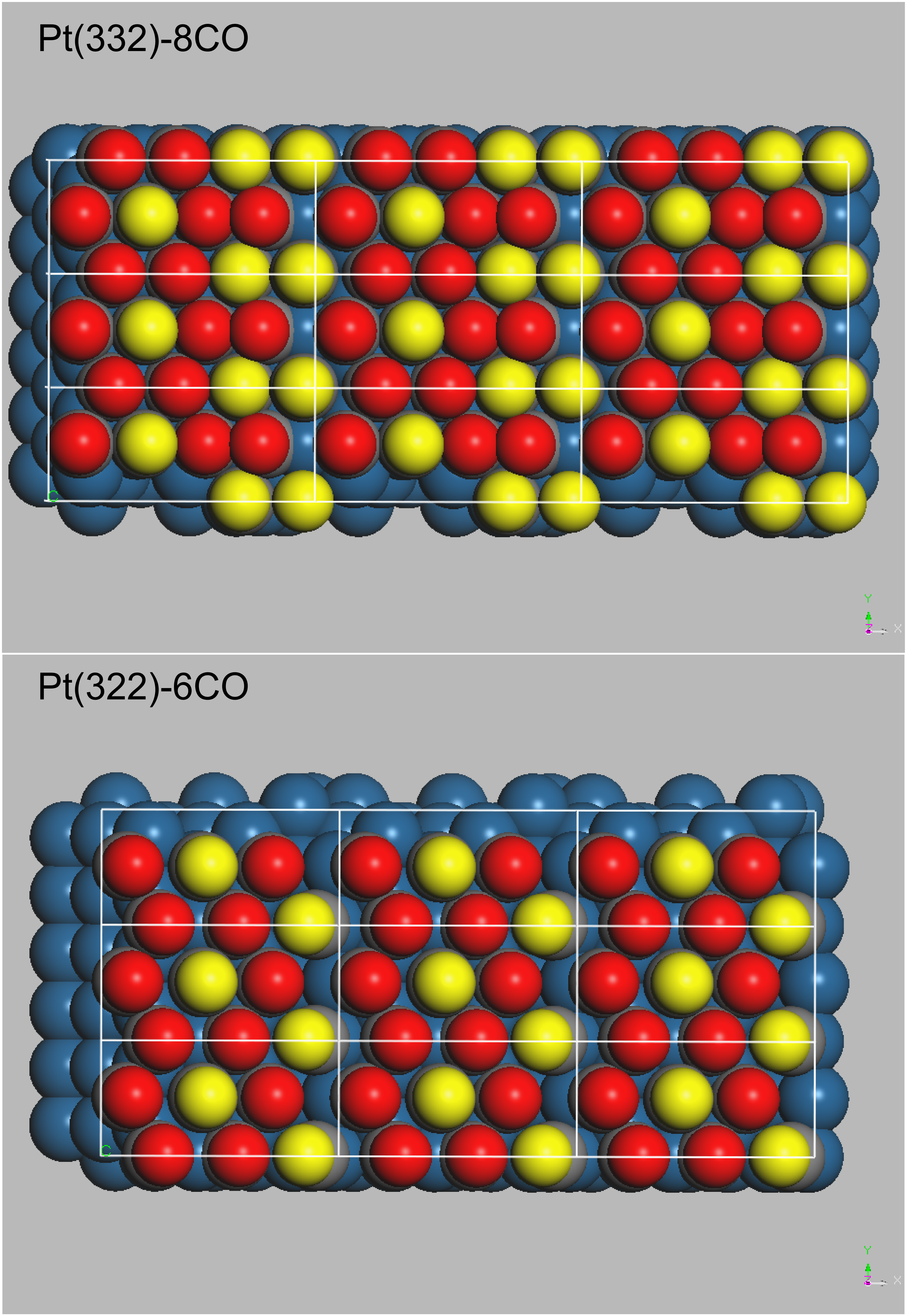