Floridian Ballroom F, Lobby Level (Hilton Orlando Bonnet Creek)
J. Inukai, D. A. Tryk, M. Wakisaka (Fuel Cell Nanomaterials Center, University of Yamanashi), H. Uchida (Clean Energy Research Center, University of Yamanashi), and M. Watanabe (Fuel Cell Nanomaterials Center, University of Yamanashi)
The mechanism of the adsorption and electrochemical oxidation of CO in electrolyte solutions on Pt catalysts has long been studied. Significantly enhanced CO oxidation has been observed in the presence of a CO adlayer preadsorbed at low electrode potentials, giving rise to a well-known prepeak in the CO stripping voltammogram prior to the main CO oxidation peak. Evidence was presented to show an effect of the defect sites on the Pt(111) surface on the characteristics of the prepeak.1) Wieckowski and coworkers extensively investigated the role of defects for the CO electrooxidation in alkaline media,2) and Strmcnik et al. reported that platinum surfaces modified with platinum nanoislands have a high activity for CO oxidation at prepeaks.3) In the present study, the CO electrooxidation at Pt(111)-oriented surfaces with steps is investigated by combining electrochemical measurements and electrochemical  (EC) STM.3)

Single-crystal beads of Pt were made by crystallization of molten balls formed at the end of Pt wires in a hydrogen–oxygen flame. The (111)-oriented planes were exposed by mechanical polishing. The surfaces were then heat-treated in an infrared imaging furnace and cooled under hydrogen. The electrochemical measurements were carried out in 0.1 M HClO4. EC-STM measurements were carried out using a CO- or N2-saturated solution under a CO atmosphere. For the reference electrode, an RHE was used.  Fig. 1(a) shows voltammograms obtained in CO-saturated HClO4 on Pt(111) with (111) steps The CO oxidation started at ca. 0.4 V in the prepeak region. After the electrochemical potential was cycled between 0.05 and 0.95 V 30 times, the prepeak observed at lower potentials completely disappeared.4) By examining CO stripping voltammograms with and without CO in solution (Fig. 1(b)), it was suggested that the origin of this prepeak is the oxidation of bulk CO in solution. Fig. 2 shows the STM images at a (111) step on Pt(111) recorded before and after the potential cycling. The (2x2) structure of the CO adlayer is clearly seen. Before the potential cycling, the step has defects, forming a zigzag line (Fig. 2(a)). After the potential cycling, the step became very straight running in the [110] direction, with no defects observed (Fig. 2(b)). The structure change at steps should be related to the reactivity. On Pt(20 19 19) with (100) steps, the prepeak was very small, and after the potential cycles disappeared completely. Fig. 3(a) shows an STM image on Pt(20 19 19) before cycling. The step is straight, which might explain the small prepeak on pristine Pt(20 19 19). Fig. 3(b) shows an image after the potential cycles. The (111) microsteps were introduced to the (100) step, and the step became zigzagged. From the results on Pt(111)-related surfaces with different steps, it can be understood that not every defect is active for the electrooxidation of CO in solution.

This research was supported by MEXT and NEDO, Japan. 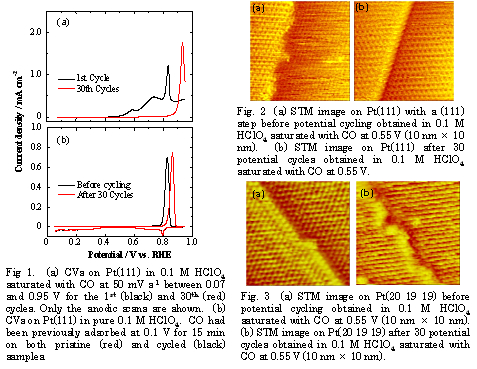