Grand Foyer, Lobby Level (Hilton Orlando Bonnet Creek)
V. Kolosnitsyn, E. Kuzmina, S. Mochalov, A. Nurgaliev, and E. Karaseva (Institution of the Russian Academy of Sciences Institute of Organic Chemistry of Ufa Scientific Centre of the Russian Academy of Sciences)
The studies of thermal effects of cycling and storage of lithium-sulphur cells have significant value to development of energy storage systems on the base of new electrochemical systems with high specific energy. One of the most promising electrochemical systems is lithium-sulphur system.

To study of thermal effects of electrochemical cells we designed and built specialized instrument “Electrochemical calorimeter”. It simultaneously records thermal and electric characteristics of planar cells under polarisation. The instrument includes calorimetric block, potentiostat and control block. The measurements of thermal effects are carried out in isoperibol mode. The accuracy of temperature stabilization is ± 5∙10-4K. The temperature range is 253-363 K. The measurement accuracy of heat flow is 50 µW. The relative error of current stabilization is 0.1 %. The voltage measurement error is 10 μV.

We studied the thermal effects of charging and discharging of the lithium-sulphur cells by designed instrument.

The test subjects were the lithium-sulphur pouch cells. Lithium foil (99.9%) with a thickness of 100 μm was used as negative electrodes. The working electrodes were sulphur electrodes (70% of Sulphur, 10% of Carbon and 20% of poly(ethylene oxide)). One layer of micro porous membrane Celgard® 3501 was used as a separator. The electrolyte was 1M solution of LiCF3SO3in sulfolane.

There are two maximums of heat generation during discharging of lithium-sulphur cell (Fig. 1). The first maximum has complex shape and correlates to the transition between high and low voltage plateaus of discharge curve. The second maximum is observed at the end of discharging.

The comparison between curves of heat generation (Fig. 1c) and internal resistance (Fig. 1b) during discharging of lithium-sulphur cells makes it possible to conclude that first maximum is caused by polarization heat and Joule heat and thermal effects of chemical and electrochemical reactions. The second maximum is caused by the polarization heat and Joule heat.

The analysis of heat flow, internal resistance and charge curves allows to conclude that first maximum of heat generation is caused by the polarization heat and Joule heat. The heat absorption corresponding to the transition between high and low voltage plateaus of charge curve is possible to be caused by physicochemical and chemical process accompany the electrochemical oxidation of low ordered lithium polysulphides. The intensive heat generation is likely to be caused by chemical reaction of sulphur or high ordered lithium polysulphides and metallic lithium at the end of charging of lithium-sulphur cell. 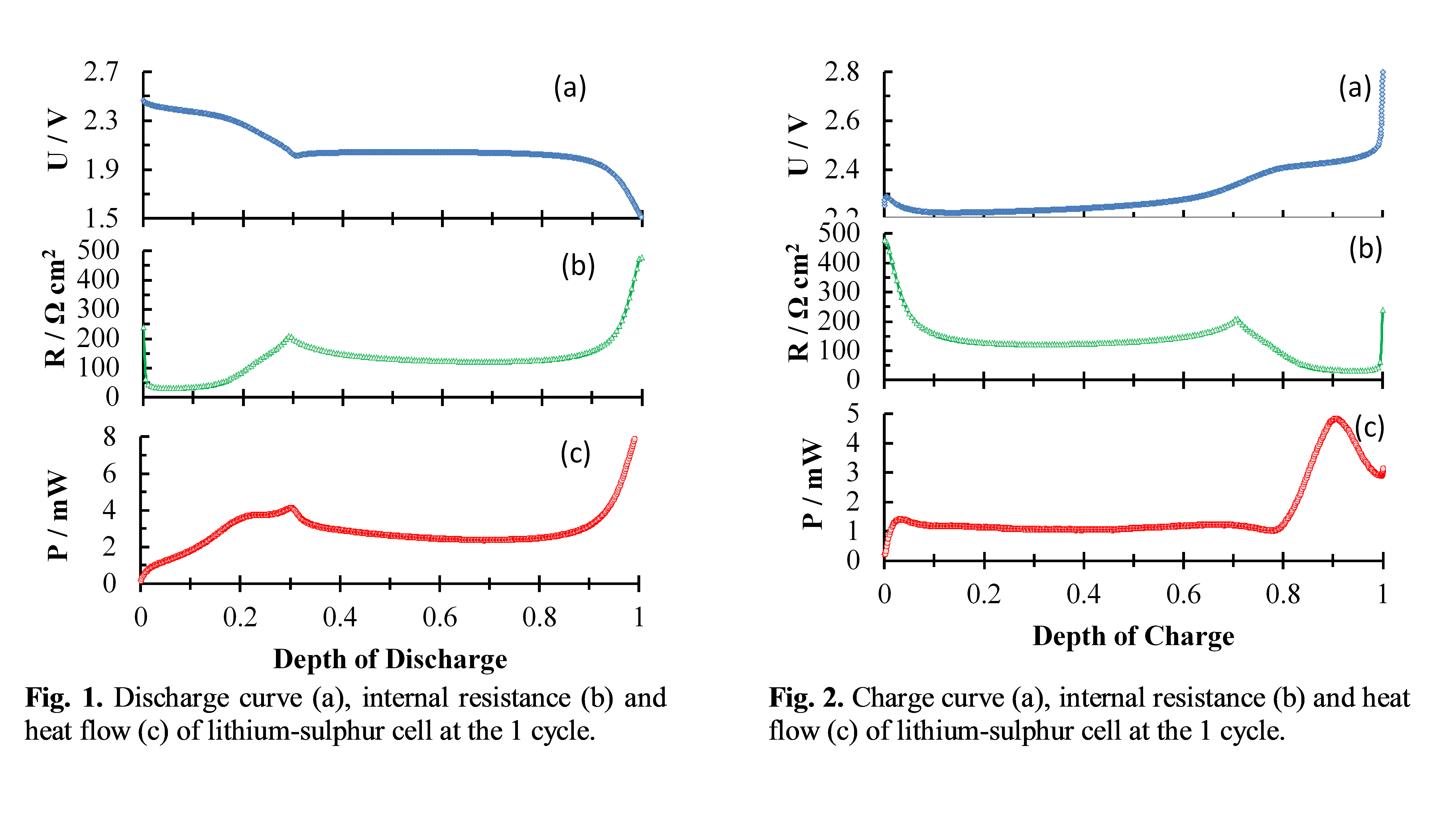