Grand Foyer, Lobby Level (Hilton Orlando Bonnet Creek)
V. V. Bevara and P. Andrei (Florida State University)
In the last few years, Lithium air batteries with organic electrolyte have received much attention because of their potential applications in systems requiring large storage elements, such as in renewable energy storage or electric vehicles. Although the theoretical energy density of these batteries is relatively high, the experimental values are usually much lower. This fact is generally attributed to two phenomena: (1) the discharge product (e.g. LiO2, Li2O2, etc.) deposits in the cathode and fills in the pores at the air side, in this way blocking the transport of the oxygen from the outside, and (2) the resistivity of the discharge product is high and the ohmic losses become too large. In this second case, quantum tunneling is believed to be responsible for the transport through the deposit layer when the thickness of this layer is less than 5 -10 nm. In this presentation we develop a new analytical model that takes into account both the Faradaic effects and the resistivity of the discharge layer by employing a quantum approximation of the transport through the discharge layer. A very good agreement is obtained between our analytical approach and the more computationally intensive, finite-element simulations, in which the full transport model is solved, including the diffusion of the oxygen, diffusion and conductivity of the electrolyte ions, electron conductivity, and variation of porosity. 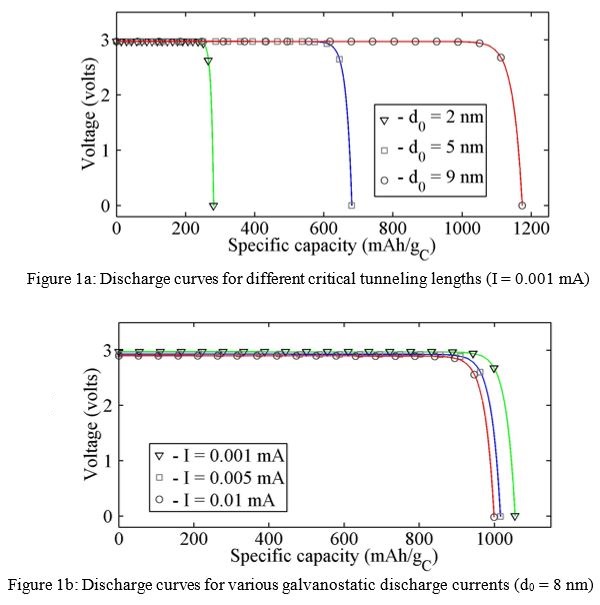