Bacteria-electrode interactions represent an important set of parameters that influence biofilm formation, which in turn, will dictate substrate oxidation, current production, and metal oxide reduction rates1. Furthermore, it has been reported that the degree of hydrophilicity of the electrode significantly influences biofilm formation and MFC performance2.

Previous work indicates that biofilms of Shewanella anaerobically formed on carbon felt electrodes by applying external potential of -0.3V vs Ag/AgCl for 24 hours exhibit significantly higher current densities than those 5-hour biofilms3. Furthermore, it has been reported that current generation strongly depends on the electrochemical accessible surface area of the electrode, i.e. the carbon structures utilized as working electrodes.

For this study, we looked at surface modifications that can increase anode hydrophilicity and contribute to the enhancement of its electrochemical accessible surface area (ECSA). Carbon felt material has been chosen for these electrode characterization studies due to its high surface area. UV/ozone treatment has been preformed on the carbon electrode surface, making these electrodes more hydrophilic, thus yielding significant increase in biofilm formation (Fig. 1) and current production. Oxygen containing groups were introduced at the surface of the carbon felt with this simple modification procedure. The performed XPS studies showed a direct correlation between UV/ozone exposure times and oxygen content (Table 1). Cyclic voltammetry of the ozone-treated carbon felt electrodes prior to bacterial inoculation also indicated increase of the ECSA with increasing UV/ozone exposure until 20 min of ozonation, after which the ECSA decreases most likely due to surface disruption.

The electrochemical studies of Shewanella anodes modified for different ozonation periods showed that the 20 min exposed electrodes performed the best. During the anode polarization, a current of approximately 60 μA was generated, which represented three times higher the current from our previously reported achievements3(Fig. 2).

Contact angle measurements were carried out to study the changes of the surface hydrophobicity as a function of ozonation time. Bacterial coverage was calculated based on the SEM images, taken after the electrochemical studies. The riboflavin production during electrodes polarization was also monitored, as it was previously demonstrated3. Information from XPS analysis along with contact angle measurements, riboflavin content, bacterial coverage and ECSA were combined and processed through principal component analysis  (PCA) in order to identify the most important parameter possessing the biggest impact on the final anode performance. This procedure is a valuable tool for the process of information to be used for further anode optimization. 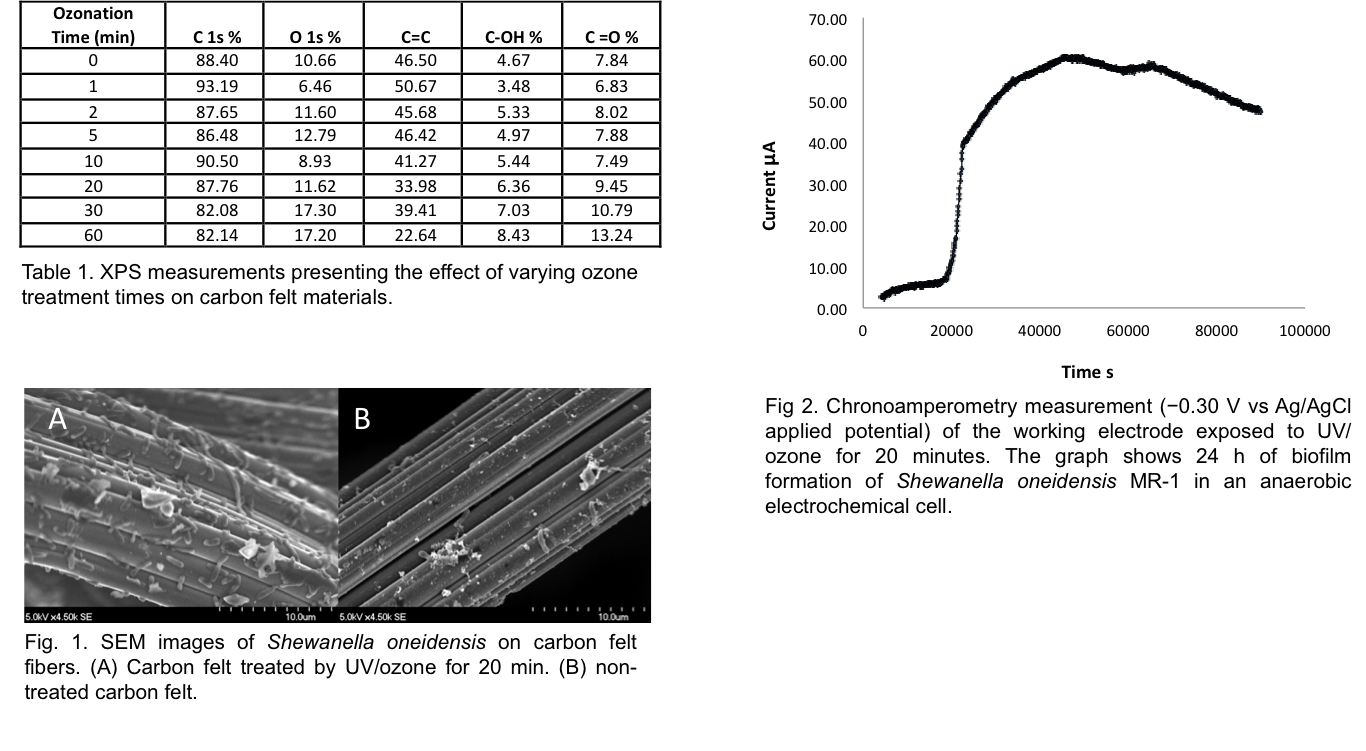